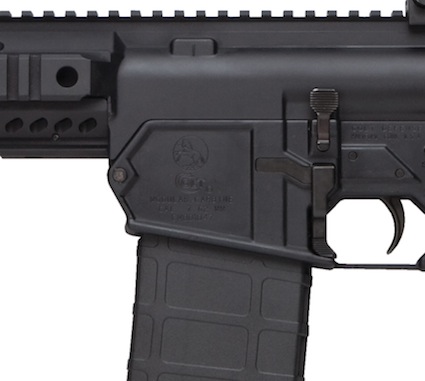 This modular, multi-caliber rifle is top quality and multifaceted. With a simple swap of the upper receiver, the chambering can be altered from .308 Winchester to .223 Remington, making the Colt LE901-16S a versatile rifle for a variety of shooters. Outdoorsmen who need a versatile hunting weapon, sport shooters seeking a high-performing target rifle and tactical professionals seeking an accurate shot in a sniper situation will all find what they are looking for in the Colt LE901-16S.

Colt Defense LLC, one of the world’s leading designers, developers, and manufacturers of rifles and carbines, will bring to market the highly anticipated LE901-16S modular, multi-caliber rifle. The Colt LE901-16S was built with both the tactical professional and modern sportsman in mind. This rifle will be offered in black, with other finishes available later in the year, and has superior accuracy. This modular rifle can be easily changed from .308 Winchester (7.62×51 NATO) chambering to .223 Remington (5.56×45 NATO).

“This is an exceptional rifle for a wide variety of shooters due to the interchangeability in caliber,” said David Ridley, Vice President of Colt Defense, LLC, “With a simple swap of the upper receiver shooters can switch to the caliber they need for the shot they want to achieve.”

In the classic .308 Winchester (7.62×51 NATO), the LE901-16S is chambered perfectly for a tactical professional’s sniper shot, civilian shooters’ target practice or a hunter’s big-game shot. With a simple swap of the upper receiver and buffer system, this versatile rifle’s chambering can be changed to .223 Remington (5.56×45 NATO) and transition into a law enforcement officer’s tactical weapon of choice or a small game hunter’s standard carry.

The Colt LE901-16S rifle weighs only 9.4 pounds and measures 37.5 inches with the stock extended. It has an effective range distance of 700 meters and a rate of fire between 700 and 950 rounds per minute when configured for .308. Exceptional accuracy comes by way of the free floated, 16-inch, chrome-lined barrel and one-piece monolithic upper receiver.

All operating controls on the LE901-16S are ambidextrous, including the magazine release, bolt catch and fire control selector. The monolithic rail covers the fore end and is suitable for mounting the shooter’s choice accessory in addition to the back up iron sight (BUIS) offered standard on the rifle. The LE901-16S features a black Vltor™ buttstock and comes with two black 20-round Magpul PMAGs.

With its simplicity of use and versatile chambering, Colt Defense’s LE901-16S is a prime weapon choice for tactical operations, big-game hunting, and small-game shots. Colt.com.

“Smokejumper” follows a group of patriots who take the meaning of “answering the call of duty” to new heights.

This modular, multi-caliber rifle is top quality and multifaceted. With a simple swap of…