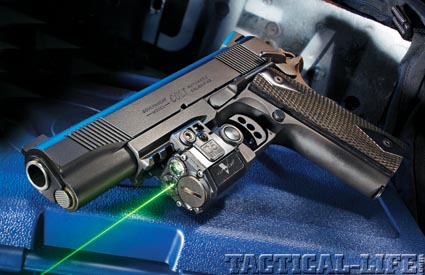 Colt’s Rail Gun, a sibling of the M45 CQBP recently chosen as the USMC sidearm, is more than ready for patrol. Shown with a Viridian C5 laser.

I admit I greeted the news with great enthusiasm. In July, Colt Defense was awarded an indefinite-delivery/indefinite-quantity contract by the U.S. Marine Corps for up to 12,000 M45 Close Quarter Battle Pistols (CQBP), including logistical support. The new CQBP is a direct descendant of the stalwart Colt M1911 adopted by the U.S. military in 1911 and carried as the primary sidearm through all of the major conflicts and wars of the 20th century. The CQBP expands on a long history of the Marines rebuilding original government-issue 1911s, primarily for use by Force Recon and MARSOC units.

Nearly three decades after the .45 was replaced by a double-action 9mm, branches of our military have lately been reconsidering that decision. Contrary to what many believe, the single-action 1911 pistol is not only safe to carry in its proper cocked-and-locked mode, but its short trigger action makes it easy to shoot well. And the time spent trying to master the double-action/single-action (DA/SA) trigger can be eliminated. I had the opportunity to talk with a young Marine who had fought in Fallujah and was armed with an issued 9mm pistol. He told me, “Everyone I knew who used the gun thumb-cocked it so they didn’t have to push through the long first trigger.” If this is how the gun is being used across the board, then it makes sense to just use a singe-action-only pistol to begin with. 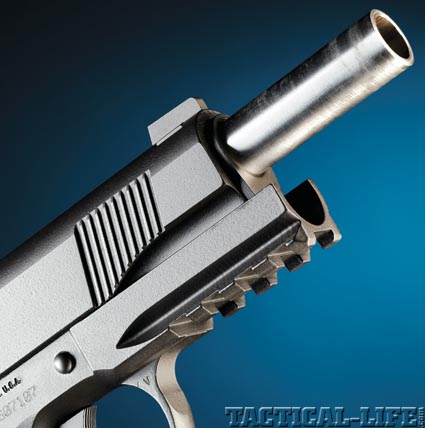 This updated 1911 features a short recoil guide rod and a classic barrel bushing like the original, but it also has forward slide serrations.

As the military seems to be moving full circle in regard to a fighting handgun, I can’t help but wonder if American law enforcement agencies will start to give the 1911 a serious look. With striker-fired pistols like the Glock and Smith & Wesson M&P being the overwhelming favorites of cops nationwide, I can’t help but think the 1911 would be a welcome addition to the cop arsenal. 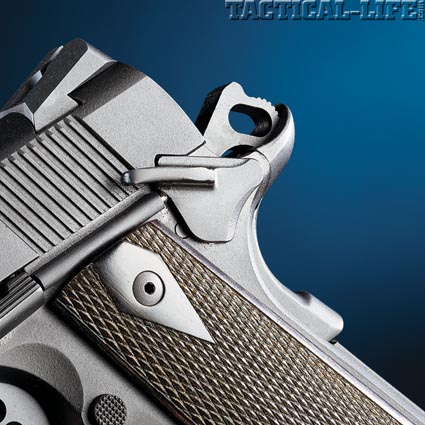 The Rail Gun features an ambidextrous safety for “cocked and locked” carry, as the 1911 design was originally intended.

I recently had the opportunity to work with what I saw as the “police version” of Colt’s new USMC pistol. With the exception of the all-black finish (the USMC version is Flat Dark Earth), the guns appear to be identical. Colt calls it the Rail Gun. This updated 1911 pistol is outfitted with new features designed for the law enforcement community.

The rail that is machined into the dust cover of the updated Colt Rail Gun offers the versatility of attaching tactical lights or laser sights, making it a tactical pistol easily adaptable to any military or law enforcement requirement. In the 21st century, any pistol not equipped with such a rail system will likely be a “non-starter” for most American LE men and women. The upswept beavertail grip safety with palm swell found on the new gun not only protects the hand from “slide bite” but also ensures users will positively depress the grip safety if a less than positive grip is obtained during a rapid draw and deployment.

To make the gun even more appealing to law enforcement agencies, the Rail Gun is equipped with a tactical-grade, ambidextrous safety lever, making it more easily adaptable to both right- and left-handed shooters. Colt opted to equip the Rail Gun with a set of Novak Low Mount Carry sights with three white dots. While I could certainly work with these sights, I would probably replace the front sight with a tritium bead and then paint the face orange or lime green to offer an even faster front sight acquisition. The hammer is a skeletonized version of the Commander style with an elongated spur and top serrations to offer the cocking thumb greater purchase. The dark wood, diamond-style grips offer a solid gripping surface, and while the frontstrap is not checkered, I did not find this to be a detriment. With the grips being checkered and the mainspring housing serrated, I found three of the four sides being textured enough to secure a solid grip.

The three-hole aluminum trigger has a serrated face that I feel helps hold my trigger finger in place. The lowered and flared ejection port helps throw empty cases well clear of the gun. The slide has a set of forward cocking serrations that I happen to like. To increase the gun’s accuracy, a National Match barrel is included, which further shows Colt’s commitment to quality. The gun also comes with two of Colt’s eight-round magazines. Add a forged-steel receiver, forged-steel slide, forged stainless steel barrel, forged-steel slide stop and a deep matte black finish and you have a gun that can go into harm’s way on the street or battlefield. 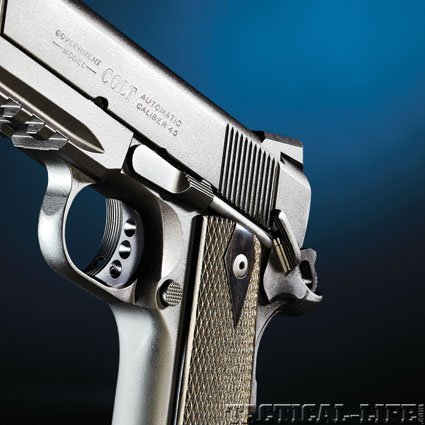 The front of the aluminum trigger is serrated to help hold a shooter’s trigger finger in place, and the slide stop is within easy reach.

While the new Colt Rail Gun certainly looks like it has “all the goods,” the only way to know for sure is to take it to the range and bust some caps. I measured the Colt’s trigger and found it broke right at 5.25 pounds, which is just about perfect. I have come to believe a trigger on a combat pistol needs to fall between 4.5 and 6 pounds if the shooter wants to maximize their ability. Trying to press the trigger on a 2-pound gun that weights in excess of 6 pounds is a difficult proposition if you want to try and keep the muzzle in alignment with the target. Many will view anything less than 4.5 pounds as a “hair trigger,” so it is best to keep the trigger weight in this range.

I tested the gun’s accuracy by shooting five 5-shot groups to see how the gun hit, with the best groups reported here. I bench-rested these groups at 25 yards on a stack of Giles Bags from The Wilderness Tactical. I also ran five rounds of each across the screens of my Shooting Chrony chronograph, with the average reported. Since the Rail Gun has a 5-inch barrel, each load achieved its maximum velocity.

While each of the selected loads proved to be more than combat accurate, the Federal HST load really stood out. At first I thought it might be a fluke, but the 230-grain HST hollow point shot 2-inch groups time after time. Considering Federal HST is one of the most street-proven loads currently available, law enforcement agencies need to take a close look at it for their .45 ACP service pistols. The HST was the direct result of inquiries from law enforcement agencies for a bullet that would expand to twice its original diameter while still holding its weight for better penetration, especially through hard objects. I had the good fortune to be at the Federal plant in Anoka, Minnesota, while the HST was being tested prior to its introduction, and it was amazing to see how well—regardless of caliber—the bullet performed through all of the FBI’s test protocols. I am not a bit surprised to see how well this load has done in actual shootings. 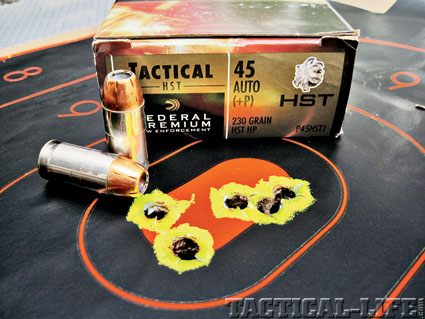 I finished my testing by performing a number of my favorite drills using a Comp-Tac Kydex paddle holster and matching magazine pouch. Comp-Tac has achieved a reputation for quality in both the combative and competition arenas due to draw speed and durability. Drills like the El Presidente, Hackathorn modified combat El Presidente, Bill Drill, “2x2x2” and other noteworthy skill drills made the afternoon go quite quickly. After 500 rounds of various ball and hollow-point loads, I did not suffer a single stoppage, which is actually quite encouraging considering how finicky many 1911 pistols can be.

Would I change anything about the Colt Rail Gun? Not much at all. With the exception of the aforementioned front sight modification, a magazine well with a little more beveling might be a good option in the future as it would speed up reloading, but regardless, the gun ran perfectly on its own with no modifications. And in the police world, that is a crucial factor.

I predict the USMC is going to like their new CQBP .45s, and if American law enforcement agencies and departments take notice, they too can take advantage of the “new” 100-year-old fighting handgun. Remember: Just because something is old does not mean it’s worn out or old technology—it just means it’s proven. For more information, visit coltsmfg.com or call 800-962-2658. 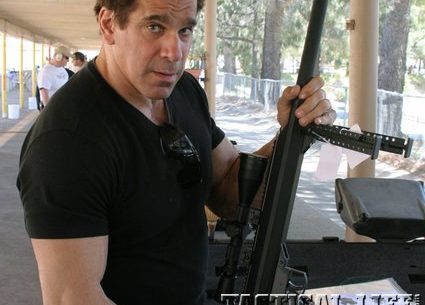 Colt’s Rail Gun, a sibling of the M45 CQBP recently chosen as the USMC…