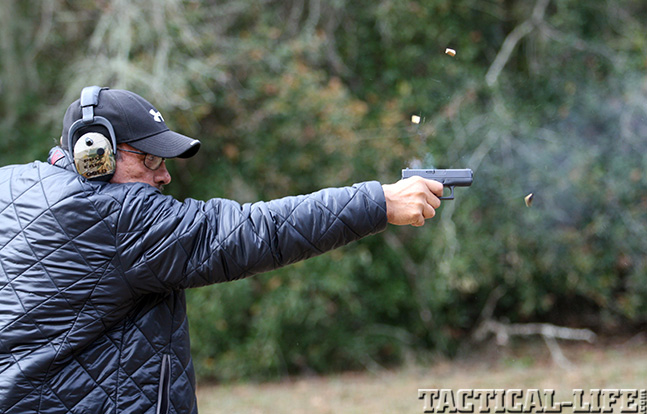 There is a long-standing philosophy in the tactical world: Two equals one, and one equals none. This concept is one I sing loudly in all of my training courses. While many will relegate this to SWAT or SRT units, my biggest focus is on patrol and plainclothes officers. The item I focus on most often is the backup gun. Backup guns have long been a staple for most officers and agencies. From the ancient days of utilizing the “New York reload” with a snubnose revolver to modern semi-auto pistols, the backup has been a welcomed friend to anyone professionally carrying a gun. Some of the most storied gunfighters in the world carried two guns. The law enforcement world is full of stories of how a backup gun saved a life or saved a very bad day. These are the stories I use to convince officers that it is always a good idea to carry some extra help.

My personal research during the many backup gun qualification courses I’ve run has proven that the majority of officers suffer in the accuracy department. The main culprit is time on the gun. In many cases, officers are issued a semi-auto, striker-fired pistol as their primary and a snubnose .38 revolver as their backup. While not always the case, it is indeed a very common sight. In short, the backup gun is sufficiently different enough from their primary that it affects their familiarity with the backup, which in turn diminishes performance in terms of accuracy. Different triggers, sights and operating procedures can limit even the best shooter. With the ongoing trend in limiting range time due to budget constraints, officers are spending little if any time training on their backup weapon. This can have lethal consequences.

Enter the Glock 42. Glock’s newest addition is a major departure from its “baby Glocks,” such as the Glock 27. The G42 is truly a compact pistol with concealment as its calling card. Chambered in .380 ACP and holding a six-round, single-stack magazine, the G42 is slender to say the least. While some met the announcement of the gun’s release with skepticism, after getting some quality range time with the G42, I immediately saw it as an answer to a long-standing problem—size. This new Glock is extremely manageable, reliable and accurate.

While its detractors rallied around the fact that it fires a .380 round, those who look at weapons through the prism of application see more. The cliché is that the .380 is simply a 9mm set on stun. In my opinion, people are blurring the lines of what the pistol is designed for. My longtime motto has always been “better a small gun than no gun.”

“Chambered in .380 ACP and holding a six-round, single-stack magazine, the G42 is slender to say the least.”

The single most profound strength that the G42 brings to the table is familiarity. For all intents and purposes, Glock has made a miniature version of the most widely issued law enforcement sidearm in the world, the Glock 22. Function and manipulation of the G42 is the same as most officers’ standard pistol. More importantly, the trigger of the Glock 42 has the same feel and function as its big brother. Everyone familiar with the compact pistol market is aware that its greatest challenge has been the trigger. Heavy triggers with excessively long resets have made them questionable as an effective backup. But that’s not the case with the Glock 42. With a trigger weight of approximately 5 pounds and a standard Glock reset, it is simply one of the best on the market. It has the same feel as triggers in full-sized Glocks, which helps shooters deliver very accurate shots.

Another noticeable advantage that the G42 has over some of its pocket pistol relatives is its lack of “snap.” While tough to quantify, the G42 is very easy to shoot and does not have the trademark snap experienced with so many other micro blasters. An interesting point to make is that the G42 is not listed as a Gen4 pistol, and it does not come with interchangeable backstraps. The back of the grip does, however, run all the way down to the back of the magazine well, which protects the mag and allows it to fall free. Most people will overlook the importance of this feature, but it is a critical component to a fighting gun. It has texturing similar to the Gen4 guns, but not quite as aggressive. Glock has obviously listened to its law enforcement patrons and added general improvements into the gun. This is not Glock’s first rodeo with the .380 round. The fabled but rarely-seen-in-America Glock 28 has been in the Austrian stable for years. Honestly, I believe the G42 will serve the U.S. law enforcement community better than its bulkier European cousin.

The G42 has not gone unnoticed by others in the law enforcement community. In fact, Glock has been a staple of small backup guns for some time. The Glock 27 has been a go-to gun for many officers, but it is not the most comfortable gun you will ever carry because of its size and weight. The G27 is essentially a “chop shop” version of the G22 with a shorter barrel and grip. For many, it is difficult to conceal.

According to Glock, the Marietta, Georgia, Police Department will be officially issuing the G42 as a backup/off-duty weapon. While the Marietta Police Department had the foresight to issue G27s previously, they quickly appreciated what the G42 had to offer. Their confidence in the pistol was high enough for them to trade in their G27s for 100 new G42s. In an official statement, the Marietta Chief of Police Dan Flynn said, “The Marietta Police Department has carried Glocks for a long time, and we’re proud to be the first department to adopt the G42. These new pistols work the same way as the officers’ primary weapon, the Glock 22, so the training will be a natural transition when our officers begin qualifying with them tomorrow.”

“… the G42 will be one of the lightest safety blankets an officer can have.”

Glock is very pleased to have such a warm welcome for their newest addition. “We’ve seen a lot of hype around this new pistol in the law enforcement community,” said Chad Mathis, vice president of Glock, Inc. “Our hope is that once the Marietta Police Department starts training their officers on the range they will spread the word on just how shootable and reliable the G42 proves to be.”

at the G42 weighs in at a solid 12.7 ounces less than its’ G27 counterpart. The tape tells us that the G42 is half an inch shorter and less than an inch thick. That, combined with Glock’s standard finish, makes this a solid addition to an officer’s gear. In a perfect world, the size of the new G42 wouldn’t really matter. Everyone would dutifully carry their backup guns every day—no complaints, no hesitation, just commitment to being prepared. That simply is not the case, however. Size does matter, and the lighter the gun, the more readily an officer will carry it. Many a locker is shut each shift with a backup pistol left behind. Carried in a well-made ankle holster or deep-concealment holster, the G42 will be one of the lightest safety blankets an officer can have.

As with the release of any new gun, the aftermarket world jumps at the opportunity to offer add-ons and improvements. While there is not much on my “to do” list for the G42, there are a couple things worth suggesting to officers. First is the addition of night sights. Any real-world fighting pistol must have quality night sights. There are already a couple versions of these sights on the market, and I would expect to see more. The second order of business is to get the gun to your armorer for a polishing of the internals. Understand that this is in no way designed to lighten the trigger. It is simply a process where a professional de-burrs and smoothes all of the internal metal components associated with the trigger. The byproduct of manufacturing is small metal burrs and rough spots. Even in a quality builder like Glock, it happens. Gone untouched, the parts would eventually smooth themselves out as they rub against each other. This is what most people call the “break in” period. The trigger may feel gritty and not quite as smooth as a well-worn pistol. With that being said, any weapon that hits the street to protect an officer must be in the best condition possible. When bad things happen, it will not be the time to start breaking in a new trigger.

The G42 has quickly turned into the gun that everybody is trying to get. But it didn’t start out that way. The ramp up to a large industry trade show in 2014 was almost a painful experience, as every “expert” in social media declared the G42 a boondoggle and demanded the head of whomever thought of such a thing. The deafening silence that followed the show was a sign that maybe some had judged too soon. A quick check of the gun shops around me saw the G42 priced about 20 percent above the suggested retail price. That is based purely on demand. In time, supplies will catch up with demand, but for right now, it is a hot ticket. Yes, my wish list includes seeing Glock making a single-stack 9mm pistol—it would do extremely well in the current market. Until that day, I will express my pleasure with the Glock 42 and recommend it to students and friends in the law enforcement community. It has made its way into my ankle holster, and I be believe others will follow suit. 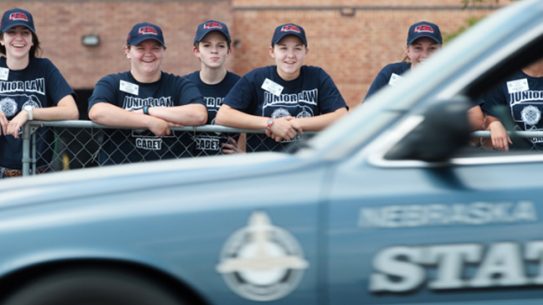 Young men and women interested in law enforcement from around Nebraska get a taste...