There are a lot of outstanding sniper/counter-sniper training schools out there, and there are a lot of outstanding sniper rifles that can be equipped for training or for the street. I recently had the opportunity to utilize just such a rifle, in just such a school. I took OSS-I’s three-day Counter Sniper Operations course and fired a custom .30-06 semi-auto Valkyr rifle made by Mark Lammers at LOSOK Custom Arms in Delaware, Ohio. Both school and rifle are tops in their respective areas.

Lead instructor for OSS-I’s course (and its co-owner) is Chad Williams. Chad is a sergeant major in the Army Special Forces and a Columbus, Ohio police officer and trainer, who is well versed in military sniper operations. Assisting him with the class was Mark Johnson, another Columbus police officer and military sniper. Both men have felt the heat of GWOT combat in Iraq and Afghanistan. 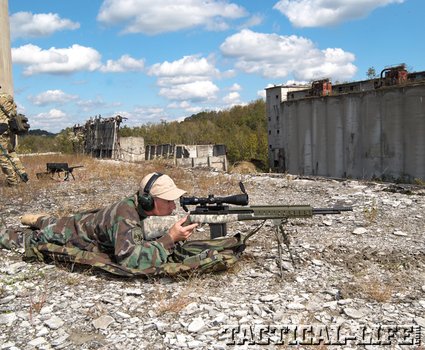 The author shown perched on a decaying rooftop and engaging a steel target at 465 yards. Once windage and elevation were determined, shots were hitting below the neck, between the spine and heart.

The main thing that separates the Counter Sniper Operations course from all the others is this: location, location, location. The class is held in an abandoned concrete factory just outside of Zanesville, Ohio. This site is almost impossible to duplicate anywhere and consists of poured-concrete-wall buildings across broken terrain, with a large pond on one border and massive hillsides and a river on the other. Step onto this site and it is like finding yourself in Stalingrad during World War II, just without the cold, brutality and starvation. The buildings look war-torn and the walls are pockmarked with bullet strikes and divots and Simunition markings.