by Mike Beliveau
in Guns, Handguns
0

Self-defense experts say that the purpose of a handgun is to allow you to fight your way to a long gun. Those are wise words. Almost anyone can shoot a long gun better than they can shoot a handgun, especially in the high stress environment of a gunfight or a late night home invasion. But not every long gun is a good choice for a fight in the close confines of your house. Your scope-mounted .308 deer rifle has obvious disadvantages in that role. Shotguns are effective, but many sporting shotguns are too long and hold too few rounds to be solid defensive choices.

What has proven to be effective in those situations are short rifles chambered in pistol-caliber rounds with a high magazine capacity. Here in America, since 1866, that role has usually been filled by lever-action carbines. Though the term Personal Defense Weapon may have been coined in World War II to describe the M1 Carbine, there’s no doubt that generations of shooters equipped with Winchester 1873 and 1892 carbines were thoroughly familiar with the concept.

Here in the twenty-first century, lever actions are still surprisingly viable as personal defense weapons for either home or vehicle use, but today we have more modern choices as well. I have two of these carbines, one for the house and another for the truck. Either one could handle both roles, but I like having each gun where it belongs rather than schlepping a gun from house to truck throughout the day. 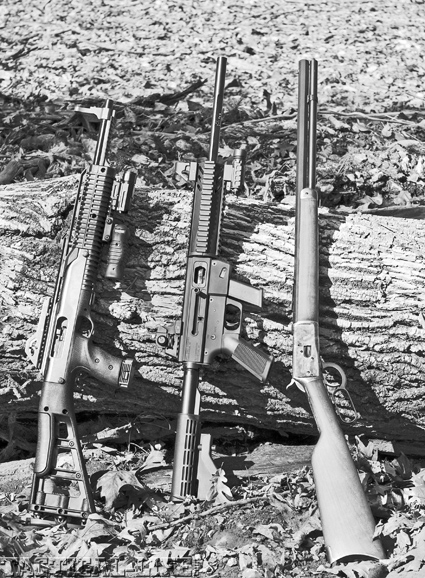 For most of the 20th century, guns like the 1892 Winchester (right) filled the role of high-capacity, pistol-caliber personal defense weapons, but now twenty-first century carbines like the Hi-Point 4595 (right) and the JR Carbine (center) are more versatile platforms. 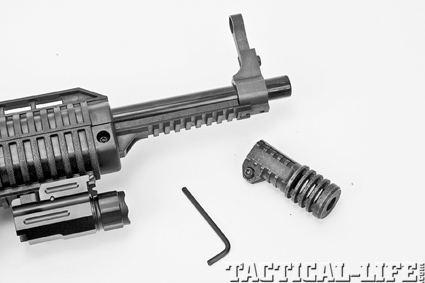 The Hi-Point’s compensator bolts on with a single Allen screw.

Hi-Point Carbine
My house gun is Hi-Point’s semi-automatic carbine in .45 ACP. Hi-Point’s design has been around since the late 1990s when they debuted their model 995 carbine chambered for the 9mm Luger round. Despite its quirky appearance, the 995 sold like gangbusters because it filled a real need, and it did so at an excellent price point. Today’s Hi-Points look better than their predecessors, and they maintain an affordable price. They have been available in 9mm and .40 S&W chambering for some time, but the 4595 model, chambered in .45 ACP, is new on the market.

Over the last year Hi-Point changed their stock design to the TS configuration. To my eye this is a definite step up from their original stock design. The new buttstock is skeletonized with a spring-loaded recoil pad. It has very minimal drop and handles recoil well—not that .45 ACP recoil in a carbine is all that intense.

Like all Hi-Point carbines, the 4595 is based on the company’s pistol action. Unlike other pistols chambered in full power fighting cartridges, Hi-Point pistols use a blowback action rather than a locked breech, recoil action. In the carbine, the breechblock is a massive chunk of zinc alloy in a black, sheet metal receiver. The bolt’s charging handle screws into a hole on the left side of the bolt. The bolt can be locked open by pushing the bolt handle knob into a circular cut out at the back of the charging slot. The safety lever is also on the left side of the receiver and, in my opinion, is a tad too small for a self-defense carbine. I felt that it would be difficult to hit with your thumb from a normal firing grip.

Hi-Point carbines load through the pistol grip using the company’s proprietary 10-round magazines.

The standard sights consist of an adjustable aperture rear sight and a hooded post front sight that is adjustable for elevation. The sights are rugged and easy to see. Magazines on the Hi-Point load through the grip like a handgun. The magazines are based on their pistol mags, and they are unique to Hi-Point. They work fine, but capacity is an issue at merely nine rounds.

The forend is molded with a series of vertical slots to provide a non-slip grip. It is a little bulky, but still comfortable to hold. There are Picatinny rails in three areas of the carbine—on top of the receiver, allowing you to swap out the iron sights for optics, and there are rails under the forearm and under the exposed run of the barrel itself.

Hi-Point offers the 4595 from the factory in a variety of configurations that includes various optical sights, lasers, lights and the like. A lot of those gadgets don’t fit my intended purpose for this carbine, but I did add three accessories that really enhance the carbine for me. The first, and most important is a light. The Hi-Point is my gun for things that go bump in the night. A light is worth its weight in gold in a situation like that. The second accessory is a fold-ing vertical handgrip. The final accessory I added to the 4595 was a compensator. 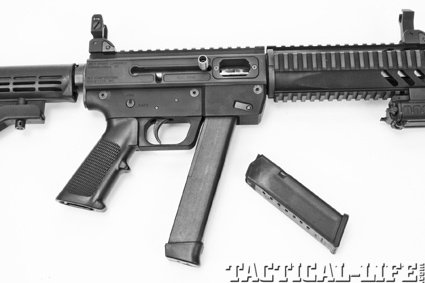 One of the best features of the JR Carbine is that it accepts Glock magazines. The carbine comes with a single 10-round magazine, but also accepts 33-round Glock mags. With three of these ultra-high capacity magazines, you are ready for a real firefight.

JR Carbine
For my truck gun I went in a different direction, selecting a JR Carbine from E.M.F. Inc. Like the Hi-Point, this is another American-made, pistol-caliber, blowback-operated firearm. But the similarities end there. If you are used to handling an AR-15 rifle, the JR Carbine will feel right at home in your hands.

The JR has an M4-style telescoping buttstock. The pistol grip and controls feel exactly like an M4 carbine. Everything is very ergonomic, and the safety is easy to hit from the firing position. The receiver is made from aerospace-grade 6061 aluminum. The trigger group is a standard AR trigger assembly, and the JR will accept AR-15 aftermarket triggers and parts. The JR can be easily converted from right-side ejection to left-side ejection with just a screwdriver, making it user-friendly to southpaws.

The top of the JR’s frame is a Picatinny rail, and the aluminum handguard is a quad-rail design. The carbine ships without sights, but any AR-15-compatible rail-mounted sights will work with it. I mounted a set of Diamondback premium combat sights, which use diamond-shaped apertures rather than the tradi-tional circles. They allow you to center the front post in the aperture more quickly and precisely than circular aper-ture sights. I also mounted a light on the rail under the handguard.

JR Carbines are chambered in 9mm, .40 S&W and in .45 ACP. I selected the 9mm for my truck gun. Despite my preference for .45 ACP, a couple of years ago I decided that my grab and go guns would be chambered in 9mm. As a cartridge it is an adequate man stopper. Ammunition is light, so I can carry more of it. But more to the point, ammo is available anywhere—from civilian, military and law enforcement sources. In a disaster situation…think Katrina…9mm is what I want to be shooting. To that end my truck is always stocked with a 9mm handgun and 100 rounds of +P hollow point ammunition, along with a first aid kit and MREs in a metal box under the seat. Now the JR Carbine in 9mm resides there as well. 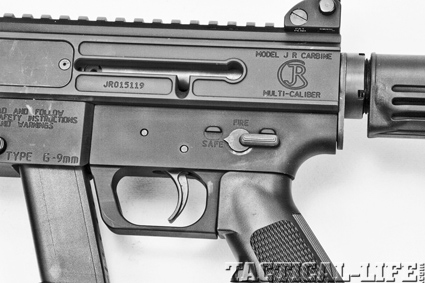 The JR Carbine in 9mm uses readily available Glock pistol magazines. This was a smart choice by the folks who designed the JR Carbine. While they ship the gun with one, 10-round Glock mag, the first thing I did was log on to cheaperthandirt.com and order a couple of Glock 33-round magazines—providing an awesome level of firepower.

Range Time
At the range, both of these carbines proved that they can shoot. I used a variety of factory loads with full patch and hollowpoint bullets, as well as my full metal jacket handloads in each carbine. With the Hi-Point 4595, I began by putting 100 rounds of good old Winchester 230-grain full metal jacket ammo through it to be sure everything was functioning properly. The Winchester full patch bullets averaged 937 feet per second (fps) in velocity from the 17-inch barrel on the Hi-Point. At 50 yards off-hand the 100-shot group was just over five inches across.

The trigger on my Hi-Point was a bit stout at seven pounds. While no one would consider that a target grade trigger, it is an acceptable fighting trigger pull. It breaks very cleanly, and regardless of what the trigger scale says, the trigger feels lighter when you’re actually firing it.

After the Winchester White box ammo, I fed the Hi-Point some American Eagle 230-grain full metal jacketed rounds. These had slightly less velocity than the Winchester shells. The average velocity was just 865 fps. Accuracy was quite good though. I kept everything in a three-inch circle at 50 yards.

I finished off that range session with a box of Remington Golden Saber, 185-grain jacketed hollow points. Velocity with the lighter slugs jumped up to 1,181 fps. Group size at 50 yards was back up to five inches. Later I returned to the range and put a couple of hundred of my handloads through the Hi-Point. Unless you have a personal fortune, handloading is the only affordable way to shoot enough ammunition to become proficient with any firearm. My .45 ACP load consists of a 230-grain FMJ bullet over 6.3 grains of Unique and lit off by a Federal large pistol primer. This is close to a maximum load and it was cracking out of the Hi-Point at 993 fps. The group diameter was five inches, which is commensurate with the factory ammo tested.

The JR Carbine was a joy to shoot. I started off with Remington 115-grain full metal jacketed bullets. These rounds burned down range at 1,223 feet per second from the JR Carbine’s 16.25-inch barrel. Accuracy was a bit better than the Hi-Point with groups averaging three inches in diameter from 50 yards. The accuracy is probably due in no small measure to two factors. First the JR’s trigger is much lighter, breaking at 3.75 pounds. Second, the Diamondback AR-15 sights are very easy to use effectively.

I also ran a box of Winchester’s 124- grain NATO full metal jacket ammunition through the JR. I was surprised to see velocity take a pretty good jump with the heavier Winchester bullets. Those slugs were traveling at 1,339 fps. And like the slower Remington rounds, they also landed in three-inch groups.

Next I switched to Remington 115-grain, +P, jacketed hollow point ammu-nition. With that loading velocity jumped up to 1,394 fps, and accuracy remained the same with the carbine consistently delivering three-inch groups at 50 yards. Since then I’ve been practicing with my handloads. I load 9mm Luger cases with a 115-grain full metal jacket bullet over 5.1 grains of HP-38 powder. This is a maximum load, and it travelled down range at 1,232 fps out of the JR Carbine. Accuracy is similar to factory loads, but with a whole lot less of a cash outlay.

Using contemporary carbines with modern upgrades, it’s easy to develop an effective personal defense battery. With one for the house and one for the truck, there is peace of mind no matter where you are.