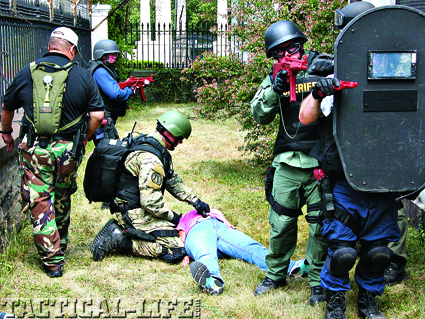 During the 1997 North Hollywood shootout involving the Los Angeles Police Department, 13 Officers were injured. Due to the chaos, many went long periods of time without medical attention. Officer Martin Whitfield was one of those officers. After being shot by the suspects, Whitfield took cover behind a tree and bled for nearly half an hour before being rescued. This scene was captured on video and is a gut-wrenching part of the documentary 44 Minutes—the North Hollywood Shootout.

Part of the reason for the delayed response, according to reports at the time, was that “standard EMS procedures precluded responders from entering a ‘hot area’.”

Law enforcement gets paid to work in “hot areas” and with the terrorism threats, tactics and training to rescue injured personnel must become inherent in the playbook. Getting to and treating injured officers in “combat situations” should be a priority that all departments address. But the question is…How?

The CONTOMS (Counter Narcotics & Terrorism Operational Medical Support) Program seeks to address this tactical reality. The requirement for getting to, and treating, injured personnel under combat circumstances is the reason the training was developed.

Saving the Lives of Lifesavers
According to Lt. Phil Beck, USPP (United States Park Police) S.W.A.T. commander, this program has functioned and been successful for more than 20 years while graduating more than 100 classes. In 1989, the USPP and the Casualty Care Research Center (CCRC) recognized that “Law enforcement and the military needed tactical medical support of special operations to enhance mission success. Most EMS (emergency medical services) systems in the United States and abroad can handle individual patients in controlled situations but in some locales, local emergency medical technicians have been pressed into service to support counter terrorism, drug interdiction and other law enforcement activities without any additional training. These activities are specialized in nature; characterized by prolonged operations, organized opposing forces, use of military-type weapons, and increasing death and injury among law enforcement officers, perpetrators and innocent citizens.”

Law enforcement is a dangerous occupation. According to statistics cited on the CONTOMS website (www.trueresearch.org/contoms), during the past 10 years, on average, one law enforcement officer dies every 53.5 hours, or 164 per year. On average, more than 57,000 LE officers are assaulted each year, resulting in some 17,000 injuries.

Initially, the USPP partnered with the CCRC (Casualty Care Research Center), an element of the Department of Defense, Uniformed Services University to research and create this program.

In 1989, a training class was given to the NYPD ESU. U.S. Park Police officers instructed the class, which initially was slated for 45 officers, but quickly became 450 officers. To date, the NYPD ESU still base their tactical medical support on CONTOMS.

In 1990, the program was formalized as CONTOMS and the first class given. Over the years, domestic and foreign military and law enforcement organizations have used this training as their baseline for tactical medical care. CONTOMS is widely regarded as the gold standard for S.W.A.T. medical training.

The mission of CONTOMS is to provide training and tactics that can “protect the protectors” which will “ultimately prevent more names from being added to the National Law Enforcement Memorial.” The program offers a nationally standardized curriculum and certification process for EMTs, paramedics, and physicians who operate as part of a special response team. The program also tracks data and consults with federal, state and local agencies to solve problems via a medical needs assessment. 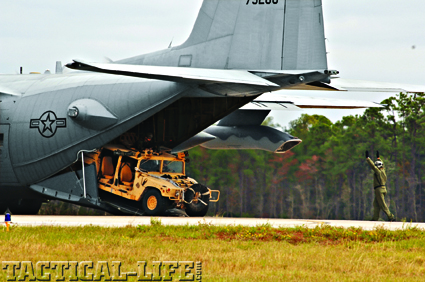