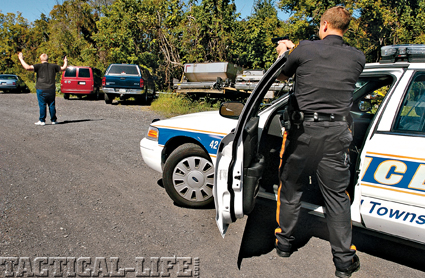 The officer established distance from a suspect and is in a position to control all of his actions.

In 1979, the New York City Police Department conducted a study of police shootings — from which NYPD SOP 9: Analysis of Police Combat was created, highlighting relevant and lifesaving information. “From Sept 1854 to Dec 1979, 254 NYPD officers died from wounds received in armed encounters.” The shooting distance in 90% of those cases was less than 15 feet (contact to 3 feet: 34%, 3 feet to 6 feet: 47%, 6 feet to 15 feet: 9%).

Not much has changed today. The majority of law enforcement-involved shootings still occur within close distances. The reality is, “up close and personal” is where law enforcement conducts 90% of its work. In the world of cops, engaging a suspect or a threat at 50, 100 or 200 yards is uncommon. Therefore, the tools and tactics cops use must be consistent with the CQB world they “fight in.”

21-Foot Rule
The “21-Foot Rule,” created by Dennis Tueller has become a core philosophy in police training. This “rule” states that in the time it takes the average officer to recognize a threat, draw his gun and fire two rounds at center mass, an average subject charging at the officer with a knife can cover a distance of 21 feet. This has become a standard theory taught by most law enforcement academies. Unfortunately, with the increase in different weapon systems, Mixed Martial Arts styles of fighting, more people hitting the gym and more people to deal with during a police contact, 21 feet is probably not enough. 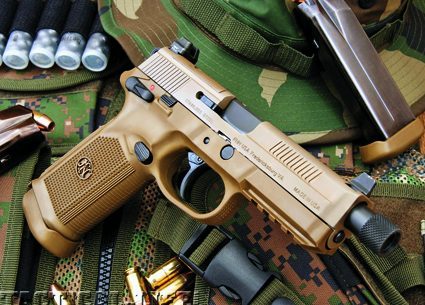