WASHINGTON– Senior defense officials are getting a glimpse this week of the latest in unmanned systems technologies, which many concede is the way of the future for the U.S. military.

More than 5,000 people from 30 countries took part in the world’s largest exhibition of robots and unmanned systems capabilities at the Association for Unmanned Vehicle Systems International’s Unmanned Systems North America 2009 Convention, which began Aug. 9 and ends tomorrow at the Washington Convention Center here. More than 320 unmanned aerial, maritime and ground systems were on display, offering the industries’ latest products and innovations.

“That’s the direction we’re heading,” Hansen said. “It’s not a love affair with the platform of being unmanned. It’s the capability it represents.”

Hansen said he’s staggered by the advancements and rapid developments of such systems. He added that he shares Defense Secretary Robert M. Gates’ enthusiasm and desire for more unmanned capabilities, citing the need to embrace today’s technology to be a successful military.

Information- and technology-based warfare “is not going to be just a component of irregular warfare,” Hansen said. “This is going to be a component of all of the kinds of engagements and operations we’ll have in the future,” he explained.

Aerial surveillance and intelligence-gathering capabilities from unmanned aerial systems — such as the Predator, Shadow and Reaper — give the military more options with their troops. Rather than risking the lives of pilots flying multi-million-dollar reconnaissance planes, operators control and monitor the unmanned aircraft and their data remotely from safe locations. Operators in the United States, in some cases, can monitor missions in Iraq and Afghanistan without having to go to the combat theater, Hansen explained. Unmanned systems can project power in combat without projecting vulnerabilities, he added.

The Defense Department has nearly 2,000 “small” unmanned aerial syatems deployed to Iraq and Afghanistan, defense officials reported. Most of those are Ravens, which the Air Force uses to support Army and Marine Corps ground forces.

In April, Gates cited unmanned aerial systems as an increasing part of the Air Force arsenal, as he recommended that Congress halt production of the F-22 Raptor fighter jet and devote more funding to unmanned systems. The secretary compared the F-16 Fighting Falcon and the Reaper unmanned system, noting that the Reaper has a range of about 3,000 miles and can carry 1.5 tons of weapons – all unmanned and remotely – while the manned F-16 fighter has a range of about 500 miles.

This fiscal year, the Air Force has spent more money on unmanned aerial systems and trained more operators than fighter jets and fighter pilots, Hansen said. Demand for unmanned systems by the U.S. military has increased more than 660 percent since 2004, he added.

The ability to sneak in and operate for long periods of time without risking aviators is incredible, the general said. He referenced a recent mission in which a Global Hawk unmanned system flew for 33 straight hours conducting reconnaissance operations for ground commanders in Iraq and Afghanistan.

Unmanned aerial systems, he added, can take off from the Middle East, go to Iraq and Afghanistan, and conduct missions for both theaters, the general said. “That’s phenomenal,” he added.

Hansen said that although unmanned systems give the military the ability to decrease its footprint in direct combat, they still require manpower. He explained that operators fly the systems, while analysts in separate locations across the globe are recording intelligence from imagery and audio in real time.

“We don’t need to have all of our capabilities forward,” he said. “This is a very, very compelling capability. As we look to the future, we’ve got to keep our focus on capabilities, and keep in mind that it’s critically important to have systems working together.

“[Unmanned aerial systems] will cause missions to be effective and lives to be saved,” he added. “We believe strongly that as we build out these capabilities, it’s not just about improvements. It’s truly about an integration to perfect and get the job done and support the mission.” 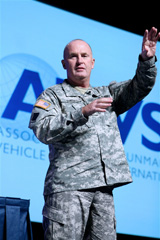