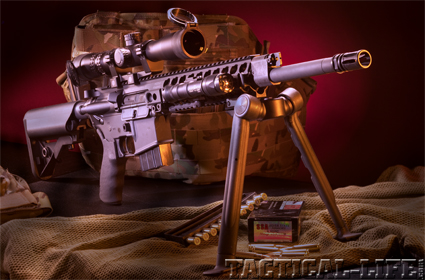 Rifle manufacturer Lewis Machine & Tool Company (LMT) has been on a tear. Their 7.62mm Modular Weapon System LM308MWS was adopted by the British Army as the L129A1. The Chicago Police department, one of the oldest modern police departments in the world, has approved the use of the LMT CQB for patrol duty. And even TV’s Brian “Pig Man” Quaca, hog hunter supreme, has signed on to use LMT rifles on his relentless mission of pig eradication. How do you top that? By giving owners of your MRP weapons the ability to upgrade their rifles to one of the hottest AR calibers in gas-piston trim.

The 6.8mm Special Purpose Cartridge (SPC) was created by Remington Arms with input from U.S. SOCOM to increase the power of the issue AR-based family of rifles, without scaling up to a new gun for the .308/7.62mm round. With the same overall length as a 5.56x45mm round but propelling a 115-grain bullet at 2,500 fps, the 6.8 SPC should have been an instant hit, but it has taken nearly a decade to win over the AR community.

One reason the 6.8 SPC was a slow starter was because there were literally millions of rifles already chambered for .223 and 5.56mm NATO. Many gunowners did not want to go through the hassle of re-barreling their rifle and getting new magazines and bolt carrier groups to work with the SPC’s .30 Remington case head. But owners of the LMT series of MRP rifles have no such qualms: the Defender Monolithic Rail Platform (MRP) pioneered by LMT allows easy swapping of barrels by loosening the two star-head bolts.

The CQB MRP was created in response to the growing demand for quick-change barrel systems. Karl Lewis, president of LMT, designed the MRP as a true user-interchangeable barrel system based on a lightweight upper receiver machined from a single piece of aluminum. With the MRP, all play between the forend and the receiver is eliminated, creating a solid, unitized base for optics and night-vision systems and supplying a feel that standard M4s cannot match. LMT replacement barrels with either full-length direct-gas tubes or short-stroke pistons can be interchanged as long as the appropriate bolt carrier group is used. Now, civilian, military and police MRP owners can opt to power up with 6.8 barrels in either gas system. 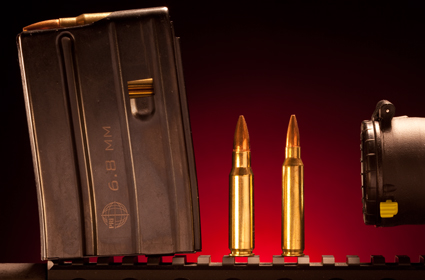 Although they are the same overall length, the 6.8 SPC and 5.56mm NATO rounds require two different magazines

The standard CQB MRP Defender rifle comes equipped with the rubber Ergo grip and the SOPMOD buttstock (arguably the most comfortable telescoping stock on an AR-style rifle), the one-piece upper receiver with Picattiny rails machined as an integral part of the upper at the 3-, 6-, 9- and 12-o’clock positions. With rails running on each of the four sides, the CQB MRP rifle offers plenty of places for accessories such as optics and lights, allowing them to mount night vision and power extenders on the same plane as their day optics. And with 5.56mm and .204 Ruger conversion kits, the operator can have true multi-barrel/multi-caliber capabilities.

After securing a DI 6.8 MRP and a conversion kit, a call was made to Silver State Armory (SSA), one of the top suppliers of SPC ammunition. The first question they asked was whether the LMT had a regular or a Spec II chamber. The Spec II chamber was designed for hotter tactical loads and near-maximum-pressure ammo. While some have embraced this high-pressure chamber, LMT and other AR manufacturers like Ruger have chosen to chamber their 6.8 SPC rifles to the original SAAMI specifications for the cartridge. This means that the LMT 6.8mm barrels should not be fired with any loads advertised as tactical or high-pressure, which may create dangerous pressure levels! The SAAMI chamber-safe SSA loads include the rounds they supplied for testing: their 115-grain OTM boat-tail hollow points running 2,500 fps with 1,590 foot-pounds of muzzle energy. 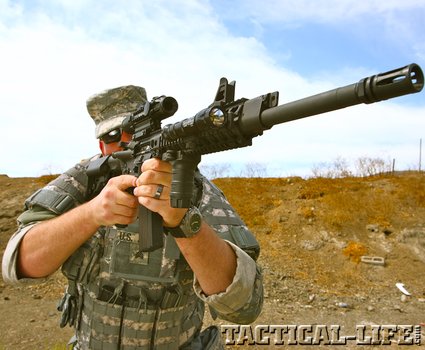 During tests in Simi, former Ranger Abell takes aim with a 5.56mm MRP topped with a Leupold Mark VI riflescope.

We took the 6.8 SPC, a 5.56mm chambered LMT CQB MRP Defender carbine-length rifle and a new 6.8 SPC GP Conversion Kit to a private training facility in Simi Valley, California, to see what a retired police officer, an ex–Army Ranger, a former Marine and some modern-rifle newbies would think of the two gas systems, when taken head to head.

The first thing we did was install the conversion kit on the 5.56mm MRP. We made sure the weapon was clear and then removed the bolt carrier group and charging handle from the upper receiver. Two torx-head bolts are visible ahead of the magazine well on the right side of the rifle. Using LMT’s supplied T-30 torx wrench, we removed the front bolt entirely and then loosened the bolt closest to the ejection port the proscribed three complete 360-degree turns. Grabbing the muzzle end, we pulled the barrel free of the rifle’s upper receiver.

Installing the 16-inch chrome-lined 6.8 SPC gas-piston barrel into the upper receiver was a snap: we slid the barrel into the forend, lined up the end of the piston and full seated the barrel. The front bolt was then returned to its place and tightened with the pre-set torque wrench (which, by the way, would not always retain the torx-head bit—a problem LMT is working on). Then we tightened the rear bolt. The gas-piston bolt carrier group was installed in the upper receiver, and the 5.56mm magazine was replaced with the 6.8. Total time for the changeover: around 5 minutes.

Now we could fire the LMT 6.8 SPC gas piston against the DI MRP. Over the course of the day, we topped each rifle with various combat optics, including Leupold’s excellent Mark 4 1-3X CQ/T for kill-house drills and Nightforce Optics’ 2.5-10×32 NXS compact with a built-in 20-MOA slope (mounted in their new Unimount one-piece ring/mount) to increase long-range shooting. Both the Leupold close-quarters and Nightforce sniper scopes were fast and bright, helping each shooter quickly run through my ammunition! After sighting in the Compact NXS, the SSA 6.8 loads printed MOA groups at 328 feet and made consistent hits on LaRue self-resetting torso-sized silhouettes set out to 1,312 feet. 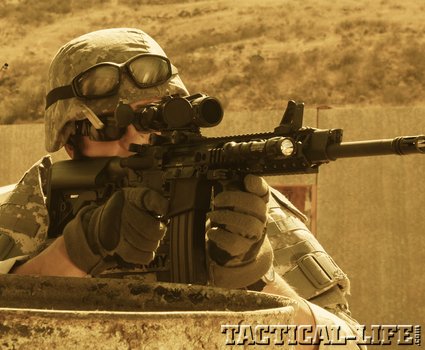 Enough bench work! The ex-military shooters and a few civilians kitted up in tactical gear. They ran the 6.8 LMT CQB MRPs through a mock-Iraqi training village. The LMTs were nimble: they came up fast and the SOPMOD stock got raves from every shooter. After every man got 300 rounds out of each gun without a hitch, the consensus was split between the DI and gas-piston guns.

Shooters new to the AR system preferred the gas-piston gun. While the 6.8s gave more recoil impulse than standard 5.56mm guns, the shooters estimated that the gas-piston conversion-equipped rifle kicked 10 to 15 percent less than the DI gun, using the same 2,500 fps SSA 115-grain ammo. After the day’s session, one of the competitive shooters who shot both MRP guns told me to immediately “the piston gun’s for me.” It was just as accurate as the DI rifle and ran cooler and cleaner.

LMT was founded in 1980 to provide the U.S. military, law enforcement and government agencies with high-quality weapons, component, and modular weapon systems. LMT continues to serve them and has expanded to include foreign military services as well as commercial customers. LMT produces a full line of complete weapon systems, grenade launchers, as well as accessories and components for the commercial market, complementing any M16- or AR-15-type weapon.

LMT really did its homework on the 6.8 SPC gas-piston conversions for their CQB MRP. So, should the AR hunter, operator or military unit already issuing the LMT abandon their 5.56mm barrels and upgrade to the 6.8mm round? In my book, extended range, real knockdown power and a cleaner-shooting, more reliable gas-piston gun trump tradition—go for it. For more information, visit lmtdefense.com or call 309-732-9527. 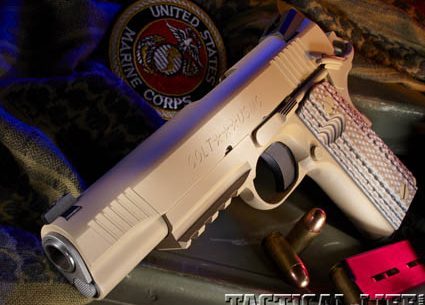