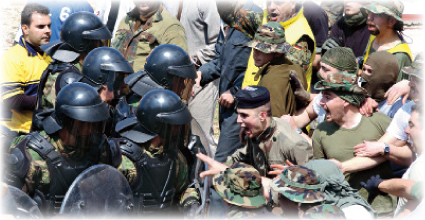 Oakland, California  March 21, 2009: Four Oakland police officers lost their lives. It seems that a violent career criminal by the name of Lovelle Mixon, 27, was not going to be arrested and he’d do anything to prevent his arrest. This included killing any cops who might arrest him.

Mixon’s cop killing spree began at about 1:15 p.m. when motorcycle officers Sergeant Mark Dunakin and Officer John Hege stopped Mixon in his car for an apparent “routine” traffic stop. Mixon knew that he was a wanted felon on a “no bail” parole violation warrant. Unfortunately, the officers didn’t know that. As the officers were checking out Mixon’s driver’s license, he bolted from his vehicle and shot both officers.

In order to make sure that the officers were dead, Mixon stood over the wounded officers and shot them again. He got his wish. Both officers died as direct result of their wounds. Sergeant Dunakin died immediately and Officer Hege expired the next day. The two officers never drew their weapons. Immediately after shooting the officers, Mixon ran around the corner to his sister’s house.

Oakland PD received an anonymous tip that Mixon was holed up in his sister’s apartment and barricaded himself in a closet. At 3:30 p.m. Oakland SWAT was mobilized. The SWAT team went to his sister’s, Enjoli Mixon, apartment. As SWAT entered the apartment, Mixon rapidly fired through a closet wall, killing Sergeant Ervin Roman and Sergeant Daniel Sakai, and wounding Sergeant Pat Gonzalez. Mixon also died in the gun battle.

Mixon’s sister described her brother as nice, kind and sweet. You could almost understand the opinion of a sister… almost. About 50 members of the community organized a march through the Oakland neighborhood. The organizers called Lovelle Mixon a “freedom fighter” and extolled his virtues. Why didn’t other community members condemn this group?

Modesto, California  April 1, 2009: A Modesto K-9 officer and his dog were assaulted and slightly injured after being told by a mob, “You are not going to make it out of here.” The mob, made up of 60 people, surrounded the officer as the officer had tried taking a subject into custody for beating another man. During the assault, the officer’s two-way radio, his communications lifeline, was broken. The officer held the crowd back with his service weapon. Back-up officers eventually arrived and found a fully loaded large caliber rifle magazine on the scene. A total of five individuals were eventually arrested.

Why isn’t the public outraged? Why aren’t community members gathering at Oakland and Modesto PDs to show their support of law enforcement? It’s time for the silent majority to no longer be silent! Or maybe the silent majority is no more? If that’s the case, we’re in trouble – very serious trouble.

Pittsburgh, Philadelphia  April 4, 2009: Three Pittsburgh police officers were killed by a subject that was alledgedly afraid of President Obama limiting firearms ownership. Twenty-three-year-old Richard Poplawski killed officers Eric Kelly, Stephen Mayhle and Paul Sciullo III. Officers Mayhle and Sciullo were each shot in the head in an ambush by Poplawski.

Officer Kelly was killed when he responded to a call for help while on his way home after completing his shift. Poplawski, who was wearing body armor, was taken into custody with gunshot wounds to the legs.

We need to re-examine police tactics. It’s hard to speak ill of officers who died while performing their sworn duties, but we need to learn from the sacrifice of their lives.

Since the dead can’t speak, the living must learn from the sacrifices of the dead.