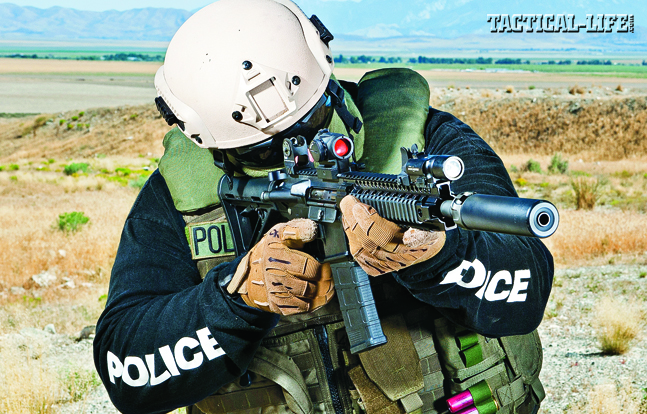 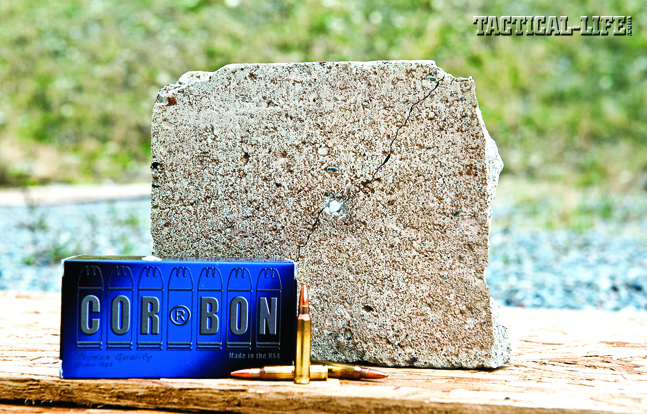 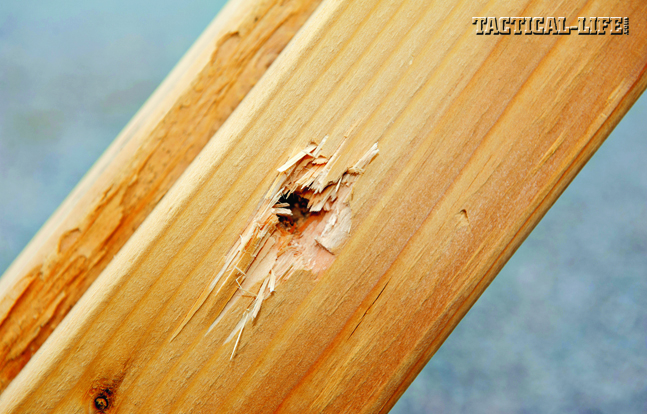 3 of 5
CorBon’s Urban Response 3
After passing through 4 inches of wood, the Urban Response round had already expanded considerably. It key-holed into the target while providing very little deflection. 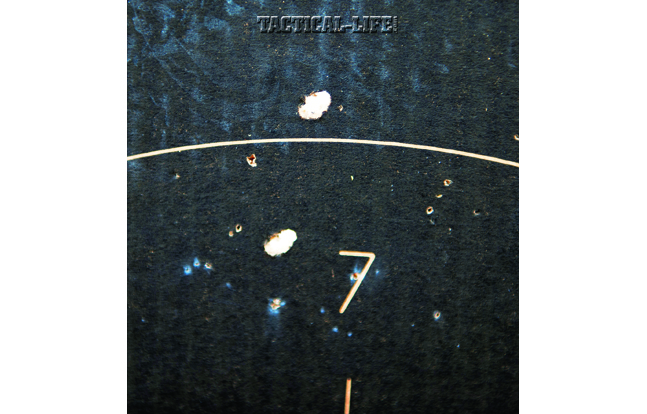 4 of 5
CorBon’s Urban Response 4
After passing through 4 inches of wood, the Urban Response round had already expanded considerably. It key-holed into the target while providing very little deflection. 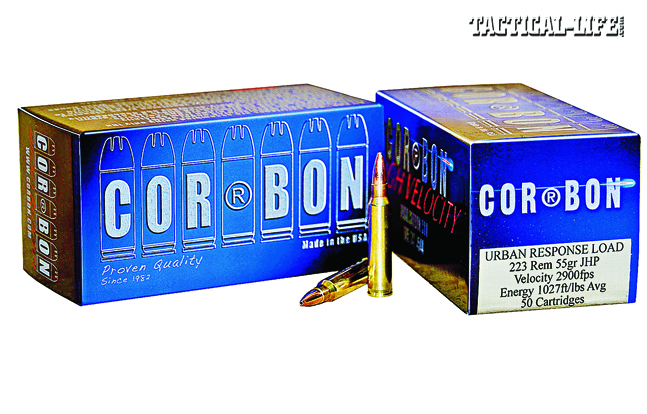 5 of 5
CorBon’s Urban Response 5
Velocity in feet per second (fps) by chronograph, and accuracy in inches for three 5-shot groups at 100 yards. 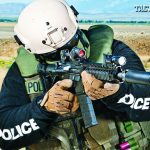 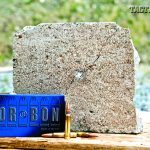 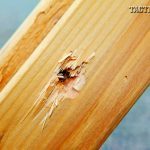 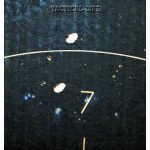 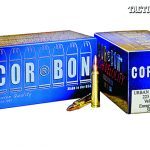 Over- or under-penetration in rifle ammo are concepts that remain misunderstood—often populated by a bit of marketing and mythology. Overpenetration is primarily an issue when the threat is missed. So let’s start with a critical point: The best way to eliminate overpenetration is to hit what you are shooting at. It sounds simple, but far too many agencies use ammunition selection to solve a training problem. Instances where a 5.56mm bullet “passes through” a threat and remains lethal are rare—even with bonded bullets. It can happen and does, but it is not the primary issue when it comes to overpenetration. A good friend related several instances where rifle rounds exited windows, walls and doors to pass by him while on the perimeter. These were not rounds that “overpenetrated” through a threat, but errant rounds missing the target completely.

While the lethal result from downrange fire may be overpenetration, the cause is generally under-expansion. Generally, bullets designed for tactical use are built to expand within the threat. They may need to pass through a medium (glass, a car door, etc.) first, but ultimately, once on target, the idea is to expend the bullet’s energy within that threat. This is accomplished through bullet expansion, jacket separation or a combination of both. Expanding bullets lose energy and velocity quickly. Those with soft jackets separate, turning into multiple small projectiles that, again, lose energy and velocity. These same effects contribute to less overpenetration when you miss and the round ends up in a wall. The longer the bullet stays together (consider a bonded bullet, for example), the more it penetrates and remains lethal beyond the wall or other mediums it hits. That is great if you need to fight in, through or around a car, but in a house, it may not be what you want.

CorBon has been building high-quality self-defense ammunition for decades. The company was founded on the principal that duty ammunition needs to be 100 percent reliable, powerful and effective. CorBon has always used the highest-quality components with an attention to detail to which not all companies adhere. Where bullets did not exist to accomplish the desired effect, the company has designed its own. The result: some of the highest-quality duty, hunting and self-defense ammunition on the market today.

The company’s Urban Response ammo is a .223 Remington, 55-grain loading designed to expand and separate. The 55-grain bullet weight allows for significant energy with reliable operation in most .223/5.56mm rifles. Using a jacketed hollow point (JHP) increases expansion while maintaining the best possible accuracy. Its lead core is soft and its jacket is thin, encouraging separation as well as expansion. The ammo is loaded using Lapua match-grade brass to maintain consistency and reliability under the harshest conditions. While not a “match” load per se, its attention to detail meets or exceeds many other company’s match loadings. With a listed velocity of 2,900 feet per second (fps), CorBon’s 55-grain Urban Response ammo delivers plenty of energy at realistic distances. Designed for use with entry teams, for home defense or in urban environments, it is well suited to those tasks.

Range Testing
To wring out CorBon’s new ammo, I used an IWI Tavor SAR as my primary test platform. The Tavor SAR’s bullpup design is really handy indoors yet maintains a 16.5-inch barrel for better terminal ballistics. I also tested the Urban Response ammo in my Primary Weapons Systems (PWS) MK110, which has a 10-inch-barreled upper mated to a Daniel Defense SBR lower. This setup has seen more than a few entries over the years and has proven to be a reliable and accurate entry carbine.

CorBon says this ammunition is “sub-MOA,” making it about as accurate as you can get in this caliber. It’s possible to shoot groups measuring less than an inch with the Tavor SAR, but it’s rare. When tiny groups do occur with this rifle, it’s generally with heavier bullets. But the CorBon ammo yielded a 1-inch group using an EOTech sight and 3X magnifier. That is as well as I can shoot this rifle—it’s excellent accuracy. The PWS did the same thing using an Aimpoint optic and magnifier. With the appropriate rifle, I’m sure the ammo can produce sub-MOA results—there just wasn’t one around at the time of the test, nor is this kind of accuracy a requirement for any practical duty application. Shooting at 50 yards from a supported position on a barricade, the ammo consistently grouped into less than an inch.

The Urban Response ammo ran reliably in both carbines. The PWS was tested with and without a 5.56mm suppressor. It functioned flawlessly during both controlled and fast repetitive fire. Ejection patterns out of the Tavor SAR were incredibly consistent, indicating very tight tolerances.

The ammo was also pretty clean, and I definitely noticed this when running the PWS with a suppressor. Its average velocity was pretty significant, too, given the 10-inch barrel: 2,725 fps. This carbine’s lower receiver uses an H1 buffer, and if fed a substantial diet, an H2 might be in order. Fired out of the Tavor SAR, the Urban Response had an average velocity of 2,908 fps. Most 55-grain FMJ ammo is in the 2,750- to 2,800-fps range out of a 16-inch-barreled carbine, so this is consistently higher.

Intermediate Barriers
Although less than scientific, it can be illustrative to shoot through some common construction items. The idea here is to see what this bullet does if a miss sends a round into a wall. All the testing was done at 25 yards, about as far as it gets in a typical entry scenario. I fired the Urban Response ammo through a single 2×4, two stacked together and a cedar deck panel (2×6). I also fired some rounds through a cinder block, some plywood and sheetrock. All testing was done with a target about 24 inches behind the medium.

Firing through a single 2×4, the bullet passed through with almost zero deflection. The exit hole was about the same size as the entry hole, but impacts on paper showed clear expansion and/or separation. Having done this with bonded bullets, you wouldn’t notice the wood was even there. Firing through two 2x4s stacked together, it was even clearer: This bullet is going to expand quickly. The exit hole was much larger, with noticeable expansion and splintering. Impacts on the target were similar, with either key-holing or a clear jacket separation and very little deflection. Shooting through plywood and sheetrock, the bullets responded similarly, with clear indication that the round expands and/or separates very quickly.

Shooting through the cinder block yielded rather explosive effects, almost like a frangible round. The Urban Response bullet blew the block apart, but there was no discernable impact on the target set only 24 inches behind the block. Lots of fragmentation and no single impact could be located. The same test with some bonded rounds will yield discernable impacts if the block is not filled with concrete. Results were not noticeably different using either weapon.

Close Quarters
Factory testing in gel yielded 10 inches of penetration—very limited by 5.56mm standards and well suited to close-quarters use. At 2,900 fps, the bullet is going to go through most barriers without issue, so moderately armored threats should not be a problem at close range. When encountering most household building materials, CorBon’s Urban Response deflects little and expands almost immediately, making long-range overpenetration issues on misses less of an issue. The ammo functioned reliably and was very accurate, making it well suited to police or self-defense use.

CorBon’s Urban Defense is just about perfect for urban, CQB environments. If there is a need for penetrating car doors, walls or harder targets, you are going to want to stick with a bonded bullet. But, if you are on entry duty, defending your home or shooting across the street in an urban environment, this would be an excellent choice. For more information, visit corbon.com or call 800-626-7266. 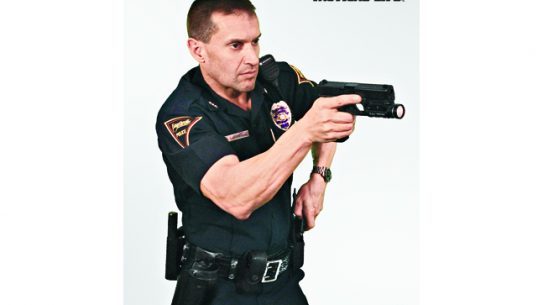