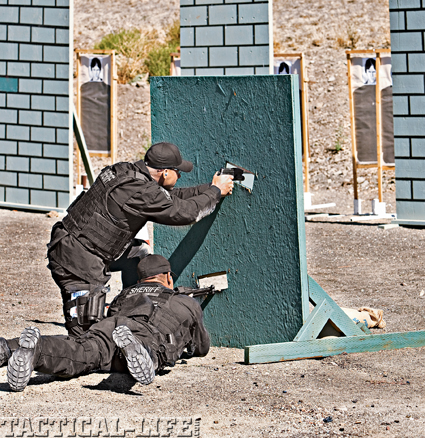 At a time when training budgets are being cut, ammo is hard to find and departments are laying off cops, local IDPA club matches offer inexpensive “live fire scenario training experiences.”

When I first pinned on the badge in the early 1970s, there were still some police departments that had little to no firearms refresher training, and those who just stood in one place and shot for qualification were considered mainstream or even cutting edge. Basic shooting ability is, of course, a non-negotiable baseline for skill in surviving armed encounters, but movement, cover, and related tactics must be incorporated in a total program.

I was reminded of this recently when I shot the Florida IDPA State Championships. The International Defensive Pistol Association had a lot of cops and ex-cops involved in it’s founding, and it shows in their format. Most of their scenarios are more like a SWAT team’s “live fire shoot house” than a traditional square range, and the price of an entry fee is an inexpensive way for any officer to test critical survival skills. I was one of three LEOs on my shooting squad, and I saw that concept reinforced again and again during the match.

Cover
In Case One, NYPD Stakeout Squad cop Jim Cirillo had to confront three armed robbers in a market, one of them a long distance away at the door. Under fire, Cirillo – who had been forced to emerge from cover to confront them – couldn’t get close to anything solid enough to stop a bullet, but managed to get a food products display between him and the incoming fire. As he was shooting all three perps, one of them fired a shot that stopped in a pile of canned peanuts midway between the streetwise cop and the bad guys. Reconstruction showed that the bullet would otherwise have struck Cirillo in the groin. He joked later, “Nuts saved mine!” Uninjured, Cirillo managed to shoot and neutralize all three perps.

In Case Two, an officer running to get tight behind cover was killed by a perp whose bullets might have been stopped had the policeman simply side-stepped and put a handily-placed automobile halfway between him and his antagonist. In the IDPA match, it became apparent to all participants that the main thing was getting something that stopped bullets between you and the dirtbag who is shooting at you.

At a time when training budgets are being cut, ammo is hard to find…