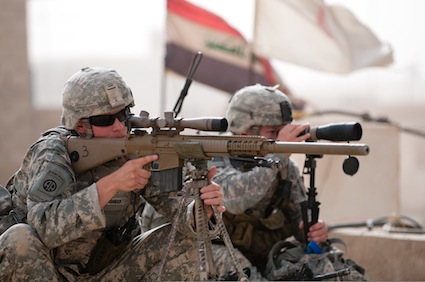 The Marine Corps is rolling out a new, semi-automatic sniper rifle to scout sniper platoons, but holding fire for now on fielding a long-range precision rifle designed to drop targets at 1,500 meters.

A handful of Marines have used similar weapons downrange before, but the M110 did not receive full fielding approval until the fall, according to an internal memo obtained by Marine Corps Times. It will be fielded to augment the bolt-action 7.62mm M40A5 sniper rifle already in use, and replace two other semi-automatic 7.62mm weapons — the M39 enhanced marksman rifle and the Mark 11 Mod 1 sniper rifle — said Jim Katzaman, a spokesman at Marine Corps Systems Command, out of Quantico, Va.

Marine officials declined to provide more details about the fielding plans, but the memo said fielding will occur in two phases. Deploying units and schools teaching scout sniper and designated marksman skills were scheduled to begin receiving M110s in January, with fielding continuing through the fall. The second phase calls for filling additional requirements in deploying units and replacing the M39 rifle on a one-for-one basis beginning next fall.

The Corps exercised an option on an existing Army contract for the M110 in June, buying 803 for $8.3 million, said retired Lt. Col. David Lutz, vice president for military operations at Knight’s. Scout sniper teams likely will carry both the M40A5 and the M110 on many missions, he said. More weapons could be purchased as the Corps completes fielding.

“It’s probably a toss-up whether they’ll go out with the M40 or the M110 as the primary weapon,” Lutz said. “I think it’ll depend on what they’re facing on a given day. If it’s a one-shot, one-kill scenario, then it’ll probably still be the M40 getting primary use.”