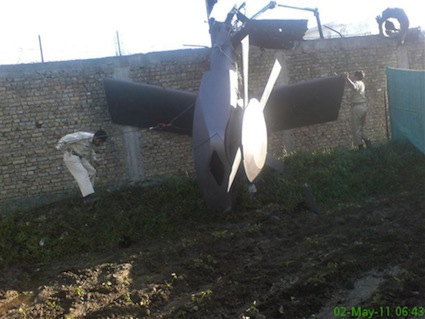 Part of a damaged helicopter is seen lying near the compound after U.S. Navy SEAL commandos killed al Qaeda leader Osama bin Laden in Abbottabad, May 2, 2011. Bin Laden was killed in the U.S. special forces assault on the Pakistani compound, then quickly buried at sea, in a dramatic end to the long manhunt for the al Qaeda leader who had been the guiding star of global terrorism. Picture taken May 2, 2011. REUTERS/Stringer

So what machine exactly experienced the hard landing described above? Short answer: we don’t know for sure. Long answer: It seems that the tail rotor visible in the picture belongs to a highly modified version of the H-60, the chopper of choice of the special forces for more than 30 years. Aviation Week doesn’t beat around the bush, claiming:

A previously undisclosed, classified stealth helicopter apparently was part of the U.S. task force that killed Osama bin Laden in Pakistan on May 1.

Stealth technology on helicopters is not itself new, but the fact that a previously unknown machine was used in this raid is yet another proof of the degree of importance that this mission had for U.S. commanders.

Part of a damaged helicopter is seen lying near the compound after U.S. Navy…