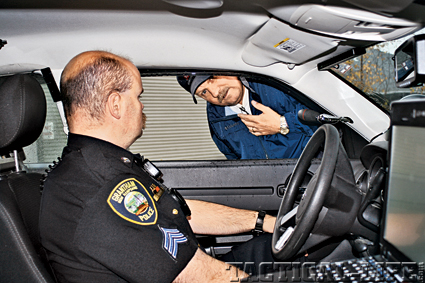 When a suspicious-looking man approaches his patrol car, Sgt John Parsons of Grantham (NH) PD lets his hand drift down to his ankle, where—unseen by the man outside the vehicle—his hand is on his more-accessible backup gun. This officer needs to be fully aware of not only the person talking to him, but
other possible threats behind him.

A past study by the Los Angeles Police Department determined that a disturbing number of American police officers a year were being killed in ambush attacks. Sources other than LAPD speculated that by mid-year 2011, almost half of LODDs (Line of Duty Deaths) thus far in the year were the result of ambush-type attacks on police.

It is a pattern we’ve seen coast to coast.

Case One: Four on-duty uniformed officers are taking a break in a coffee shop when a felon surreptitiously draws a handgun and opens fire on them at close range. In moments, all four are dead or dying. Only one officer has been able to return fire. The wounded killer escapes, only to die a few days later by the Glock of an officer he tried to ambush in another city.

Case Two: An officer on patrol stops his cruiser at a red light. Without warning, a vehicle draws parallel to him and hoses him with a barrage of lethal gunfire.