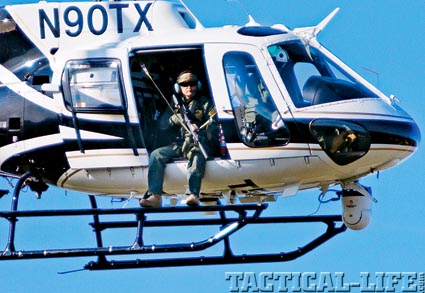 Eleven years ago, I had a conversation with my chief of police on September 11, 2001. I was actually teaching a patrol rifle class on the morning of 9/11. After talking to the chief in the afternoon, when I climbed into one of our helicopters that night for my primary assignment as a full-time flight officer, I was carrying a rifle with the chief’s blessing. This was the day “things changed” for how we thought about possibly using lethal force from the air. While I carried a rifle from that day on in our helicopter, the reality was that I had no specialized training on engaging ground targets from the air. We were simply working on the premise that my firearms skills would easily translate from the ground to the air.

Fast-forward a decade and I watched an incredible display of shooting skill delivered by a flight crew member from the Texas Department of Public Safety (DPS) shooting his LaRue OBR rifle at ground targets from DPS’ helicopter in horrendous wind conditions that only a former LE flight officer could appreciate. I knew how hard it was to fly that mission, let alone be able to engage pumpkins from a wind-tossed helicopter. After talking to the pilot and crew, I was able to wrangle my way into an “Aerial Platform” shooting class taught by Craft International with several members of the Texas DPS and other Texas police officers. Because of the current border wars and strategic interests for potential terrorists, Texas police officers have made using helicopters a priority, and they take helo-platform shooting very seriously.

Craft International is a fast-rising training organization that is headed by Chris Kyle, who has been recognized as one of the most accomplished snipers in U.S. military history while serving as a U.S. Navy SEAL. The Director of Training, Mark Spicer, taught our class. Mark is a retired British Army sergeant major, where he was a sniper, with very extensive real-world experience. He is very highly regarded as both an instructor and subject matter expert. 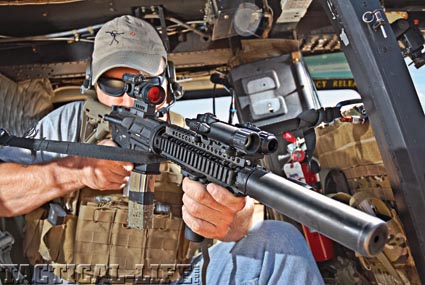 Optics that allow fast, both-eyes-open sighting are essential for these operations.

This class was totally geared towards professionals working in both the aviation and firearms side of the equation. The use of a helicopter as a dedicated shooting platform requires far more preparation than traditional vehicles. Many factors come into play. These are professionally addressed by the Craft instructors, and it is very obvious that they are intimately familiar with operations from a helicopter platform. The classroom presentation was very good, and the course materials were high quality. The especially important part of the course involved charts giving shooters their “lag” distances for various speeds and altitudes. These are worth the cost of the class alone. Rigging, and using the proper rigs for various helicopters, was another important topic covered.

One very unique aspect of the course I attended was the vast amount of experience in the room from a variety of Texas DPS flight officers, pilots and Texas Ranger Division SWAT officers, combined with both SWAT officers and firearms instructors from Dallas PD and nearby police departments. The instructors showed an “ego-free” level of professionalism by having the various experts in the room expound on their own experiences, combining with that of the instructors. This made for a great learning environment, with professionals all trying to help each other excel in what is a very specialized skill set. I was also impressed with the Texas DPS sending their own pilots and AS 350 helicopter to maximize the training for both gunners and pilots. I know firsthand how difficult these missions are to fly, especially when combined with the added complexity of deploying a firearm.

Day two was spent shooting. We worked with a variety of safety equipment to keep us secured in the helicopter, and instructors hammered home the specialized gun handling protocols. Additionally, we covered the safest angles of fire and the required altitude of the helicopter to safely engage a single man-sized target confined on a single carbine range in an urban range facility. This course was not conducted in a wide-open desert. It was done operating around huge towers and power lines. Once “cleared hot” by our safety officer, our shooting window to deliver two precision rounds was between 1 to 2 seconds. Safety considerations and expectations for precise surgical shooting were very high. 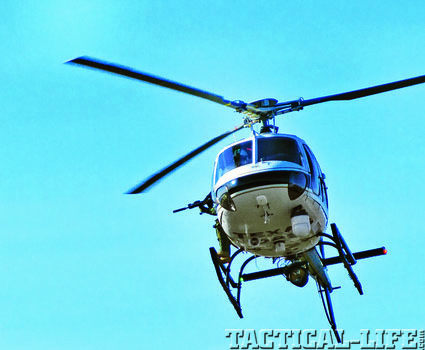 Suppressors should also be mandatory during aerial gunnery missions, as they protect the pilots’ hearing and ability to focus. Allen Lash photo

Once airborne, the complexity of using a moving helicopter as a shooting platform became very apparent. I am very comfortable in the air. I spent every working day for four years with a helicopter for a patrol vehicle, so I was actually thrilled to be back in the air. The biggest issue is trying to get your body stabilized in conjunction with what the helicopter is doing, and then shooting when you are given the command that you are cleared to fire.

The first set of shooting evolutions was performed while exiting a very hard right-hand turn inside the wires, and you had to fire right as the helicopter leveled or your window would close quickly. A hard turn like this puts some serious “G” forces on your body. Your shots then had to lag—or, with a reverse lead—in which your sights travel in the opposite direction of the helicopter, aiming a good distance behind the target. The actual lag formula for speed and altitude is proprietary to this class. This was, by far, the hardest shooting I have ever done. It is not simply hosing or walking your rounds in. You are training to deliver rounds on target in an environment where you will be accountable for your rounds, and Craft trains you with that in mind.

Our second set of evolutions brought us in at a higher speed, and we came in straight over the wires with a very rapid descent once clear. The “G” forces were again a factor, but from a different direction. On this evolution, things happened much faster. A real honor for me was having Chris Kyle in the front seat of the aircraft calling my shots during this evolution. Having one of the most accomplished snipers in U.S. military history calling my hits—and getting on me when I missed—was an added bonus. After debriefing my flight, instructors assessed my accuracy. It was obvious that this type of shooting is something that needs to be regularly practiced. It’s a very unique skill set.

I used a Colt AR-15 lower with a Centurion Arms 5.56mm C4 railed upper receiver and 16-inch barrel. I utilized an Aimpoint CompM4 sight with a 3X magnifier, both in LaRue Tactical mounts. The ability to pivot the magnifier out of the way in order to use just the red dot with both eyes open is critical
in this type of shooting. The red-dot sight is the optic of choice for this kind of shooting. Several of the Texas DPS members were using LaRue 7.62mm OBRs in various configurations. These are exceptionally good tools for this
kind of shooting.

I would also highly recommend a good suppressor. Because of the positioning of the muzzle when utilized from the back passenger area of the helicopter, the pilots take a real beating from the concussion of the rounds being fired. This is magnified with 7.62mm rifles and muzzle brakes. We would switch pilots regularly to help them maintain the high level of concentration needed to fly the precise maneuvers required to safely get their gunners on target. This is another reason why it was important for the pilots to train as hard as their gunners do. Everyone on board becomes part of the crew, and it is imperative that any LE unit undertaking this mission understands that the entire team on board must work together seamlessly.

Our world has changed in the last 10 years. With the increase of worldwide terrorist attacks on civilian centers, combined with cartel violence and narco-terrorism, it’s important that LE agencies adapt to these new trends in terrorist and criminal activity. Helicopters are important tools to keep us safe—we can rapidly place shooters in a position to stop violent and dangerous situations. Agencies that have helicopter assets should seriously consider adding the aerial-platform shooting mission to their capabilities. Craft International does a good job in delivering this training in a professional manner. For more information, visit thecraft.com or call 214-550-6960. 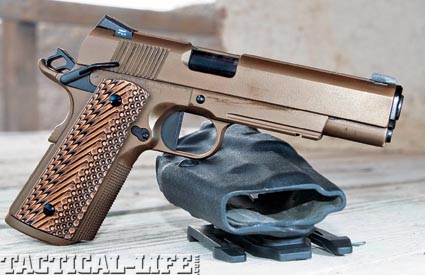