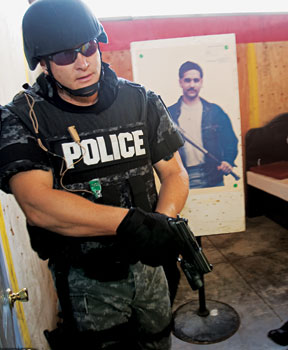 There was a time when law enforcement officers and trainers alike considered shooting and defensive tactics to be separate disciplines. The rationale was that if the suspect was within punching range, the officer relied on defensive tactics such as control holds, pain compliance techniques, personal body weapons, pepper spray, or a baton. If the suspect was encountered from a further distance and determined to be armed, the officer resorted to their firearm. 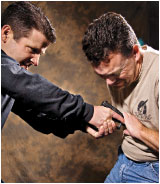 This overly simplistic view of combat has ingrained in officer’s psyche the notion that while defensive tactics were employed at close range, firearms were typically used from considerable distances. This misconception was perpetuated by the emphasis many agencies placed on shooting stationary targets from the 25-yard-line and beyond.

During a critical incident, an officer may have to transition from “shooter” to “fighter” and vice versa. Since the vast majority of LE shootings occur at distances of less than 10 feet, there’s a good chance that what starts out as a shooting incident will digress to a violent hand-to-hand combat situation. This is mainly attributed to the fact that handgun rounds have a relatively low probability of immediately incapacitating a suspect. As such, officers need to be well versed in fighting with their firearm. This requires the successful integration of shooting and defensive tactical skills including safe gun handling, striking, close-quarter shooting, and firearm retention.

Safe Gun Handling
During a violent struggle, there is a good chance that you will reflexively clinch your fist. This could occur as a result of being startled, losing your balance, or grabbing hold of the suspect with your other hand. When holding a firearm, clenching your fist is likely to result in pulling the trigger and discharging the weapon. There are many terms used to describe this phenomenon including “accidental discharge,” “negligent discharge,” and “unintended discharge.” No matter what you call it, pulling the trigger when you weren’t intending to carries with it potential civil and criminal consequences. Even worse is the possibility of injuring or killing an unintended party, or the suspect when not warranted.

To minimize the chances of unintentionally firing your weapon, your finger should be kept out of the trigger guard and positioned along the frame of the weapon until you have made a conscious decision to fire. This position is sometimes referred to as “master grip.” The master grip is achieved the moment you grab your gun and maintained until you have decided to use lethal force to stop an immediate threat of death or serious bodily injury to you or a third party.

Another gun handling di­­lemma occurs after you have recognized a threat and drawn your gun, only to be charged by an aggressive but unarmed suspect. De-escalating from a deadly force response to go “hands on” can be extremely difficult. While holstering would be your safest bet, most of us aren’t well versed in the art of “speed holstering.” Even if you manage to holster your gun as the suspect charges you, securing the safety mechanisms on a conventional leather style holster would certainly be a challenge. Ironically, if there was ever a time you needed the safety mechanisms on your holster engaged, it’s when an unarmed suspect is charging you. Some modern holsters, such as the BlackHawk Serpa Auto Lock line help solve this problem because the safety mechanisms are automatically engaged upon holstering.

Striking With Muzzle
When your gun is in-hand and holstering is not an option, you could use the muzzle of your gun to strike a suspect who is fighting you or attempting to disarm you. This should be done while maintaining a firm, two-handed grip on the gun. For obvious reasons, it is critical that you maintain a master grip when delivering a muzzle strike. Due to the dangers associated with using the muzzle of the gun to strike a suspect, some agencies prohibit such a tactic.

Striking with personal body weapons such as your palm, elbow, knee, even your head is a viable option during close-quarter combat, with or without weapons. When your gun is drawn, you need to transition to a one-handed close quarter hold in order to keep your gun away from the suspect and free your non-gun hand to fight with.

Close Quarter Shooting
The one-handed close-quarter hold places your gun farther from the suspect, making it more difficult for him to grab hold of it. This position frees your non-gun hand to fend incoming strikes or better yet, to strike the suspect. Striking under a suspect’s chin with the palm of your non-gun hand and driving him backward exposes his torso to your handgun rounds if deadly force is warranted. A non-deadly force application of this technique would be to drive the suspect back to disengage then create distance that allows you to assess the situation.

The one-handed close quarter hold is achieved by holding your gun close to your chest, with the slide canted slightly outward. This enables the slide to cycle freely and reduces the likelihood of it snagging on your clothing, which could induce a malfunction. It’s important to use a physical reference such as touching the bottom portion of the magazine against your side or your thumb to your nipple. This breeds consistency and allows you to aim by feel since you will be unable to use your sights. When your gun is anchored to your body as described, it limits the range of motion in your wrist, which translates to more predictable shot placement.

The two-handed close-quarter hold en­­ables you to keep your handgun close to your body while maintaining a two-handed shooting grip with the muzzle on target. This position helps prevent you from leading with the muzzle when negotiating a corner. As you can imagine, if your gun enters a room before you, it telegraphs your movement, leaving you vulnerable to being shot by a suspect lying in wait or having your gun grabbed by a suspect hiding inside the room. The two-handed close-quarter hold not only makes it more difficult for a suspect to grab your gun, it is a very secure hold from which you can employ an effective firearm retention technique to thwart a gun grab.

To achieve the two-handed close-quarter hold, simply position your weapon to the center of your chest so that the rear of the slide is a few inches from your body. If you don’t leave a gap between the gun and your chest, the slide will strike you, resulting in a malfunction. As with the one-handed version, it’s important to have a physical reference. In this case, pressing the interior of your elbows against your sides orients the muzzle to a threat directly in front of you. This allows you to hit your target without the benefit of seeing your sights. You should be able to catch a glimpse of your gun out of your peripheral vision, which helps confirm your muzzle is oriented to the threat. By simply extending and slightly raising your arms, you can transition to a sighted fire position.

Firearm Retention
When your gun is in-hand and a suspect attempts to disarm you, drive the muzzle into the suspect to inflict pain and distract him. Then immediately pull the handgun toward your chest and twist it (counter-clockwise if you’re right handed). This is likely to result in the front sight of the gun cutting the suspect’s hand, thereby compromising his grip. In most cases, this technique alone will enable you to extract the handgun from the suspect’s hands. However, is this doesn’t work, it’s time to move to Plan B.

Remember any time the suspect has grabbed your semi-automatic handgun, there is a good chance the weapon has been rendered inoperable or out of battery. To remedy this, you should tap the magazine, rack the slide, and assess the situation. (Obviously, revolvers are immune to this problem since there is no slide to cycle).

Conclusion
There’s more to attaining proficiency with a handgun than poking holes in a cardboard silhouette from the 25-yard line. If you are involved in a critical incident involving the use of your firearm, it’s likely that your adversary will be up close and personal. To further complicate matters, what is clearly a “shoot” scenario can quickly turn into a “no-shoot” scenario requiring an immediate and decisive “hands on” response. When this occurs, it is imperative that you are well versed in safe gun handling, striking, close quarter-shooting, and firearm retention tactics. Remember that it is your training and will to win—not your firearm—that will save the day. 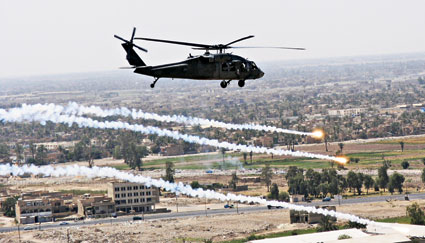