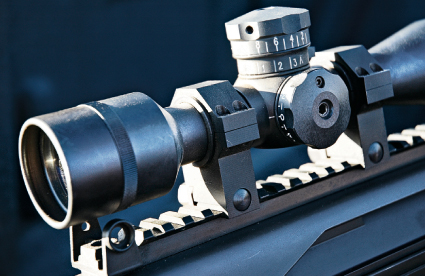 Attaching a scope to a rifle might seem as simple as knotting a hook on a leader. But there’s a right way and a wrong way. A scope must not only be secure in its rings, the rings must be secure on the base and the base secure on the rifle. The scope must be properly oriented and located fore-and-aft to give you quick aim from many positions, while clearing your brow during recoil. Improper mounting can mar the mounting hardware and the scope’s finish, and even damage the sight internally. 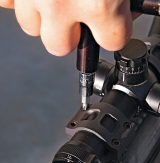 Probably few shooters read instructions when mounting a scope. “It’s intuitive,” they say. Perhaps. But what’s intuitive to one may not be to another. Intuition can carry you into the realm of assumption—dangerous ground indeed. Whether you count on your rifle to kill big game, shoot holes in paper or save lives in tactical applications, you’ll shoot better knowing that the scope is properly affixed and will perform as designed and desired.

If someone handed you a rifle and told you he assumed the mount was tight and the scope zeroed, would you carry that outfit to fire at a terrorist holding a hostage?

By The Numbers
What follows is how to affix a scope so it stays put, and so, once zeroed, the bullets land where you aim. Doing it right is far easier, as you have to do it but once.

Remove filler screws with a screwdriver bit that fits them. Clear only the holes you’ll be using. If the rifle has been tapped for 8-40 instead of the traditional but smaller 6-48 screws, you’ll get a stronger union of scope-base-to-rifle. Consider having 6-48 holes re-drilled and tapped for 8-40s on hard-kicking rifles, but first make sure the mount you want to use will accommodate the change.

1. Swab the receiver with a cloth dipped in mild solvent. Then wipe it dry. Next, polish it with a lightly oiled rag.
2. Give the same treatment to scope bases and rings, keeping ring halves paired and oriented as they came from the package. Dry inside ring surfaces after a pass with the oily rag. You want to prevent rust, but not promote slippage.
3. Put base and ring screws in a tray with the filler screws and any other small parts. Put the tray where you will not knock it over. Then move it to where you cannot possibly knock it over.
4. When attaching two bases or two rings that mate directly to the rifle’s receiver, check that you have them in the proper place and oriented to best advantage. Base screw spacing may or may not differ, fore and aft. When it doesn’t, the bases are often the same height. But Ruger rings, for example, can differ in height. While each will fit either front or back, you’ll damage the scope if you install it with the rings switched. With two-piece bases, reversing either may give you more latitude for spacing on a short-coupled scope, or add eye relief or extend support farther out on a long tube. Make sure that scope bases don’t overhang the ejection port, where they can impede loading and ejection. One advantage of Picatinny rails, increasingly popular on heavy tactical rifles like Barrett’s and on lighter bolt-action and AR-type guns, is the long mounting surface, which allows ring placement almost anywhere you choose on the scope. As scope turrets get bigger, ocular housings longer and front bells closer to the dials, “free tube” diminishes, so you’ll appreciate the rail’s ability to accommodate many ring spacings for proper eye relief.
5. With the scope base on the rifle, start the screws with a close-fitting magnetic screwdriver tip. Don’t attach the handle until the screws are seated, then cinch them down alternately. Now check scope clearance with a dollar bill under the objective bell. Make sure the bolt knob clears the ocular housing when you cycle a bolt-action. And check for screw protrusion into the action. Friction during bolt closure, or failure of the bolt head to rotate into battery may indicate a long screw. Replace it with a shorter one.
6. Finish tightening the base screws. Incidentally, Torx-head screws offer more purchase than do hex-head screws, and better resist damage than slotted screws. When cinching the base, use the long end of a Torx wrench for added leverage. A torque wrench is also useful, as it ensures that you’ll get screws equally tight. Thread-seizing compound shouldn’t be necessary. But if it gives you peace of mind, use blue Loc-Tite (it allows screw removal more readily than the red formula). If, instead of installing a base, you’re attaching rings that mate directly to receiver or quarter-rib (e.g. Ruger’s and Talley lightweights), snug but do not tighten them yet. You’ll want to insert the scope before giving those screws a final turn.
7. Place the rings on the scope tube and turn the ring screws finger-tight. Then set the rings on the base and snug them there, again finger-tight (you may later wish to relocate the rings to other places on the rail). With the scope still easily movable in the rings, slide the tube ahead until the ocular lens is a comfortable distance from your eye, in other words, establish proper eye relief. Check eye relief not only off-hand, but from prone, sitting and kneeling positions. Too much eye relief is better than too little. On the other hand, if you shoot in cold weather or with a heavy competition jacket, don that clothing at this point to ensure you get a full field of view with the rifle butt padded with this extra clothing. Now double-check the ring position on the scope. Rings should not contact the junctures of objective or ocular bells or the turret. As much as the base allows, locate the rings on the tube to give it maximum support while affording at least 1/8 of an inch clear tube either side of each ring. Mark the tube against a ring with a pencil when you’re satisfied with the eye relief and ring spacing.
8. Now rotate the scope until the vertical reticle wire aligns with your rifle’s buttplate. Midway’s “Level-Level-Level” will help you establish vertical and horizontal planes quickly. A tilted reticle encourages you to cant the rifle, which can cause errant shots, especially at long range.
9. Check that the pencil mark you made on the scope tube is still in the same place relative to the ring, then cinch the ring screws with a screwdriver bit or by turning the screw with a Torx wrench lightly with your fingers. Snug them a half-turn at a time, alternating as you’d cross-tighten lug nuts on an automobile wheel. Ring screws needn’t be as tight as base screws. Too much muscle here can strip a hole or mar the scope. Use a torque wrench to ensure equal pressure, to even out—and limit—the muscle you can apply to the short end of a Torx wrench.

Things to Avoid
Common mistakes include not releasing enough tension on the rings when sliding the scope fore and aft to adjust eye relief, or when rotating it to square up the reticle. The result can be a scarred tube. If you feel undue tension, back off those screws! If the scope grates in the rings, remove the scope and feather the ring edges with an Arkansas stone and oil, being sure to wipe the ring clean of oil afterward.

When using a Torx wrench or Allen wrench or screwdriver bit, apply plenty of hand pressure on the tool into the socket as you make the final turns. A tool that rides out of its place will mar the screw. The nuts commonly used to clamp stout rings to Picatinny rails on rifles like the Barrett .50s are best tightened with sockets, not open-ended wrenches—again to help protect visible corners and edges and maintain the dimensional integrity of the hex shape screws.

Making a critical shot count depends on many factors. Considering effects like range, bullet drop, and wind speed/direction are only part of the equation. If a scope isn’t properly mounted, none of these other factors really matter. The tactical shooter has to know that his rifle will perform consistently every time. An scope that isn’t mounted correctly can shift and change the optical orientation with respect to the target. Taking special care to ensure that a scope is properly mounted can mean the difference between life and death for those in uniform. Knowing that your tactical rifle will perform the same way every shot means that the only factors you have to consider have nothing to do with your rifle’s performance. 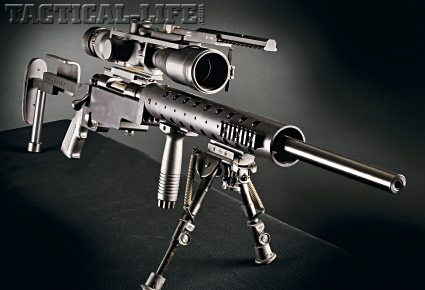