by Doug Larson
in Uncategorized
0

Three-Gun competitions are hot. Matches and clubs are popping up all over the country, and membership is booming. One reason, besides people simply liking to shoot guns in a safe, competitive environment, is that these competitions allow the participant to use a handgun, shotgun and rifle in the same match while engaging targets in a simulated combat or self-defense scenario. While not the same as training for a real-world self-defense encounter with a bad guy, competitors do gain valuable skills that carry over into the real world.

Having the right equipment for the 3-Gun game is important, and since 3-Gun competitions have parallels in the real world of self-defense gunfighting, it makes sense to use equipment that can serve in both the competitive and self-defense roles. That’s the thinking behind  Colt‘s latest AR-15 offering, the CSR-1516, which is billed as a marriage between a competition and a military carbine.

Colt has a sterling reputation for producing quality AR-15s and M16s, and has partnered with a company that can uphold that reputation in the manufacture of competition and sporting ARs. Bold Ideas Texas fit the bill and produces the CSR-1516, as well as other Colt-branded products, in its Breckenridge, Texas, plant under license from Colt.

This gun doesn’t look like the typical military M16, and it’s not a mil-spec gun, but it doesn’t have to be in order to be great for competition use. For 3-Gun matches, accuracy, speed, reliability and handling are the primary requirements, and these characteristics were built into the CSR-1516. 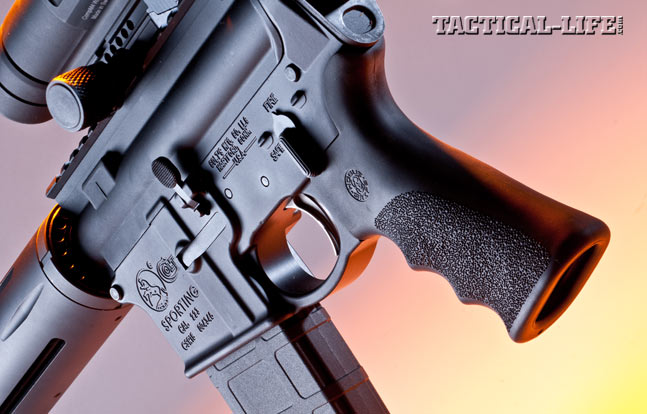 Starting up front, this AR has a birdcage-style flash suppressor/muzzle brake that looks similar to the military’s A2 version, but is a bit longer and has slots that are configured a little differently. The bottom line: The brake is pretty effective at reducing muzzle rise, which helps greatly in making quick follow-up shots. I wasn’t able to test its effectiveness as a flash suppressor, but it looks like it would be at least as effective as the military version.

The black, manganese-phosphate-finished barrel is 16 inches long and would be classified as being a mid-weight—somewhere between a bull and a pencil thin, lightweight barrel. It’s match grade and manufactured from 4140 chrome-moly steel with six-groove, 1-in-8-inch-twist button rifling. The twist rate is designed to be effective at stabilizing a wider range of bullet weights than a 1-in-7- or 1-in-9-inch-twist barrel. The barrel and chamber are air-gauged to assure manufacturing precision, which translates into greater accuracy.

“For 3-Gun matches, accuracy, speed, reliability and handling are the primary requirements, and these characteristics were the built into the CSR-1516.”

Surrounding the barrel is a 12-inch-long, round handguard that is comfortable to hold. Because it is long, it permits the shooter to assume a far-forward grip with the off-hand, which promotes fast transitions from target to target and better control of muzzle rise. A short, removable Picatinny rail with seven slots is attached with two screws to the top of the handguard up front and can be used to mount a front sight. Additional sections of rail are available and can be attached at several places that are drilled and tapped along the top, sides and bottom of the handguard.

The flattop upper receiver has a Picatinny rail with 13 slots running its length. No sights are provided with this gun, leaving the shooter free to attach an optic or iron sights to suit his or her needs. In a departure from the typical AR upper, this one lacks a dust cover, leaving the ejection port open at all times. While some may condemn the gun for this, after careful consideration others will realize that, unless you’re operating in a very dusty, dirty environment under combat conditions, the dust cover will not be missed. A properly maintained and lubricated AR will run without malfunctions, and in a competitive environment, getting enough dirt into the upper receiver and not being able to clean or lubricate it is unlikely.

Another notable difference between a typical AR upper and the CSR-1516’s is the lack of a bolt forward assist. The designer of the AR-15, Eugene Stoner, did not think a forward assist was needed and did not include one, but one was added at government insistence. Stoner knew what he was doing because the forward assist can cause a lot of unnecessary problems, and switched-on operators don’t use it. If a round fails to chamber, the solution is to run the charging handle again and try a new round. If that doesn’t work, trying to jam the round into the chamber with the forward assist may get the round fully chambered, but it may be so tightly wedged in there that the empty case sticks after firing it and the gun is rendered useless for anything other than a club. In competition, that would be a problem; in a gunfight, it would be catastrophic. So the forward assist should not be missed. Besides, eliminating it and the dust cover keeps costs down and allows the gun to retail for a lower price.

Inside the upper receiver reside the bolt and bolt carrier, which appear to be the same as those found in a military M4 Carbine. The all-important gas key on my test sample was properly staked to prevent it from coming loose during firing, and its interior as well as that of the bolt carrier was chrome lined. The upper receiver also has M4 feed ramp cuts to promote more reliable feeding. Not all ARs do.

Another price-reducing feature of the CSR-1516 is the triggerguard, which is fixed in place and is integral to the forged lower receiver. It is bowed slightly to provide plenty of room for a gloved finger. The rest of the lower receiver looks like a typical AR’s, with the safety lever, bolt catch, magazine release and magazine well appearing to be standard for an AR. The magazine well is beveled to encourage fast reloads and, when pressed, the magazine release allowed the supplied Magpul 30-round PMAG to drop freely away.

“Given its price, accuracy and quick-handling features, the Colt CSR-1516 is a good one to consider for the competitor on a budget.”

The pistol grip is a Hogue rubber grip with finger grooves that will fit some shooters’ hands perfectly and will be hated by others. It is non-slip, though, and has a high, rounded backstrap that creates a longer trigger reach compared to a standard A2-style grip. If you don’t like it, you can easily change it out.

Colt has also installed a match-grade target trigger that has been nickel and Teflon coated. The one on my test gun broke cleanly at 6.25 pounds with very slight take-up, a clean break and a very positive reset. It’s a nice trigger.

The receiver extension or buffer tube is a modified military-style unit with a slightly smaller diameter than the commercial-sized tube. This is important if the owner wants to change buttstocks, as a commercial-sized buttstock will be a little loose. And instead of only four positions, as a true military tube has, this one has six positions. The castle nut that secures the tube to the lower receiver is not staked, as is called for in military specifications, but appears to be secured with thread-locker. This is an acceptable alternative, but makes removal of the tube much more difficult if the owner ever wants to do so. The buffer itself is of standard weight.

The buttstock looks very similar to the Colt military version but does not have the fixed sling loop at the toe. It appears that a plug can be removed if the owner wanted to install one, though. The buttstock does have the slot at the rear, just below the tube, for the attachment of a sling, but there is also a quick-detachable, ambidextrous sling swivel socket. However, if the owner wants to use a sling, an attachment point will need to be added to the handguard. That should be easy, because a Picatinny rail can be added at the 3, 6, or 9 o’clock positions.

Earlier, I mentioned that a 5.56mm NATO chamber may not be as accurate as a .223 Remington chamber. That may be the case, but the accuracy results for the test gun proved that this AR is pretty darn accurate. The best group obtained at 100 yards using a Leupold 1.5-5x20mm Mark 4 MR/T scope measured 0.76 inches using .223 Remington, 75-grain Hornady Match BTHP ammunition. The gun seemed to like the heavier, longer bullets. The Black Hills 5.56mm NATO, 50-grain Barnes TSX load printed a respectable average group size of 3.31 inches, but that is quite a bit more than the Hornady or Federal loads that were also tested. Almost every quality gun has a preference for one load over another, so with the right load, this is a very accurate gun. If the shooter’s skills are up to the task, it should provide good results on those 3-Gun stages requiring accurate shooting at longer ranges.

To test the gun’s handling qualities in tactical drills, I attached an EOTech XPS3 holographic weapon sight, which makes for lightning-fast target acquisition.

Although the gun is designed primarily for competition and sporting purposes, it can easily double as a self-defense gun. Given its price, accuracy and quick-handling features, the Colt CSR-1516 is a good one to consider for the competitor on a budget.