by Rob Garrett
in Uncategorized
0

Sometimes it is all about timing. I recently received an assignment to evaluate a custom precision rifle from American Precision Arms. While excited about the assignment, I knew that my experience with such rifles was not as extensive as I would like. There was also the problem with finding a range that would provide suitable distances to challenge the rifle. That was when a friend called to say he had found a one-day precision rifle course that was being offered in Atlanta. After a little research, I signed up with two other friends. 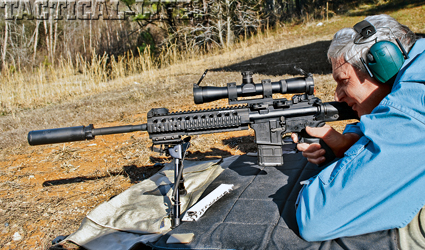 This S&W M&P15T was the only 5.56mm rifle in the APA class. The owner used a Leupold scope and SureFire suppressor.

Precision Applications was founded by Rob Sheppard, a former U.S. Marine Corps scout/sniper and municipal S.W.A.T. officer, who is currently with the Department of Homeland Security. While serving on active duty, Sheppard trained with American military SOCOM units as well as 2e Etranger 1e Compagnie of the French Foreign Legion, the British Royal Marines, Canadian Airborne, Royal Dutch Marines and the ROK Marines. After leaving the Corps, he served with a metro Atlanta agency where he worked in patrol, narcotics and served on the S.W.A.T. team as the lead sniper. His current position places him at the forefront of homeland security issues as well as serving as a firearms and tactics instructor for his agency. 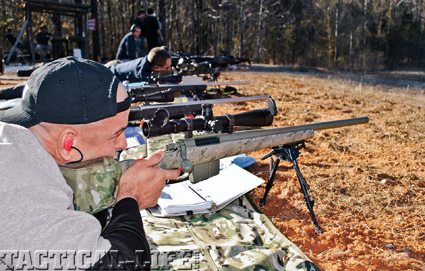 Two APA All-Purpose Rifles were on the line during the class, and both guns, equipped with McMillan stocks, consistently made MOA hits out to 400 yards.

DOPE Class
The one-day Precision Rifle course was held at a local range in southwest Atlanta. Eighteen students gathered to learn the art of the rifle. The day started out with two hours in the classroom, where Sheppard introduced the students to the basics. Prior to the course, Sheppard emailed each student with the course requirements and several articles that were mandatory homework. Those good students who did their homework found that it was time well spent. 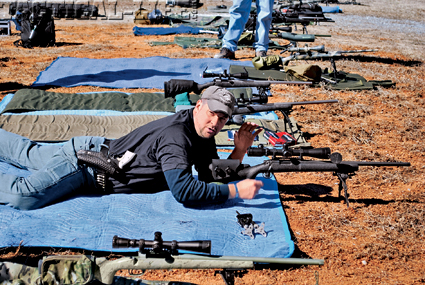 After covering the basics in the classroom, it was time to hit the range, where Sheppard demonstrated the skills needed to become a very proficient marksman.