0
SHARES
459
VIEWS
Share on FacebookShare on Twitter
The Scorpion EVO 3 A1 is highly accurate and brings a blistering rate of fire—over 1,100 rounds per minute. It’s a perfect choice for hostage rescue work, SWAT missions, special operations, and any engagement in tight spaces.

Ceska zbrojovka a.s. (CZ) is one of Europe’s most respected firearms manufacturers, and is perhaps best known for its history of producing a number of outstanding small arms for military use. Located in the Czech Republic, CZ has been the prime supplier of small arms to the Czech military since 1936.

Throughout its history, CZ has also been a major player in the international market for military and law enforcement firearms. One of the more intriguing firearms produced by CZ over the years is the Scorpion (sometimes spelled “Skorpion”) family of submachine guns. The newest generation of this family is the CZ Scorpion EVO 3 A1. First introduced in 2009, the CZ Scorpion EVO 3 is a compact, lightweight submachine gun that offers many exceptional features that make it an outstanding choice for military and law enforcement operators.

Scorpion Legacy
CZ developed the Scorpion EVO 3 to serve as a 21st century replacement for the older generations of the Scorpion and other dated submachine gun designs. The original Scorpion, officially known in Czech service as the “7.65mm vzor 61 Skorpion,” was developed at the request of the Czechoslovak Ministry of Interior in the late 1950s. The Ministry of the Interior, which was responsible for domestic law enforcement functions, needed a very light and small submachine gun chambered to fire the 7.65x17mm Browning SR (.32 ACP) cartridge. While many would question this caliber choice today, it must be remembered that 7.65mm Browning was the dominate caliber used by police forces throughout Europe at that time. 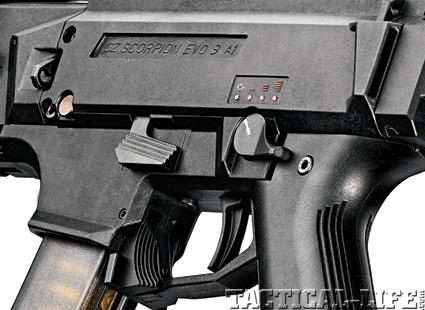 CZ also designed the mag release to be ambi. Located forward of the triggerguard, operators can easily swap out polymer mags to get back in action quickly.

This first generation of the Scorpion was officially adopted in 1961 as the “vzor 61 Skorpion” (Model 61 Scorpion). The Scorpion went on to be used by the security services and military forces of several nations, especially among elite special operations troops and paratroopers. Initially manufactured from1962 to 1966, the original Scorpion went on to be manufactured in later batches in periods from 1973 to 1976, 1978 to 1979, and finally in small quantities from 1992 to 1994. In total, the number manufactured was just over 200,000 units.

By the late 1980s, the 7.65mm Browning cartridge was largely displaced as the common police cartridge in Europe by 9x19mm in the West and the 9x18mm Makarov cartridge in the East. Due to this reason, the second generation CZ Scorpion 9mm was developed in the late 1990s. This model differed from the Model 61 in caliber, furniture and the addition of a front mounting rail. The grip and stock were made out of polymer instead of wood, although the older type of folding metal stock was also used. The mounting rail under the front part of the receiver was designed to accommodate a foregrip, a flashlight or an aiming laser. Low-rate production for the second generation Scorpion was launched in 2003. 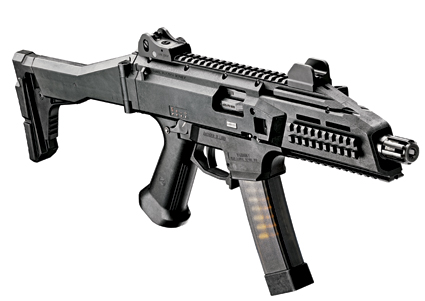 Highly accurate, lightweight and chambered for 9mm—the cutting-edge CZ Scorpion EVO 3 A1 is a powerhouse submachine gun designed for mobility and CQB operations. It’s lighter than a rifle, yet more powerful and accurate than a handgun.

Gun Details
The newest member of this legendary family of submachine guns is the CZ Scorpion EVO 3 A1. Since this model is the third evolution of the Scorpion to be manufactured by CZ, it has been given the designation EVO 3. The A1 portion of the model designation denotes that this is the first production variant, since there is always the possibility of future variants in other configurations. After a period of refinement, the new submachine gun was formally introduced in 2009 as the CZ Scorpion EVO 3.

As with the earlier incarnations of the Scorpion family, the EVO 3 is intended to fulfill the role of a personal defense weapon (PDW) as well as a weapon for military and law enforcement special applications. It is cambered to fire the universally available 9mm cartridge. From a marketing perspective, this makes a great deal of sense because 9mm is by far the most common pistol and submachine gun cartridge used by defense and security forces around the world. The 9mm is also a NATO-standardized service caliber, allowing the Scorpion EVO 3 to be offered to the Armed Forces of the Czech Republic and other NATO members.

EVO 3 Advantages
One of the advantages of using the Scorpion EVO 3 is that it is much lighter and compact when compared to a service rifle. It’s also much more accurate and versatile when compared to a handgun. It is a select-fire, blowback-operated weapon that enables the shooter to fire either single shots, a three-round burst, or on full-auto. A side-folding shoulder stock, which can be easily adjusted for length of pull, is standard. The weapon can be fired with the stock in the folded position or with the stock completely removed. According to the operator manual published by CZ, the Scorpion EVO 3 has an effective range of up to 250 meters when fired from the shoulder and an effective range of 50 meters when fired in the handheld position with the stock folded or removed. 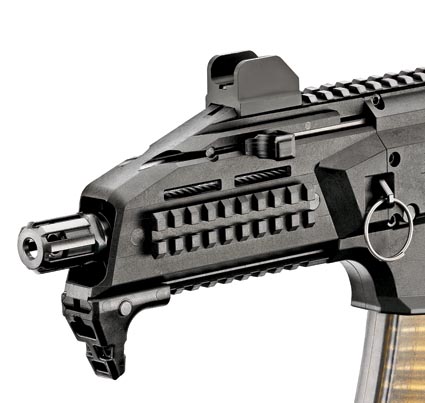 Along with the Picatinny rail on top, the Scorpion EVO 3 has additional rails located forward at the 3, 6, and 9 o’clock positions.

The Scorpion EVO 3 A1 comes with a Mil-Std-1913 accessory rail interface on top of the receiver, allowing it to accept various optical sighting devices as well as detachable factory iron sights. Additional Picatinny accessory rails are located forward at the three, six, and nine o’clock positions in order to accommodate aiming lasers, flashlights, forward grips and other accessories. The muzzle is designed to accommodate a quick attach/detach suppressor in situations when stealth is required. As part of their customer support, CZ can procure and integrate a full range of factory and aftermarket accessories on the Scorpion EVO 3 at the request of customers.

Users will note that the Scorpion EVO 3 is very ergonomic and features a user-adjustable pistol grip and shoulder stock. Users can also change the charging handle to either the left or right side without tools in a matter of seconds. An ambidextrous selector switch is located just above the pistol grip, while the ambidextrous magazine release is located just forward of the triggerguard. The submachine gun is supplied with polymer double-column magazines that come in either a 20- or 30-round capacity. The polymer magazine body is translucent, allowing the operator to quickly view how many cartridges remain. When the last cartridge has been fired from the magazine, the slide is locked open. Field stripping is facilitated by the removal of one disassembly pin, and the weapon can be field stripped and reassembled in a matter of seconds. 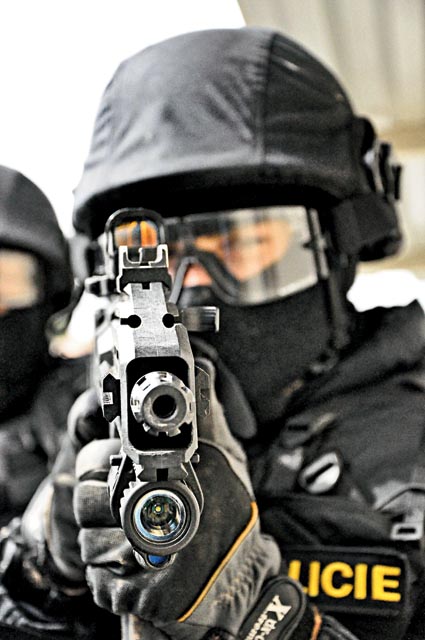 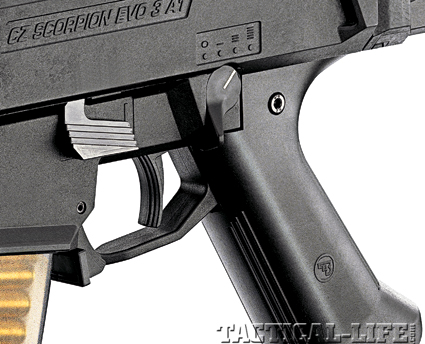 An ambi selector switch, just above the pistol grip and within easy reach, allows it to fire either single shots, three-round bursts, or full-auto.

Final Notes
Due to its light weight and compact size, the Scorpion EVO 3 is practical for an operator to carry without being overloaded. It is also ideal for deployment and use in confined spaces. This is an important factor when conducting operations from vehicles, performing helicopter insertions, and during parachute operations. These same characteristics also make the Scorpion EVO 3 a good choice for operators involved in VIP close protection and other security details. The reported high level of accuracy of the Scorpion EVO 3 also makes it a good choice for hostage rescue tasks. Military-specific roles for the Scorpion EVO 3 include its use as a personal defense weapon by vehicle crewman and by aircrew. Airborne and special operations forces can use the Scorpion EVO 3 for a variety of direct-action missions. It is also ideal for close-quarters combat in urban settings and for aboard ships by maritime forces.