by Jay Collins
in Guns, Handguns
0

“The Scorpion…is loaded with a plethora of advanced features and a good bit of history.”

Anyone who lives in a dry, desert-like environment has at one time or another seen a scorpion. These small, multi-legged, venomous creatures can deliver a heck of a sting. As such, it seems difficult to come up with a better name for a submachine gun than that, which is exactly what CZ has done.

The CZ Scorpion EVO 3 S1 Pistol is merely the civilian-legal version of this weapon available to American shooters. The differences between the full-auto version and this one are limited, and buyers will get the full benefits of the original design in the pistol version. The Scorpion is a 9mm, semi-auto, blowback-operated handgun that is loaded with a plethora of advanced features and a good bit of history. 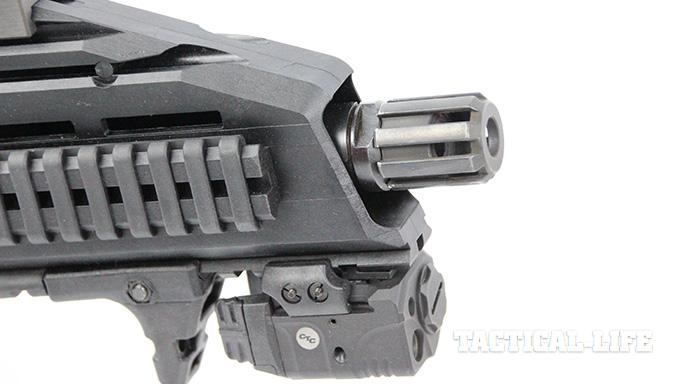 CZ started in the turbulent period prior to World War II in response to growing German nationalism and expansionism. After the war, Czechoslovakia ended up on the wrong side of the Iron Curtain and became a Soviet satellite state. It was during this period that some of the most interesting arms development occurred at the company, including the roller-locked semi-auto CZ 52 pistol, the SA vz. 58, the famed high-capacity 9mm CZ 75 semi-auto pistol and the Skorpion vz. 61 submachine gun.

This original Skorpion was in production from 1961 to 1979 and was chambered in .32 ACP, which was considered a suitable law enforcement cartridge in many European countries. It used 10- or 20-round magazines. The gun was adopted for military use by several countries and served as a sidearm for some rear echelon personnel as well as some in special operations. Variants were chambered in .380 ACP as well as 9mm Luger and 9mm Makarov. Both the original Skorpion and the modern Scorpion share select-fire blowback operation and fire from the closed-bolt position. Both also have folding stocks, with the former featuring a top-folding wire stock and the latter offering a side-folding polymer stock.

The modern Scorpion is still made in the same CZ factory in what is now the Czech Republic, but it did not start there. The polymer Scorpion’s design traces its roots back to 2002 in neighboring Slovakia, where it was developed for CZ by a small design firm named Laugo. Introduced to CZ’s standard production in 2009, it has seen a handful of improvements over the years, from materials upgrades to ergonomic modifications.

The CZ Scorpion EVO 3 S1 Pistol has a receiver and trigger group assembly made from tough polymer. The threaded, 7.72-inch, cold-hammer-forged barrel features a removable flash suppressor that seems hardly necessary in the 9mm chambering, but it does protect the threads. Aftermarket suppressor adaptors are available. Along the bottom and sides of the receiver there are 4-inch lengths of Picatinny rail for conveniently mounting accessories.

Along the top of the receiver there are 11 inches of Picatinny rail for installing magnified or red-dot sights. Standard and fully adjustable low-profile diopter sights are included and can be easily removed. The rear sight features four easily changeable aperture settings to satisfy user preference. The rakish design element at the top front of the receiver certainly gives the Scorpion pistol a more futuristic look, but extending the receiver further would have provided a longer sight plane and more rail space on top while sacrificing almost nothing in terms of added weight or space.

All of the controls are similarly constructed from polymer and feature many innovative design elements. The paddle-style safety selector is ambidextrous and easy to reach and use without having to adjust your hand position. The paddle-style magazine release is also ambidextrous and can be easily activated with the trigger finger by pushing it forward. It is somewhat similar to an AK magazine release, except that the magazine will drop free with no effort.

The small, curved polymer charging handle is installed on the top-left side of the receiver and just forward of the magazine, similar to an HK MP5. Likewise, it’s non-reciprocating and features a locking tab to keep the bolt open. It is, however, reversible and can be installed on the right side of the receiver for left-handed operation. It can also be used to release the bolt, which stays to the rear after the last shot. Alternatively, the operator can use the left-side bolt catch/bolt release lever, which can also be engaged with the left hand’s thumb when inserting a magazine.

The pistol grip itself is as distinct as the rest of the gun. While it remains fairly smooth along the sides, it does have vertical grooves and a noticeably protuberant palm swell at the bottom. Most interestingly, however, is that the grip can be loosened with an Allen wrench; it offers about an inch of adjustment to move the hand farther from or closer to the trigger and to adjust for the user’s hand size.

On the full-auto version there is an adjustable folding stock, but not so on the pistol version, which instead features a simple end cap. However, no doubt predicting demand, CZ also sells a separate aluminum end cap with an AR-style buffer tube extension ideally suited for installing an aftermarket arm stabilizing brace for added stability while shooting. Given the current legal issues surrounding the use of the arm brace, I opted for a different device to aid in shooter comfort, the Sterling Arsenal Pistol Receiver Extension Sleeve (SAR-PRES).

RELATED STORY: Taking Down a Backcountry Bear with the CZ 550 Sonoran Rifle

Developed and installed by Sterling Arsenal, the PRES is precision milled from a solid, high-density polymer sleeve that is securely and permanently press fit to a KAK Industry AR receiver extension. This allows the connection of a Command Arms Accessories (CAA) Cheek Rest Saddle, which wraps around the PRES and is connected with a polymer cross bar at the rear of the assembly. ATF Firearm Technology Branch issued Letter 3311/2011-281 indicating that the saddle, when used as a cheekrest, is not a stock since it is not positioned against the shoulder and therefore does not transform a pistol into a short-barreled rifle. In practice, it does allow for a stable cheekrest and more accurate and comfortable operation.

The SAR-PRES also includes a folding adaptor at the receiver module that enables the PRES assembly to fold like the original stock for the subgun. It may be possible to register the Scorpion pistol as an SBR, however, and then install an original folding stock. The Scorpion includes two translucent 20-round magazines, but 30-round magazines are also available. The pistol is currently only available in 9mm. Could a .40 be in the works? Only time will tell.

With the PRES cheekrest adapter, an empty 30-round magazine and the Crimson Trace Rail Master Pro installed, the pistol tips the scales at 6.5 pounds, while it weighs only 5 pounds when completely stripped.

The safety selector does have a slight tendency to the hit the third knuckle of the shooting hand, especially with a high grip. Shooters who experience any discomfort as a result could wear gloves or adopt a slightly lower hold on the pistol grip. Speaking of the grip, I enhanced its feel by applying adhesive overlay grips from TALON Grips. The easy-to-install kit for the EVO 3 is available online for $18.

During reliability and accuracy testing, all of the ammunition functioned flawlessly. However, the 124-grain jacketed hollow point load had a tendency to hang up while feeding the first round from the magazine. Accuracy at 25 yards from a benchrest while using the iron sights was also impressive.

For range drills, I installed the Crimson Trace Rail Master Pro Universal Red Laser Sight and Tactical Light on the under-barrel accessory rail. This is a great unit for low-light shooting and cloudy days. The red laser really stands out, and when you need it, you have access to a 100-lumen tactical light with constant-on and strobe settings. The whole unit is housed in a solid and water-resistant polymer/aluminum body.

CZ USA is offering shooters a great tactical pistol based off of a next-gen submachine gun and loaded with practical features. The CZ Scorpion EVO 3 S1 would also make an excellent trunk gun because it uses easy-to-find and low-recoiling pistol ammo, yet it has the ability to easily and accurately engage targets at longer distances.