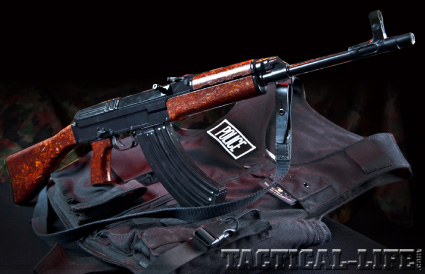 The Sampol vz. or 1958 tactical carbine, also known as the Sa vz. 58 or just simply vz. 58, traces its lineage to the height of the Cold War when NATO, led by the USA faced the Warsaw Pact, which was led by the now defunct Soviet Union across the border that separated Eastern Europe from the West. During that period of history, the vast majority of Warsaw Pact countries were armed with AK 47s. Although one member of the Warsaw Pact, Czechoslovakia, now the Czech Republic, marched to the tune of a slightly different drummer than the rest of the Soviet Union’s prisoner states and developed its own tactical carbine rather than adopting the AK 47. Although the vz. 58 bears a superficial resemblance to the AK, it is a completely different rifle.

In 1956, Konstrukta Brno began the development of the vz. 58 in the 7.62x39mm cartridge. Like NATO, ammo interchangeability was just as important for the Warsaw Pact, so the Soviets wanted to keep the 7.62x39mm as the standard Warsaw Pact caliber. The vz. 58 entered service in 1958; the original had select fire in either semi or fully automatic. It was also made in three versions: the standard infantry vz. 58 that is externally identical to our test rifle, a folding stock airborne version and an Infantry Infrared version that was clearly intended for low light sniper use as indicated by its infrared night sight, bipod and conical flash suppressor. Standard and folding stock versions are imported by Czechpoint in a number of versions, but the Infantry Infrared isn’t one of them.

Between 1958 and the last year of its official production in 1984, over 920,000 vz. 58s were manufactured. The carbine was adopted by more than 20 nations around the globe, including Cuba, Dominican Republic, India, Indonesia, Iraq, Slovakia, Sudan and others. While the original vz. 58s was not made in nearly the same numbers as AKs, it should be remembered that the Soviet Union literally gave their AKs to its client states at no cost, while those that wanted vz. 58s had to buy them. Originally made by Ceska Zbrojovka, the current vz. 58 Czechpoint versions are made by D-Technik in the Czech Republic.