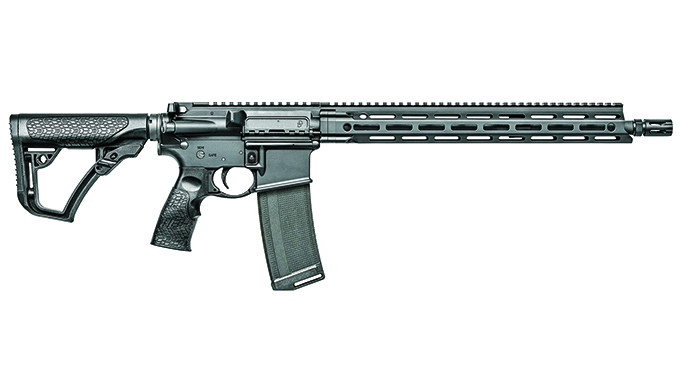 1 of 7
Daniel Defense DDM4V7
Daniel Defense DDM4V7: The DDM4V7 marks Daniel Defense’s first offering with an M-LOK-compatible handguard. the 15-inch, free-floating MFR XS handguard offers a long Picatinny on top, and M-LOK slots run the lengths of the sides and bottom. Within the 6061-T6 handguard is a 16-inch, cold-hammer-forged barrel and a mid-length gas system. The barrel is capped with an enhanced flash suppressor, and the gas system should provide for a smooth shooting experience with less recoil. The flattop upper receiver has M4 feed ramps for reliability, and the lower features an H-buffer, a six-position buffer tube and Daniel Defense’s buttstock and pistol grip. The rifle also ships with one of the company’s new 30-round magazines. If you’re looking to up the ante a bit, Daniel Defense offers LW and Pro versions of the DDM4V7. The former comes with a lightweight 16-inch barrel while the latter features an 18-inch S2W (Strength to Weight) barrel for 3-Gun competitions. The Pro also comes with a Geissele Super Dynamic 3-Gun trigger for super-fast split times and precise follow-up shots. 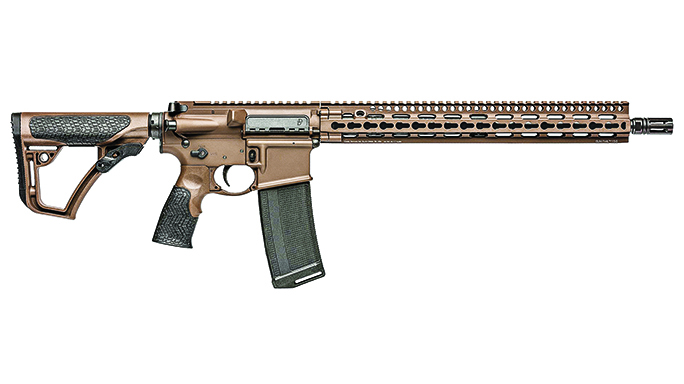 2 of 7
Daniel Defense DDM4V11 300
Daniel Defense DDM4V11 300: Based on the popular V9 series, the DDM4V11 line was designed to offer fast-handling carbines that make use of the KeyMod attachment system. The base model uses a 16-inch, cold-hammer-forged, government-profile barrel and a 15-inch SLiM (Slim Lightweight Modular) handguard with KeyMod slots along the sides and bottom. Several variants are available in this line, including the LW, which uses a lightweight barrel, and the SLW, which comes with a 14.5-inch barrel, an extended flash suppressor and a 12-inch handguard. And this model lives up to its name by only weighing 6.28 pounds unloaded. There is also a Pro model in this line with an 18-inch S2W barrel and a Geissele trigger. A number of finish options are available, too. The standard DDM4V11 is available in matte black, Daniel Defense’s grey Tornado Cerakote, Kryptek Typhon and light brown Mil-Spec+. The DDM4V11SLW is available in black, Tornado and Mil-Spec+. But one of the newest offerings in this line is the DDM4V11 300, which is chambered for the 300 Blackout and comes with a durable, light brown Mil-Spec+ finish. Designed for use with either super- or subsonic ammunition, this carbine is ready to roll with or without a sound suppressor. This makes it extremely versatile for covert operations, hunting and self-defense. 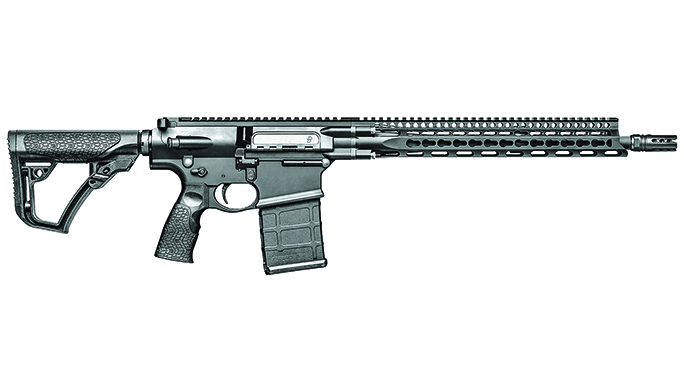 3 of 7
Daniel Defense DD5V1
Daniel Defense DD5V1: Big-bore ARs have become incredibly popular lately, but Daniel Defense’s take is a little different than the rest. The DD5V1 is a workhorse built to harness the .308 Wincheser/7.62mm NATO. It uses an innovative four-bolt system to connect the handguard to the upper receiver while allowing the 16-inch, cold-hammer-forged S2W barrel to float freely for enhanced accuracy. More upgrades include Daniel Defense’s Superior Suppressor Device (SSD) on the muzzle, an improved bolt carrier group, ambidextrous controls, a modular charging handle and a Geissele SSA two-stage trigger for smooth, rapid-fire shooting. Also, weighing 8.3 pounds unloaded, the DD5V1 is also one of the lightest .308 ARs around. For those looking to head out into the backcountry to bag game, the Ambush .308 swaps in an 18-inch, cold-hammer-forged barrel with an extended SSD. Just like the DD5V1, it uses an optimized bolt carrier group for dependable feeding. The barrel, buttstock, grip and controls are matte black, but the receivers and handguard have a Kryptek Highlander camo finish thanks to water-transfer printing. In other words, it’s ready to blend into the wilds. Finally, the Ambush .308 is equipped with the proven Geissele SSA two-stage trigger. 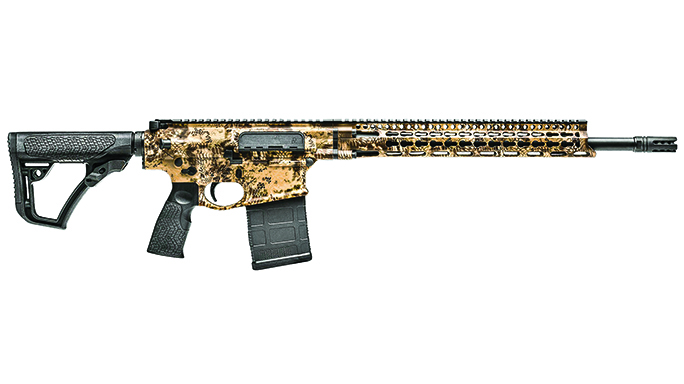 4 of 7
Daniel Defense Ambush
Daniel Defense Ambush: For those looking to head out into the backcountry to bag game, the Ambush .308 swaps in an 18-inch, cold-hammer-forged barrel with an extended SSD. Just like the DD5V1, it uses an optimized bolt carrier group for dependable feeding. The barrel, buttstock, grip and controls are matte black, but the receivers and handguard have a Kryptek Highlander camo finish thanks to water-transfer printing. In other words, it’s ready to blend into the wilds. Finally, the Ambush .308 is equipped with the proven Geissele SSA two-stage trigger. 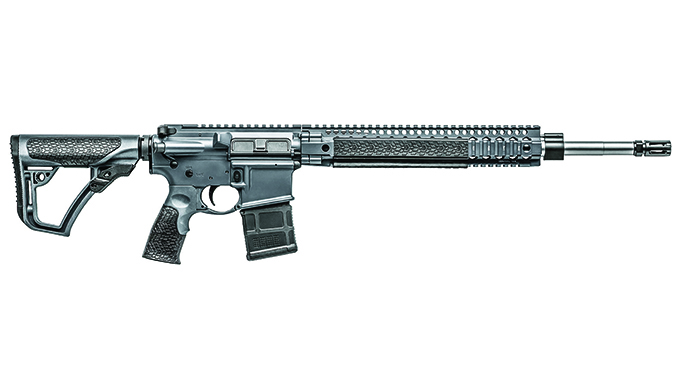 5 of 7
Daniel Defense MK12
Daniel Defense MK12: If you’re looking for more accuracy in a 5.56mm AR, the MK12 has you covered. This rifle was designed to mimic the U.S. military Special-Purpose Rifle (SPR) concept and provide long-range precision with increased firepower. To that end, the MK12 features an 18-inch, stainless steel barrel with a chamber created to offer the most precise bore alignment possible. The MK12 also uses a rifle-length gas system and a gas block that is built to Naval Surface Warfare Center-Crane Division specifications from 416 stainless steel with a black oxide coating. The handguard is a 12-inch DDM4 quad-rail system that is extra rigid and offers plenty of space for mission-critical accessories. Rounding out the package is a Geissele two-stage SSA trigger and a matte black or Tornado Cerakote finish. 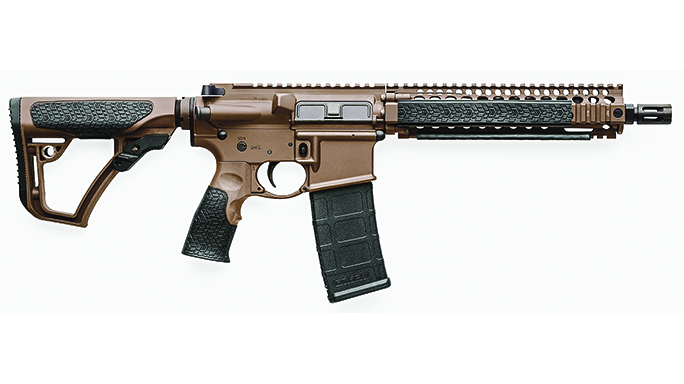 6 of 7
Daniel Defense MK18
Daniel Defense MK18: At the opposite end of the spectrum, the MK18—designed after the model used by our elite USSOCOM operators—is designed for close-quarters operations. The 10.3-inch barrel is perfect for entry missions without sacrificing too much when it comes to short-range terminal ballistics for the 5.56mm NATO. Surrounding the barrel and gas system is Daniel Defense’s RIS II rail system, which has withstood rigorous testing by USSOCOM and is installed on over 15,000 military rifles currently in use. This handguard comes with Santoprene rail covers that are heat resistant to 300 degrees Fahrenheit and have texturing matching that found on the buttstock and pistol grip. A few variants of the MK18 are available, including the standard Mil-Spec+ carbine, pistol models and factory SBRs with Law Tactical folding stock adapters installed. 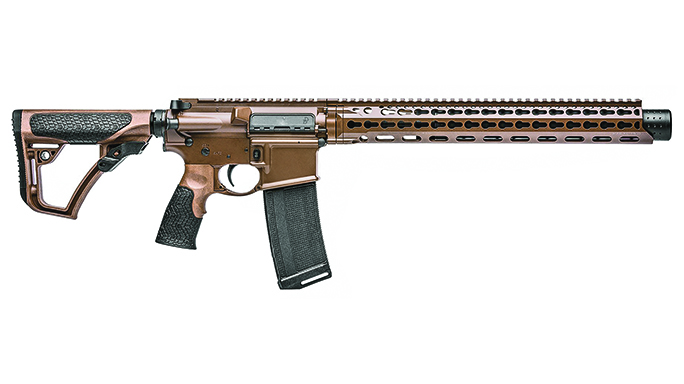 7 of 7
Daniel Defense DDM4ISR
Daniel Defense DDM4ISR: If you are looking for a short 300 Blackout carbine to use with a sound suppressor but only incur one tax stamp, the DDM4ISR (Integrally Suppressed Rifle) is just about perfect for you. With this setup, the sound suppressor is permanently attached to the 9-inch barrel for a total length of 18 inches. Thus, instead of two tax stamps for an SBR and suppressor, you’ll just have to get one for the suppressor. The barrel itself is cold-hammer forged using Daniel Defense’s proprietary S2W contour. A 15-inch MFR XL handguard covers most of the suppressor, providing plenty of space to establish a firm support-hand grip, and dozens of KeyMod slots make it easy to attach any accessory you might need. The receivers and handguard are coated in Mil-Spec+ Cerakote, and the rifle comes with a matching buttstock and pistol grip. The controls, buffer tube, suppressed barrel, Daniel Defense magazine and Soft-Touch overmolding are all black, providing an attractive contrast. In short, this rifle is truly lightweight, maneuverable and quiet with either sub- or supersonic ammunition. 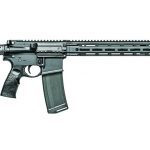 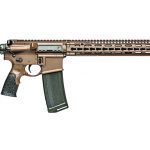 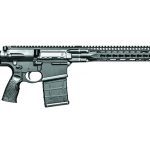 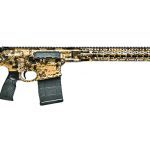 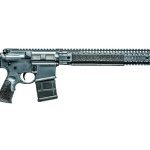 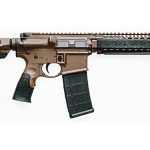 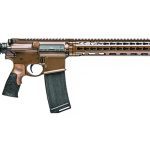 Committed to simplicity and reliability, Daniel Defense’s rifles are legendary for their ability to keep operating under the harshest conditions. That’s why many shooters have chosen Daniel Defense rifles as their “go-to” ARs—they know these guns will work.

All Daniel Defense ARs use upper and lower receivers machined from forged 7075-T6 aluminum to provide the most strength without being too heavy. The barrels are cold-hammer forged, chrome lined and phosphated per military specifications. The gas blocks, made of steel, are securely pinned in place. The M16-profile bolt carrier groups are hardened with properly staked gas keys. As for furniture, Daniel Defense recently started offering its own buttstocks and pistol grips with comfortable Soft-Touch overmolding, and the company’s handguards are still some of the strongest on the market.

Every rifle is built to last and work in any environment, and the company maintains that level of quality as it continues to innovate. To that end, let’s look at some of the newest models from Daniel Defense.

This article was originally published in ‘Black Guns’ 2017. For information on how to subscribe, visit outdoorgroupstore.com 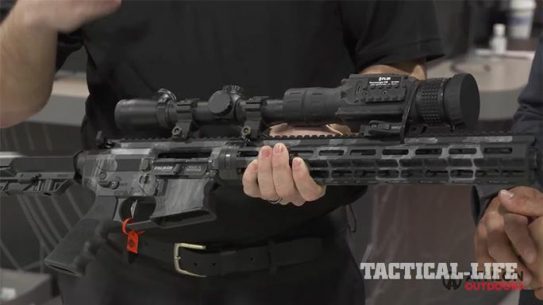