Accurate and packing the extra punch of a .30-caliber, the Daniel Defense M4 V5 300 BLK carries more energy to the target and can be operated almost silently with subsonic ammunition and a suppressor. Shown with a Browe optic.

AR-15s are some of the most versatile guns ever designed and lend themselves well to a variety of roles, from assaulting an enemy position to close-quarter structure clearing. They also can be fitted with sound suppressors, which are very useful in not only protecting the hearing of the shooter and those close by—especially if in the confines of a structure where sound bounces off of walls instead of dissipating into the atmosphere—but also to mask the location of the operator so that the enemy will have a more difficult time finding him. However, the 5.56mm NATO round can remain supersonic for 900 yards or more and cause a sonic crack for the entire distance, alerting an enemy to the presence of a shooter.

To maintain stealth, deliver more foot-pounds of energy (fpe) on target, penetrate barriers better than the 5.56mm round and still have the benefits of the AR-style weapon system, the 300 AAC Blackout cartridge was developed. The .30-caliber round was specifically designed around the AR platform, with a different barrel being the only required modification. Recognizing the benefits of the new cartridge, Daniel Defense of Black Creek, Ga., has chambered its successful M4 V-series carbines in the new round. The M4 V5 received for testing is a well-executed AR-15 with a free-floated barrel and a quad-rail forend that is more than 12 inches long, providing lots of room for optics and accessories.

Since the AR’s introduction in the 1960s, there has been a great deal of controversy about the so-called “varmint round” that the military chose. Derided as underpowered for military use, critics have long called for a .30-caliber alternative that would carry more energy to the target.

Many have suggested that the Russian 7.62x39mm cartridge, which is fired by the AK-47, is a better choice, and that the 7.62mm NATO round would be even better. However, the 7.62mm NATO round is too long for the AR-15’s receiver and the Russian cartridge’s taper makes it incompatible with the AR-type magazine and magazine well. Additionally, the taper induces unwanted stress on the bolt. Therefore, an alternative was needed.

J.D. Jones of SSK Industries designed the 300 Whisper and in 1992 copyrighted the name. His work helped prove the concept of a .30-caliber round based on the same case used to develop the 5.56mm cartridge; but being a copyrighted proprietary round, it was not eligible for adoption by the Sporting Arms and Ammunition Manufacturers’ Institute (SAAMI). Another solution developed by Advanced Armament Corp. is the 300 AAC Blackout, which was submitted to SAAMI and approved in January 2011. The new round, also referred to as the 300 BLK, then became a standard chambering that any manufacturer could produce. At that point, interest increased and now several ammunition manufacturers are committed to making 300 BLK ammunition. 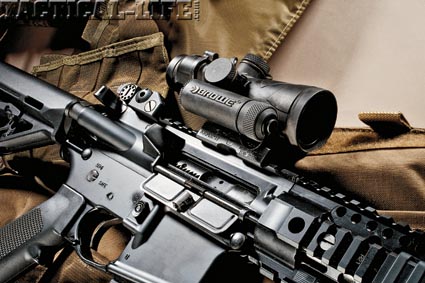 Daniel Defense’s M4 V5 300 BLK cartridge was designed to be fired out of an AR without an increase in size while still utilizing a standard bolt.

Currently, there is some disagreement among designers and manufacturers as to the compatibility of .300 Whisper and 300 BLK cartridges and chambers, so it is best to follow the ammunition and firearm manufacturers’ instructions about shooting Whisper rounds in BLK chambers and vice versa. However, Hornady offers 300 Whisper ammunition in its catalog and states that the cartridge is safe to shoot in guns chambered for 300 BLK.

There is a wide variety of .30-caliber bullets and they have much higher ballistic coefficients than the Russian 7.62x39mm projectile, allowing the 300 BLK to retain velocity better than the AK-47 round and deliver more energy at longer distances. And, as an added benefit, the 300 BLK recoils less.

Free recoil energy is a pretty good measure of kick— it’s a function of velocity and the weight of the gun, bullet and powder charge. Applying a little math to the problem, and assuming the gun weighs 7 pounds, which is exactly what the Daniel Defense M4 V5 weighs, a 125-grain 300 BLK load creates 5.39 foot-pounds of free recoil energy compared to 7.2 fpe for the 123-grain Russian round. For comparison, the 110-grain 300 BLK generates 5.19 fpe while the MK262 77-grain 5.56mm NATO round produces 4.29 fpe. However, because of lower velocity, a heavier subsonic 220-grain 300 BLK round actually produces only 3.23 foot-pounds of recoil energy, making it very easy to get the gun back on target for follow-up shots.

Using Oehler Research’s Ballistic Explorer computer program, some interesting comparisons between the 300 BLK and other cartridges are possible. At 300 yards, a reasonable intermediate range, the drop of a 123-grain Russian round and the 125-grain 300 BLK are both about 37 inches, but the velocity of the 300 BLK is about 1,694 feet per second (fps) and the energy is 797 fpe compared to about 1,553 fps and 659 fpe. So, the 300 BLK, because of its superior ballistic coefficient, beats the Russian round. 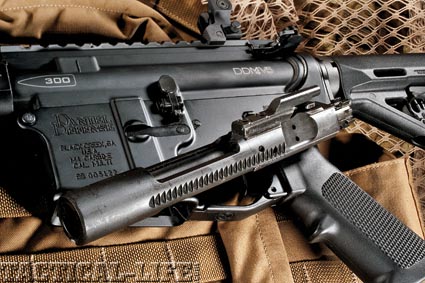 The bolt carrier group is built to military specifications, which includes a chrome-lined carrier and gas key. The gas key is also staked.

Gun Details
To take advantage of the 300 BLK’s attributes, a suitable bullet launcher is needed and the Daniel Defense M4 V5 solution qualifies. Except for those made of polymer, almost every part of this gun, from the barrel and receivers is made by Daniel Defense. That is fairly unusual for an AR manufacturer, since many are parts assemblers that buy components from other companies. Daniel Defense actually starts with metal stock and can therefore control the whole manufacturing process.

The M4 V5 is a flattop AR with a 16-inch barrel that lacks the M203 contour that is so common, but that is useless for anyone not using an M203 grenade launcher. The cold-hammer-forged, chrome-moly-vanadium barrel with a 1-in-8-inch twist is finished with an evenly applied nitride bath treatment that is very hard, resistant to corrosion and eliminates the need for chrome lining. It is magnetic-particle inspected, pressure tested and fitted with a carbine-length gas system that is connected to the barrel by a pinned low-profile gas block. A mid-length gas system would not work because of the diminished gas volume generated by the smaller-capacity 300 BLK cartridge.

At the end of the barrel is a Daniel Defense flash suppressor that is similar in appearance to an A2-style birdcage flash suppressor. Surrounding the barrel is Daniel Defense’s Omega X Rail 12.0, which provides about 12 inches of uninterrupted Picatinny rail at 12, 3, 6 and 9 o’clock positions for the mounting of optics and other accessories. The handguard is indexed to the A3-style flattop upper receiver so that night-vision equipment can be mounted in the same plane as whatever optic may be mounted on the receiver. Three rubberized ladder-style rail covers were provided to protect the Picatinny rails that were not in use. A Daniel Defense vertical foregrip was also provided. 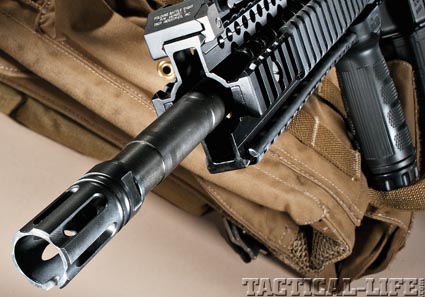 Daniel Defense finishes the 16-inch barrel with their flash suppressor, which looks similar to the GI A2-style birdcage style, but is slightly different.

The upper and lower receivers are built to military specifications and the upper has the feed-enhancing ramp cuts found on M4 Carbines. Both receivers were evenly finished in a black hardcoat anodizing that matched the barrel’s finish. The lower receiver has all the AR controls right where they should be and all worked positively, including the magazine release, which allowed the magazine to drop freely from the very widely beveled magazine well when pressed. The gun is fitted with an A2-style pistol grip and the triggerguard is the Magpul Enhanced version, which provides more room for a gloved finger. It also covers the annoying gap between the grip and the standard triggerguard that can chew up the operator’s hand when supporting the gun during reloads.

The single-stage trigger broke cleanly at a hair more than 7 pounds after a bit of creep. The receiver extension supported a six-position adjustable Magpul MOE buttstock with a rubberized buttpad to keep it from slipping off the operator’s shoulder under recoil.

Daniel Defense says the bolt carrier group is built to military specifications, meaning that, among other things, the bolt carrier and gas key are hard-chrome-lined and magnetic-particle inspected. The gas key appeared to be properly staked to prevent loosening during use, which could stop the show, and the extractor was equipped with a black insert and O-ring to enhance its ability to grip the cartridge rim. Additionally, Daniel Defense pressure tests each bolt and shot-peens each extractor. Not all manufactures shot-peen parts. 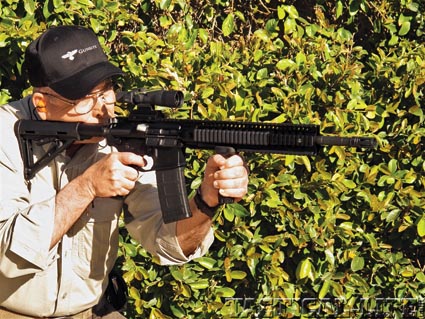 Range Time
To test accuracy, I attached a Schmidt & Bender 3-12×50 PMII scope in the superb LaRue Tactical LT158-34 QD mount. This is the same high-quality scope the Marines adopted as the scout/sniper day scope. Targets were set at 100 yards. The best five-round group of the test was 0.65 inches, delivered by Right 2 Bear Ammo’s 300 BLK 110-grain V-MAX. Interestingly, the same company’s subsonic 208-grain A-MAX posted the second best group of 1.24 inches. Overall, the gun delivered pretty good accuracy on average, with groups running about 1.5 to 2.5 inches, except for the Hornady 300 Whisper 208-grain A-MAX load, which ran about 4 inches.

Mounting a Trijicon ACOG sight for tactical drills, the gun performed very well, with recoil being only slightly more than a 5.56mm AR. The only problem arose with subsonic 208-grain loads, which failed to fully push the bolt far enough to the rear to strip the next round from the magazine. With a subsonic load, the amount of gas delivered to the action is much less than with a supersonic load and is not enough to cycle the bolt; however, Daniel Defense advises that the gun will cycle properly with a sound suppressor. Since I did not have a suppressor for testing, I cannot confirm it, but it makes sense. And with a suppressor, the full benefit of a subsonic load—near silence—is realized. This can be of huge benefit to the warfighter who must maintain stealth.

Final Notes
The 300 AAC Blackout is probably going to become much more common in the hands of the military, and perhaps the police, due to its potential for quiet operation and increased energy on target. And the Daniel Defense M4 V5 is likely to be a strong candidate for a suitable gun to fire it.