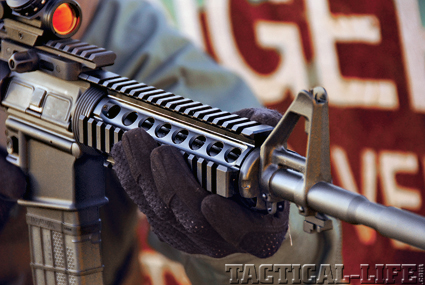 With so many manufacturers making ARs, it is sometimes difficult for a LE officer to find—on ever-limited dollars—the perfect AR for themselves. And in these economic times, the “perfect AR” for LEOs is the one that offers reliability at a price that doesn’t scare your wallet out of your pants.

The overwhelming majority of ARs offered on the market today are built from numerous companies all sourcing parts from only three or four primary manufacturers. And many of those companies are all selling ARs with their name on them, but almost all use the same parts made in the same place to build slight variations of essentially the same rifle. Many “AR manufacturers” are really “AR parts assemblers.” 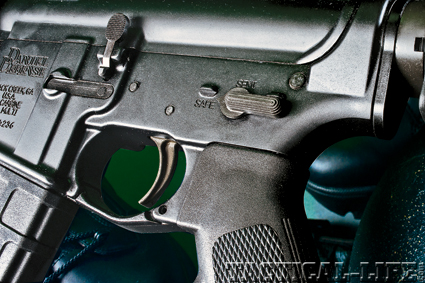 Daniel Defense not only obsessively makes the upper and lower receivers in-house for the EZ, they even make the tiny pins for the triggerguard.

When I consider spending my own money for an AR, I look first to companies who manufacture their own components. Any company that takes enough pride in their product to bring production in-house is a company that passes my initial selection to get my money. Parts assemblers are at the mercy of their suppliers when it comes to availability and quality control. While an AR might have “Company X” stamped on the side, that doesn’t mean they really make it.

A company like Daniel Defense, however, takes enough pride in ownership that they were willing to bring production of almost all components in-house to guarantee that they really are turning out a quality product that stands out against the competition. This is why I tell friends of mine that a Daniel Defense AR is an AR that they should own.

Daniel Defense makes their own barrels, upper receivers, lower receivers, receiver extensions, bolt carriers, bolts, carrier keys, gas tubes, etc. They even went so far as to produce their own lower parts kits composed of the trigger assembly and a bunch of tiny parts and pins. When a company is willing to produce their own pins for their rifles, it’s a safe bet that they’re obsessed with turning out a quality rifle. 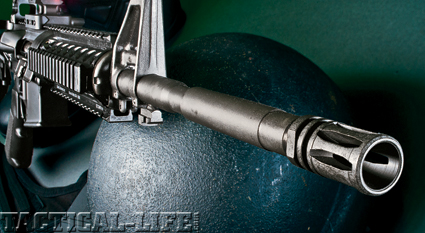 The AR shooting community is not without its idiosyncrasies. A lot of AR shooters tend to be in the younger demographic in the shooting community and many are veterans of Iraq, Afghanistan or both. Law enforcement officers are also well represented in the AR owners’ ranks. A lot of AR shooters are also new shooters with limited experience. Many frequent the plethora of internet gun forums to share their passion with like-minded shooters from around the world.

No matter who you are, the most important questions to ask yourself before buying a new AR are: “Whose rifle should I purchase and how am I going to use it?” We’re an opinionated bunch of shooters, so advice made available to anyone considering purchasing a new AR is often varied, earnest and sometimes contradictory. First, choose a company that makes as much of their rifle as possible. As mentioned above, the pride of ownership that a company like Daniel Defense takes to produce their gun in-house bodes well for prospective buyers. The next step is to carefully consider the intended use of the rifle. With the exception of extremely mission-specific uses, the overwhelming majority of shooters will be well served with choosing a rifle like the Daniel Defense M4 XV EZ. 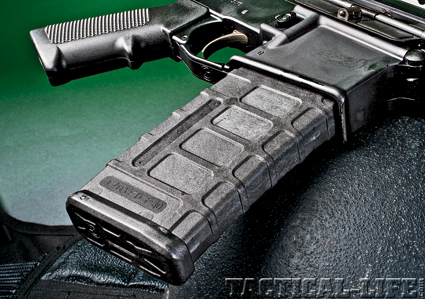 The beveled magazine well of the DDM4 EZ makes magazine changes a breeze. PMags dropped freely from the rifle tested.

Gun Details
Rifles are best kept simple, and the XV EZ is the epitome of a simple AR that addresses the varied needs of AR shooters very well. If you look at the M4 the military issues its troops, it looks almost exactly like the Daniel Defense M4 XV EZ. This type of rifle is an accepted standard because it provides the correct enhancements for serious use without becoming excessively accessorized. This is why this type of rifle is so frequently issued to soldiers and law enforcement officers. However, given the choice between anything I’ve ever been issued and the Daniel Defense rifle, I’d always choose the XV EZ.

The basic fighting carbine needs to be simple and robust. Fixed iron sights are an excellent choice and Daniel Defense provides some of the best in the business on their rifle. The fixed front sight post is fairly standard stuff, but Daniel Defense includes a Picatinny-mounted fixed rear that is easy to remove, rock-solid once mounted and provides the shooter everything they need in a rear sight without being cumbersome or excessive.

The Picatinny rail forend replaces the standard A2-style handguards. The forend on the XV EZ is Daniel Defense’s new EZ CAR 7.0 rail system that is a drop-in replacement and requires no modification of the original weapon. 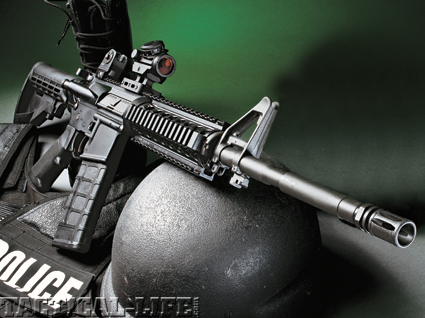 Picatinny rail forends are popular in the AR community and for good reason. A fighting rifle needs certain pieces of aftermarket equipment to function well, the two most critical being a sling and a weapon light. Slings are easy enough to mount on just about any rifle, but a weapon light can be problematic without a Picatinny rail forend. Daniel Defense’s EZ CAR 7.0 provides the shooter a place to easily mount a weapon light and leaves them plenty of flexibility in determining how they want to mount their sling as well. Should the shooter be so inclined, there is also enough space to attach a vertical foregrip or bipod.

Daniel Defense rifles feature other refinements that are extremely well thought out and beneficial to a shooter. The XV EZ comes with a beveled magazine well that makes reloads quick and easy. Magazine wells on ARs tend to be very large for competitive shooters or non-existent because the original military specifications didn’t call for one.

The flat, squared magazine well of a traditional AR means that you either get your magazine changes just right or you can try again. The beveled magazine well that Daniel Defense puts on its XV EZ looks like a traditional AR from the exterior upon first glance, but has a large opening that channels the magazine into the well. When we’re reloading our weapon, we’re usually in a hurry—the XV EZ’s beveled mag well will be a welcome addition every time you reload.

Daniel Defense also puts a Magpul MOE triggerguard on the XV EZ. It’s an angled polymer triggerguard that fills the gap left open between the pistol grip and standard triggerguards. After a few hundred rounds, that gap feels like a cheese grater on the firing hand’s middle finger and bloody blisters are sure to result. It’s little touches like this one that ensure comfortable extended range sessions. 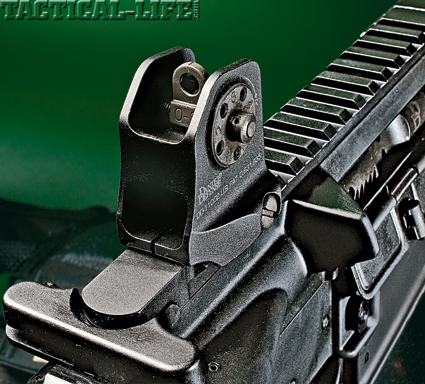 Daniel Defense ships one of their rear sights with the DDM4 EZ. It is an exceptional sight that is both unobtrusive and rugged.

Daniel Defense is one of the very few AR builders that also manufactures the barrels for their rifles. It’s hard to tell the difference between barrels by looking at them, but a key component of the Daniel Defense M4 XV EZ that bears some additional discussion is it’s cold-hammer-forged barrel.

The majority of rack-grade ARs sold feature button-rifled barrels. Many barrels come in two flavors: button-rifled and hammer-forged. Each of these barrels has its strengths and weaknesses.

Button-rifled barrels can be some of the most accurate barrels made or some of the most economical barrels made, depending on the manufacturer. Economics usually prevail in the AR market because it is saturated, so most AR barrels are made to hit a specific price point; accuracy and durability often take a backseat.

Hammer-forged barrels are difficult and expensive to manufacture, but they are by far the most robust barrels out there. A hammer-forged barrel starts its life as a squat 10-inch piece of steel (called a blank) with a hole drilled down its center. The blank is threaded over a piece of hardened steel (called a mandrel) that is the exact dimensions of the rifle’s bore. Big hammers then pound the blank onto and around the mandrel until the barrel is 16 inches long and has the appropriate contour. The process makes for a very dense barrel that is ideally suited to high-round-count carbine use.

Each barrel that Daniel Defense makes undergoes a stringent quality control process. While the techniques are dated, each barrel is pressure tested (meaning they fire a really hot cartridge through the barrel to see if it explodes) and magnetic particle tested (sprayed with magnetic dye to check for cracks). Daniel Defense exhibits a willingness to go to extremes to ensure that only flawless barrels get to market. 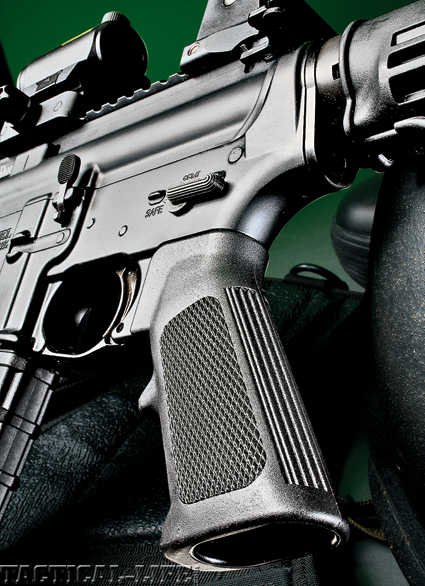 The DDM4 EZ ships with a standard A2-style pistol grip, as well as a Magpul MOE angled polymer triggerguard to protect the shooter’s fingers.

Range Time
Shooting the Daniel Defense M4 XV EZ went along much as I expected. The accuracy of the rifle was right on par for a non-free-floated AR, with accuracy for a five-shot group averaging 1.6 inches at 100 yards. The 1-in-7-inch barrel twist rate demonstrated an affinity for the heavier bullets and liked Hornady’s 75-grain TAP load the best. Five-shot groups for the Hornady averaged 1.4 inches.

Final Thoughts
Daniel Defense has created an ideal carbine for those seeking simplicity and efficiency in their rifle. While it appears to be nearly identical to the weapon issued to our troops overseas, the XV EZ has some critical refinements and improvements that make this carbine vastly preferable to the ones that are issued. The hammer-forged barrel gives this carbine an extended service life and the Picatinny forend provides enough rail space for a weapon light and sling mount without allowing extravagance. The beveled magazine well makes for quick reloads and the willingness of Daniel Defense to produce this entire rifle in-house demonstrates a commitment to provide only the best. For more information, call 866-554-4867 or visit danieldefense.com. 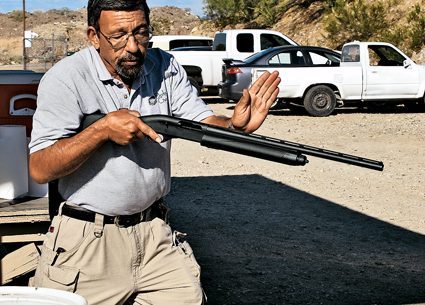 Tom Beckstrand photo With so many manufacturers making ARs, it is sometimes difficult for…