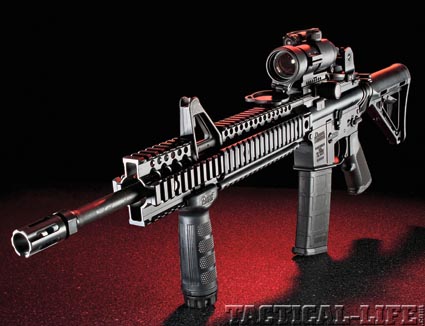 Weighing only 6.8 pounds empty, the Daniel Defense M4V1 Lightweight lives up to its name—and it’s still incredibly strong. Shown with an Aimpoint PRO.

Daniel Defense is committed to providing small arms solutions that are lighter, stronger and better. This philosophy is nothing more than a continuation of Daniel Defense founder Marty Daniel’s desire to greatly improve his personal M16 rifle. He could not buy what he wanted, so he designed and created what he needed. His creations were so good and sought after that the company became a supplier of AR-15 accessories to the U.S. military and consumers worldwide. Now, Daniel Defense offers complete rifles.

A lot of police departments select patrol rifles based on price. The same is true for civilians and even the military. Retail prices for mil-spec AR-15-type rifles are as varied as the weapon platform is adaptable—prices can range from about $600 to four times that much. Consumers, whether military, law enforcement or civilian, must decide what they can afford.

Being able to afford something is one thing, but getting what you need and what you can rely on is another. If you purchase an AR-15 to ride shotgun in your patrol car, it must work every time you need it, no matter the situation. It simply needs to be as indestructible as possible. Because Daniel Defense designs and builds their ARs with military service in mind, toughness is a priority. The last thing Daniel Defense wants to hear is that a soldier failed his mission because they failed to deliver a rugged rifle. So, Daniel Defense created a torture test just to prove the strength of their M4V1 carbine. 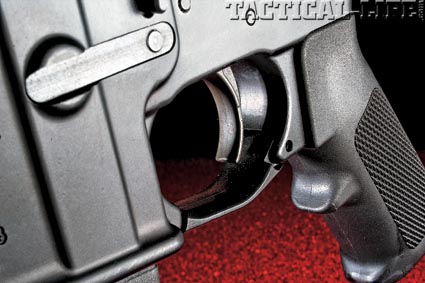 One of the many factors contributing to its accuracy, the M4V1 features a crisp, predictable trigger that broke at 6 pounds.

The test was broken down into six segments. First, Daniel Defense buried the M4V1, recovered it and made sure it ran. Then the rifle was submerged in water, removed, drained and fired. So far, so good. Part three was the shrapnel test. To simulate a shrapnel blast, Daniel Defense actually shot the test rifle with a 12-gauge shotgun loaded with #8 lead shot from a distance of 15 yards. After this brutal test, the rifle remained functional and accurate. If that weren’t enough, Daniel Defense launched the M4V1 onto a gravel road from a vehicle traveling 20 mph, and then ran it over with another vehicle going the same speed. Again, it still proved reliable and accurate when firing immediately afterward. Then came the blast test, where the rifle was slung on a steel target 5 feet away from 25 pounds of explosives. After the explosion, the rifle functioned reliably. Finally, the M4V1 was dropped from heights of 6, 30 and 100 feet. As with the previous tests, the rifle remained accurate and reliable. 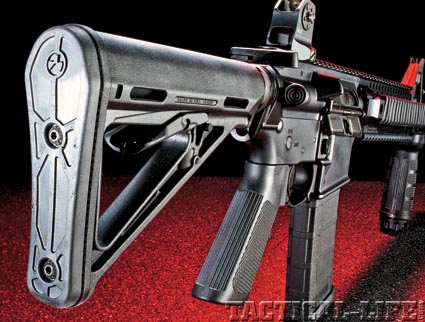 The M4V1 Lightweight has an A2-style pistol grip that is serrated in all the right places for better handling characteristics.

I mention this because cops and especially soldiers are thrust into situations that are very dynamic and violent. If their guns are not capable of surviving rugged treatment like this test simulated, they may find themselves armed with nothing but a club. Sure, you can buy a similarly configured AR-15 for about half the price of a Daniel Defense M4, but can you trust it to be rugged enough to be ready when you need it? With their torture test, Daniel Defense has established this well in advance of you or your department writing a check.

The newest AR-15 from Daniel Defense is the M4V1 Lightweight. This is a direct impingement-driven AR with a 16-inch, light-contour, chrome-moly-vanadium, cold-hammer-forged barrel. It is built on mil-spec upper and lower receivers and has a 5.56mm NATO chamber. It is also fitted with a Magpul MOE buttstock and mil-spec receiver extension. Aside from the small-contoured barrel, this is all pretty much business as usual for Daniel Defense. However, this rifle has some special things going for it.

To start with, it’s fitted with a 12-inch-long Daniel Defense Omega X Rail. This rail allows users to mount accessories in the three, six, nine and 12 o’clock positions. There are 29 slots on the bottom rail and 28 slots on each side rail. The top rail is unique in that it has a 2.18-inch opening for the fixed “F”-marked front sight to protrude through. Three, 18-slot rubber rail ladder pads come with the rifle. These can be installed or cut to a desired size and installed on the Omega X Rail to satisfy shooter comfort. Note that the new DDM4 Rails are now standard on these rifles. While slightly narrower, the DDM4 Rail has front and rear sling adaptors integrated into both the left and right side rails. Instead of being mounted with six bolts, the DDM4 Rail only requires four bolts. 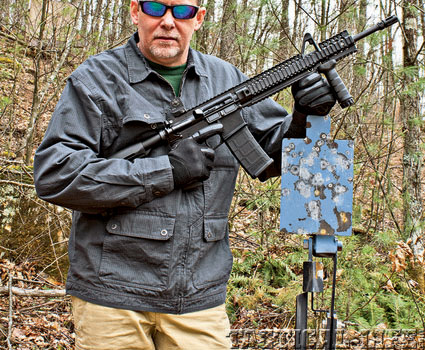 To work with this “F”-marked front sight, you’ll find one of Daniel Defense’s own A1.5 fixed rear sights. Machined from 6061 aircraft-grade aluminum, this sight that has been hardcoat anodized and attaches to the flattop receiver with one screw. The sight is adjustable for windage via the standard A1-style wheel adjustment. It has two apertures: one small and one large. They are positioned at 90 degrees and you select between the apertures by rocking the assembly. There is no offset between these apertures.

To enhance the user’s interface with the M4V1 Lightweight carbine, Daniel Defense ships each rifle with one of their Vertical Foregrips. This is a $50 add-on accessory and the best part about it is its ease of attachment. You simply loosen the bottom cap, slide it on the rail to a position comfortable for you and retighten the cap. This is a easy-on, easy-off solution for a vertical foregrip.

Another nice feature is not an accessory but in fact a modification of the lower receiver. The opening to the magazine well is noticeably flared for fast and easy magazine changes. Sure, a 30-round magazine is a lot of ammo, but when things get bank-robbing bad, you need to be able to reload as smooth and as fast as possible. 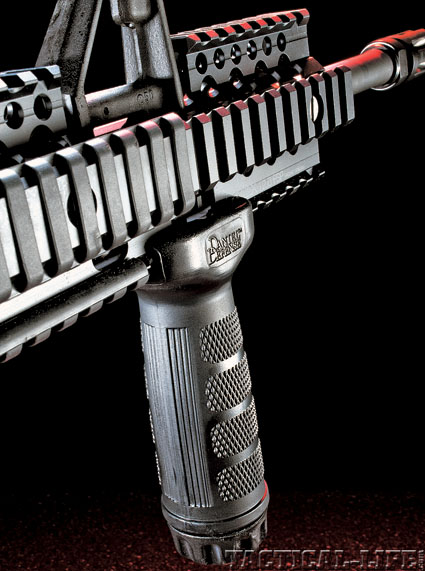 For even greater control, Daniel Defense ships the M4V1 Lightweight with their extremely durable Vertical Foregrip.

The Daniel Defense M4V1 Lightweight has a variety of practical features. The Omega X Rail is well designed, comfortable and helps make this lightweight carbine as weightless as it is. However, there are two other features that are very cool and noteworthy. First is the Daniel Defense flash suppressor, which is ready to accept several suppressors from AAC, Gemtech, Knight’s Armament and Silencerco right out of the box. The other is the rear sling swivel attachment. Positioned right under the mil-spec receiver extension, you’ll find a hole that will accept a push-button-style sling swivel. A lot of companies make different rear, add-on, quick-detach (QD) swivel attachments for AR-15s. This is the smartest and least obtrusive I’ve seen. There are also corresponding QD receptacles on each side at the rear of the Omega X Rail.

The best part is that the entire package weighs only 6.8 pounds empty. Granted, you can find some ARs that weigh less, but I challenge you to find an AR with a full 12-inch quad-rail and vertical foregrip this light. From a patrol rifle standpoint, this is a good thing. No cop wants a heavy rifle, especially one that he or she may have to carry for a full shift.

While the M4V1 passed Daniel Defense’s six-part torture test with flying colors, it was time to determine if the M4V1 Lightweight carbine was reliable with a variety of ammunition and to see how well it would shoot. I started the reliability test by firing 200 assorted rounds. There were no malfunctions. The rifle ran with the speed and efficiency of a veteran short-order cook working the lunch rush at a busy restaurant.

I executed a variety of drills, all with the open sights that came on the rifle. I even ran the rifle through my standard AR-15 test drill, which I call the “Scout Rifle Workout/Carbine Drill.” This drill requires firing one shot while standing, one while kneeling, one seated and one from the prone position—all at a 5-inch circle 50 yards away in less than 30 seconds. I ran it twice—once with the large and once with the small aperture sight—and only missed once. Then it was time for accuracy testing from the bench.

When I test an AR carbine from the bench, I don’t baby it. I’ll fire five 5-shot groups with each load, allowing no time for the barrel to cool between groups. This may seem unfair to the rifle, but an AR is a volume-fire weapon. Would group averages have been smaller if the barrel was allowed to cool? Probably. But in the real world, cops can’t call time out to cool their guns. I thought this lightweight carbine did pretty well from the bench, averaging less than 1.5 inches for 15 five-shot groups with three different factory loads from Black Hills, Remington and Winchester. In all, Remington’s 69-grain Match ammo produced the tightest five-shot cluster, measuring only 1.19 inches wide, while the fastest load was Winchester’s 55-grain Ballistic Silvertip, which traveled 3,111 feet per second (fps) out of the barrel and still produced a smallest group sized at 1.36 inches. And all these groups were fired with open sights, too! I have to give the trigger some credit. It broke crisply at 6 pounds after a slight bit of take-up.

Rugged, reliable and ready for duty—right out of the box. That’s the best way I can describe the Daniel Defense M4V1 Lightweight carbine. It may cost a bit more than some other similarly configured AR-platform rifles, but at least with an AR from Daniel Defense, you know the design has been torture tested. If you’re fighting bad guys, that kind of confidence is worth a great deal. For more information, visit danieldefense.com or call 866-554-4867. 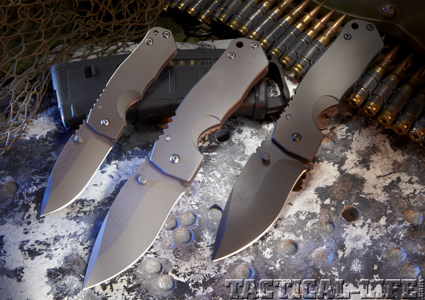 Weighing only 6.8 pounds empty, the Daniel Defense M4V1 Lightweight lives up to its…