There are a lot of companies making black rifles these days, and it is often hard to separate the wheat from the chaff. However, one name stands out from the crowd: Daniel Defense. Founded in 2001 by Marty Daniel, the company’s slogan of “Lighter, Stronger, Better” is more than just words. When Daniel Defense started out it had one product, a sling adaptor. From there the company expanded to other accessories, including a new rail for the M4. The Rail Interface System, or RIS II, was designed to meet a request from the U.S. Special Operations Command. Specifically, it provided a free-floated barrel and the ability to mount an M203 grenade launcher. After extensive testing, USSOCOM selected Daniel Defense as its sole source provider for rails. Over 10 years later, Daniel Defense is still delivering RIS II rails to USSOCOM and other military units, with more than 15,000 DD MK18 rails being delivered to date. 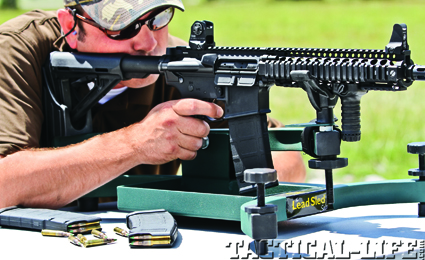 Off-hand, the MK18 SBR handled well and seemed perfectly balanced. From the bench, the rifle was accurate and ran flawlessly.

How tough are Daniel Defense rifles? If you visit their website or surf the net you have probably seen Larry Vickers’ torture-test video. Larry spent over 20 years in the U.S. Army and was a member of 1st Special Forces Operational Detachment-Delta for the majority of his career. Besides owning his own training and consulting firm, Vickers is also a consultant to Daniel Defense. In the video, Vickers takes a DDM4 carbine and buries it, sinks it, shoots it, runs it over, blows it up and drops it from a helicopter. After each evolution, the rifle was fired to evaluate reliability and accuracy. The results speak for themselves. Check out daniel defense.com/torturetest.

From its humble beginnings, Daniel Defense has grown to a staff of over 130 employees. While keeping their original 38,000-square-foot facility in Black Creek, Georgia, the company will be opening a 90,000-square-foot production facility in South Carolina in late 2012. What sets DD apart from others is its total commitment to quality. It manufactures nearly every component of their rifles in-house, including barrels, upper and lower receivers, bolts, fire control parts, pins and detents.

A quality barrel is at the foundation of every Daniel Defense rifle. All of their mil-spec barrels are cold-hammer-forged through intense hydraulic pressure that is applied at opposing angles by carbide steel hammers. During the hammering process, a mandrel is inserted into the bore. The hammers shape the barrel’s chamber and its lands and grooves around the mandrel, creating a defect-free bore and consistent chamber. Every barrel is MP-tested to ensure there are no hidden flaws or fractures.

Daniel Defense offers a wide selection of M4 rifles in carbine- or mid-length gas systems. However, what attracted Tactical Weapons’ attention was their MK18 SBR. The MK18 is an all-out clone of the carbine used by USSOCOM and features a 10.3-inch barrel. While the company offers select-fire rifles to government agencies, our test rifle was an NFA-approved semi-automatic. This allows the MK18 SBR to be sold to any qualified buyer through the customer’s local FFL/SOT dealer.

The MK18 upper receiver is machined in-house to military specifications and features M4 feed ramps. The bolt carrier group is MP-tested and, as it should, has a properly staked gas key. The 10.3-inch barrel is forged from chrome-moly-vanadium steel with a 1-in-7-inch twist rate. The bore is chrome-lined, and the exterior is coated with a mil-spec phosphate. Every barrel has identification markings that include the company’s initials, the method of rifling, the MP stamp for MPI testing, the caliber, the twist rate and the born-on date (month and year). The flash suppressor is a DD design similar to a standard mil-spec A2 unit.

The MK18 RIS II rail is secured with six screws for easy installation and removal, and mates to the upper receiver to allow for a continuous rail. The side rails are secured using three flathead screws, and every other rail slot is numbered. The design of the RIS II is both lightweight and low profile. Our test rifle came with a polymer vertical pistol grip and ladder covers. The lower receiver on the MK18 is also machined to mil-spec and features a quick-detach swivel attachment point. The manufacturer’s markings have been engraved instead of roll-marked. This gives the lower a very clean and crisp appearance. The pistol grip is of the standard mil-spec A2 style. A sharp eye will also notice the flared magazine well and Magpul enhanced triggerguard. The enlarged and beveled magazine well enables faster and cleaner reloads. The internals are mil-spec, and the trigger pull measures 7.5 pounds with some slight grit during take-up—we did notice that the trigger got progressively better as we put more rounds through the rifle. The Magpul MOE stock is standard equipment on the carbine. 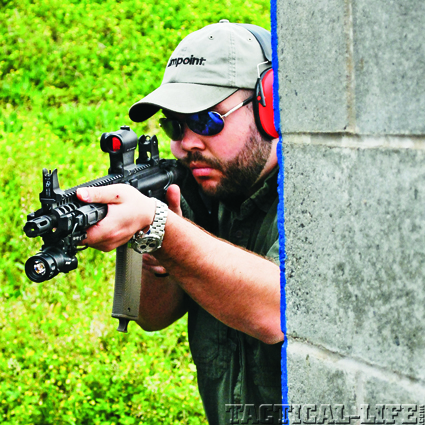 Our rifle came equipped with optional DD fixed iron sights. These sights are manufactured out of aircraft-grade 6061-T6 aluminum that is then hardcoat anodized. The design of the sights minimizes the footprint on the rail, allowing space for additional accessories. The front sight utilizes a sight post while the rear sight uses an A2 aperture with A1 adjustments. Both the front sight blade and rear sight aperture are protected by wings. These are rugged sights that are designed to withstand hard use. While flip-up sights are the rage, I grew to like the DD fixed sights for their clean sight picture and compact design.

When ordering the rifle, I mentioned that I had recently received one of the new Aimpoint Micro T-1 sights with the 2-MOA dot. The company included their tall Micro Mount with the rifle. The design is lightweight and low profile, ideal for those shooters who do not require a quick-detach mount. The mount features a recoil lug that minimizes sheer forces on the factory mounting screws. The DD Micro Mount features a “Rock & Lock” clamp and secures to any Picatinny rail with two slotted machine screws. These fasteners thread into stainless steel self-locking threaded inserts that resist vibration and loosening. 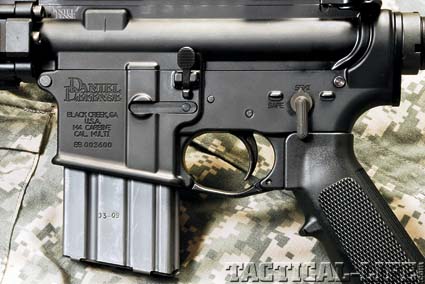 Daniel Defense manufactures all major components for their rifles, excluding springs and furniture.

The Aimpoint Micro series of optics has become the choice of both law enforcement and military units. The 2-MOA is the latest in the Micro series and retains all the features of the original T-1. This includes being waterproof to a 25-meter depth and having a constant run time of five years on a single battery, as well as night-vision and daylight settings. We also mounted a SureFire RAID WeaponLight to the MK18. The RAID is a low-profile dual-output light that is capable of either white light or infrared output from a single head. By pushing the locking collar forward, the head can be rotated to select white light or IR illumination or to disable the light. A selector switch is located on the left side of the light with positions for high, medium and low output, plus a strobe and a flashlight mode. The RAID produces a maximum of 150 lumens on the high setting and 15 lumens on the low setting. The IR selector switch allows for a high, medium and low setting for night-vision use. The rail-mounted tape switch is waterproof and provides switching for both intermittent and constant-on light.

We broke the MK18 in using Hornady’s 55-grain .223 FMJ Training load. It’s a low-cost round that is designed to deliver the same point-of-aim/point-of-impact as the Hornady TAP 55-grain tactical ammo. Part of the cost savings comes from the use of a lacquer-coated steel case and Berdan primer. From the start, the MK18 was 100 percent reliable. While we did not measure the groups, the Training load met our expectations and the factory information.

For accuracy testing, we took into consideration that the MK18 is designed for CQB and, in most cases, would be run with a red-dot optic. All testing was done using the 2-MOA Micro T-1 at 50 yards. We selected three proven duty loads that have established a good reputation in real-world confrontations. 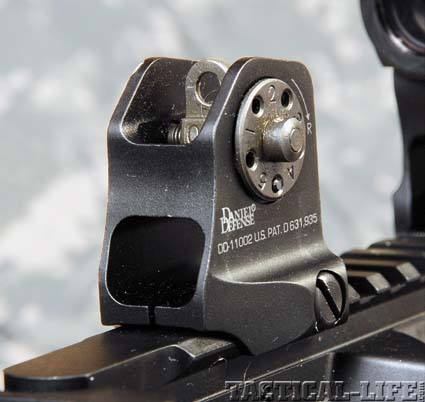 The Daniel Defense fixed rear sight is a beefy design, using an A2 aperture and A1-style adjustments.

The Hornady TAP Urban load is a 55-grain ballistic tip designed for use in short barrels. The load is designed for high-risk environments where overpenetration is a primary concern. Federal’s 55-grain Hi-Shok is a traditional soft-point projectile that has been popular in the law enforcement community for many years. The ASYM Precision load is a 70-grain Barnes Triple Shock X, and its design allows the load to expand at 1,800 FPS (feet per second) or greater, making it ideal for short-barrel rifles.

The MK18 performed well during a number of tactical range exercises. In the past I have evaluated a number of SBRs with barrel lengths from 7 to 12 inches. I compared the MK18 to several of these uppers and found that the 10.3-inch barrel is the ideal length. The MK18 was better balanced and, with its lightweight barrel profile, tracked easier than the 7- and 12-inch uppers.

I treat test guns as if they are my own and, therefore, did not subject the MK18 to any Vickers-like torture tests. However, I intentionally ran the rifle dry and did not lubricate it during the evaluation. I used both Magpul 30-round and standard metal 20-round magazines. Running a short rifle in confined areas or from a vehicle is always challenging. The shorter 20-round magazine is ideal for these situations, as it reduces the overall profile of the weapon.

Were I to set up the MK18 for my duty rifle, I would only make a few changes. First, I would order the rifle without iron sights and install a set of Troy Industries’ folding backup sights. Second, to complement the folding sights, I would mount the Micro T-1 using LaRue Tactical’s Absolute Co-Witness. These two changes would reduce the overall profile of the MK18 and mirror the setup I have on several other rifles. The only other change I would make would be to replace the birdcage flash suppressor with a SureFire adaptor in order to utilize one of their 5.56mm suppressors.

Prior to this article, I had heard a lot about Daniel Defense and the company’s commitment to excellence. The fit, finish and performance of the MK18 certainly lived up to those expectations. As I have mentioned in previous articles, the SBR market has experienced tremendous growth, and I don’t see this trend slowing down any time soon. The MK18 is an ideal choice for law enforcement, tactical teams and other end-users who require a quality, compact M4 Carbine.