Daniel Defense has long been a go-to for professional-grade rifles. Their guns are not only popular with the civilian market but are also found in SWAT teams and special operations units around the world. As with any company that has made a big successful splash, you might expect Daniel Defense to sit back and smoke a celebratory cigar and revel in their position. That is not Daniel Defense however and that was even more apparent at the 2022 SHOT show in Las Vegas. During the show, I was able to get a look at their new D4 line which includes four MK18 RIII rifles. This line includes guns with barrels at 10.3, 11.5, 14.5 (pin and welded), and standard 16-inch lengths. Today we’re looking at the Daniel Defense MK18 RIII SBR. 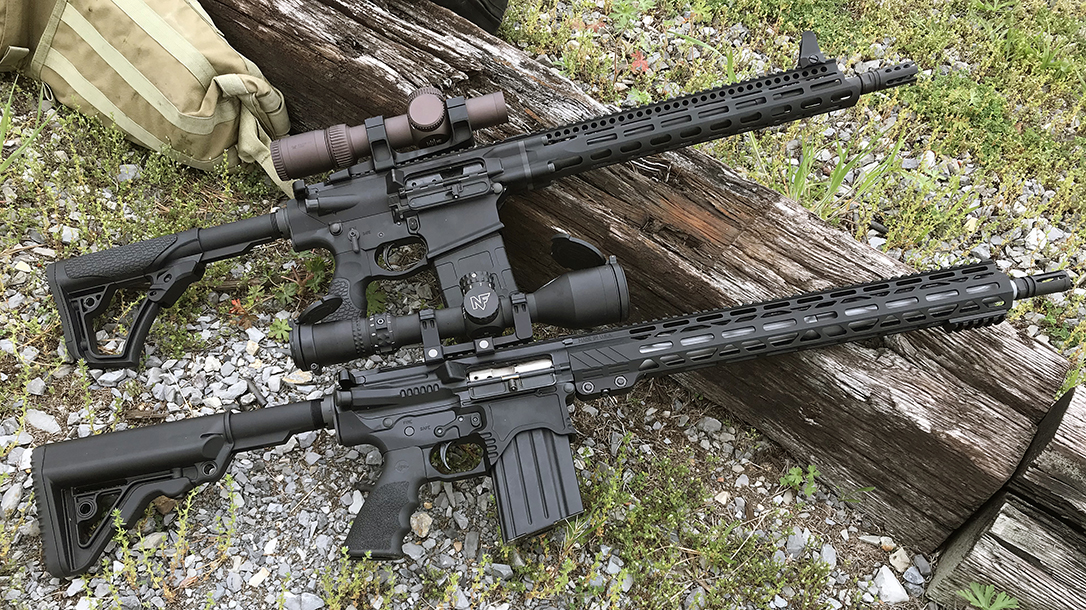 The DD4 line is primarily focused on a new and enhanced lower. This new design is completely ambidextrous. While there are others that make this claim, Daniel Defense has taken it to a whole new level. The ambidextrous controls are perfectly fit into the gun and do not have the “afterthought” feel of some other guns. The controls on the right and left sides of the gun include a safety selector, mag release, as well bolt lock. The bolt lock/release is especially well designed with an oversized but not protruding bolt release. It is easy to index even with gloved hands and is something other companies would be well served to look at. The guns all include the classic Daniel Defense furniture such as their pistol grip and five-position collapsible stock.

One of the other new features of these guns is the new RIS III rail system. This rail is modeled after their successful RIS II developed for SOCOM. The unique two-piece rail now is configured in M-LOK for extreme durability with less weight. It features a hardcore 6-Bolt, Bolt-Up System used on the RIS II, and the same two-part free-float design that never makes contact with the barrel. This is true even with an M203 grenade launcher installed which was a big factor for SOCOM. This full free float means barrel harmonics and accuracy are not affected. The new design also includes QD points to allow sling attachment.

Out of the box, the gun comes with the popular Daniel Defense iron sight set. This consists of the A1.5 fixed rear sight and rail-mounted fixed front sight. The gun also includes Daniel Defense’s Grip-N-Rip charging handle. It is an ambidextrous handle that provides a secure grip and even more flexibility for right- and left-handed shooters. It is also designed with an anti-gas feature to keep gas away from your face and provide a better shooting experience.

Getting the Daniel Defense MK18 RIII SBR for Testing and Evaluation

Daniel Defense was kind enough to send a rifle my way to get some extra range time on. My blaster for testing would be the 11.5 inch MK18 DIII. The first impressions were good. The fit and finish on the gun were classic Daniel Defense. There was no sloppy rattle in the gun, and everything was snug. The gun is two-tone with a dark copper handguard and black upper and lower. This is a striking combo, and one people will like. Yes, it matters. As I always say, nobody sits around telling their friends about their ugly guns. The rifle came with the iron sights I mentioned above so I added an Eotech HWS XPS3 for range work.

After a quick zero, I went to work putting the gun through its paces. The range day was simply a blast. It was enjoyable to run drills with such a small weapon. After I shot groups to measure the rifle’s accuracy, I spent the rest of the day hammering steel from 25 to 200 yards. And let me just say that this weapon’s maneuverability cannot be understated. In drills that had me moving the gun from my strong side to my support side, my times were much shorter than those with a full-sized rifle. This is also where the ambidextrous design of the gun shined.

While left-handed people will hail this as an advancement towards southpaw equality, it is more than that. Serious shooters regularly train in transitioning from the strong side to the support side. If you need to shoot around a barricade on your left side, for example, being able to shoulder and easily run the gun there is critical. This is also a critical skill for those who train in transitioning because of wounds or limitations of the strong side. The controls are easy to access and manipulate.

Accuracy-wise, I shot offhand and easily got one-inch groups. If I had been militant about it, I would have benched it to see what it could really do. However, that is not what this gun is about. It is about being able to put rounds on target in a hurry and in that capacity it succeeded. Furthermore, performance and function-wise, the gun was flawless. I ran three flavors of ammo with no hiccups at all. They included Federal American Eagle 62 gr FMJ BT, Hornady TAP SBR 75 gr, and Ammo Inc 77gr HPBT.

The flash hider on the gun was a pretty plain Jane A2 style device that did the job. My personal preference would be to run the gun suppressed and take advantage of its overall short length. There is is always something that I believe could be done better though. In this case, it is the trigger. The one included on the gun is their standard mil-spec curved trigger. The pull weight is approximately 7 lbs. It is sufficient with only a short take-up and a decent crisp, clean break. A better trigger would make this gun shine even more.

I do understand however why the mil-spec design is standard. For instance, most LE agencies and Military clients require this Mil-spec design for legal and liability reasons. While I did not get a chance to run it suppressed, I was able to notice a reduction in gas back in my face. The charging handle designed by Daniel Defense works well to mitigate gas back in the shooter’s face. The Eotech I mounted seemed to be a natural for the gun and lined up perfectly with the iron sights. I was concerned that there might be some obstruction in the sighting but that was not the case. The duo turned out to be fast and very accurate. Magazine-wise, the gun came with a standard Daniel Defense mag. I have always liked these mags and they run well in all of my guns.

Speaking of Improvements, the new Rail is Great

The new RISIII system is M-Lok is an improvement. It is easier to mount a variety of kit now. Overall, I give the gun two thumbs up. It is a reliable fighting rifle that is meant for serious things. It is also built to last. One look at the hearty six-bolt blast-proof attachment for the handguard and you will see longevity in its future. I am not shilling for Daniel Defense, but I can say after a lot of trigger time on this gun, that it is not overpriced. Try to get some time behind the trigger on the MK18 DIII and test drive it yourself. I do not think you will be disappointed.