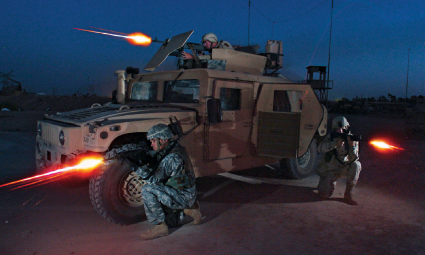 Red tracers marked the path of our rounds sent downrange in the direction of Iraqi infantry and armor. An uncomfortable reminder of the very real possibility of death came to me as I first watched green enemy tracers flying over my own position. I couldn’t seem to sink low enough. With aerial support, under the cover of night, the battle continued for nearly 30 minutes. Crawling around in the back of my armored vehicle, I found the piece of equipment that gave everyone on our side the tactical advantage…NV (night vision). 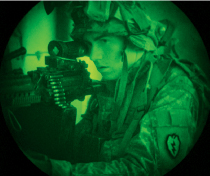 As a DM (designated marksmen), I spent at least two hours a night as a “guardian angel” (someone pulling watch as an armed perimeter guard) with a Barrett M82A3, studying the landscape with a set of night vision optics or with the help of FLIR (Forward Looking Infrared) thermal imagery. During our baptism by fire, it was the NV and thermal devices that helped us claim victory before dawn. The enemy had hoped to ambush us, and draw us in for close combat. With the benefits of these high-tech tools and stand-off weaponry, we reduced the risk of American casualties while eliminating the enemy threat.

Before the advancement in NV technology specifically designed for use with weapons, troops would “rig-up” a rifle with a hefty AN/PVS-4 “Starlite” scope or a NV monocular like the AN/PVS-14. It seemed that in most cases, troops had to adapt the rifle with a combination of mounts, usually falling back to the all-purpose duct-tape.

Gen-IV Night Vision
A NVD (night vision device) is an optic that produces images by contrasting different levels of light that approach darkness. Night vision works in darkness by detecting ambient light that’s reflected by objects in the viewing area. Most NVDs do not reproduce color so a monochromatic image is usually seen. Early in development, producers of NV determined that the human eye is most sensitive to the color green, a color centered in the visible light spectrum. As a result, most of the NVDs produce their images with the well-known green tone.

First used in World War II and the Korean War, some snipers in the US Army were equipped with the M1 and M3 night sighting devices, affectionately termed the “snooper scope.” The military began a serious investment in developing this technology during the Vietnam War, effectively creating GEN-I (Generation 1) devices like the AN/PVS-2. In the ‘80s, improvements in image resolution and reliability developed into the GEN-II AN/PVS-4 “Starlite” and a pair of monocular devices strapped uncomfortably to a helmet.

Today, NV is designed for specific purposes in smaller and more versatile systems. Most NV used by law enforcement and military falls into the GEN-III category with further improved image resolution like that seen in the AN/PVS-7B and AN/PVS-14.

Recently, GEN-III devices have seen improvements by a unique power supply that allows the NVD to adapt to changing light conditions and a reduction of image noise seen in other generations. These improvements have prompted the consumer market to label this night vision GEN-IV but the US Army has not yet authorized this term. The AN/PVS-22 is an example of this technology and can be mounted to a rifle in front of an existing scope along its sight rail. This combination provides a tactical advantage at night with the ability to recognize an enemy target under starlight beyond 500 meters. There is no shift in the boresight with respect to the relation to the POA (point of aim)/POI (point of impact), day or night.

FLIR
I first saw FLIR technology when it was adapted to our armored vehicles to aid in maneuvering through the Iraq desert at night. In 2003, the first pocket-sized thermal imaging camera was introduced with the first several hundred deploying with us to Operation Iraqi Freedom.

Using thermal energy to create the image, FLIR technology has been used to aid drivers at night or in a fog, target acquisition by troops on the ground and planes in the air, tracking through low visibility conditions and rescue operations. An unusual use of FLIR technology came recently when a soldier identified an insurgent in a crowd who had planted an artillery shell used as an IED along a road. The IED was detected and noticeably carried the heat signature transferred from an insurgent. Scanning a gathering crowd using a FLIR, the insurgent was seen with a cold spot on his chest in the shape of the shell where he had held it against his body.

Using a FLIR device with a rifle provides three tactical advantages. One being that the FLIR imager is nearly impossible for the enemy to detect, unlike some other NV optics that project infrared that would be visible to an enemy with similar equipment. Second is that heat is difficult to hide, where light can be covered or distorted. Lastly, FLIR optics can see through smoke, fog and other atmospheric conditions.

Using the FLIR on a rifle does require a specially trained operator, as it can be difficult to distinguish targets. Because I was a DM attached to an armored vehicle unit, I participated in classes with gunners to learn how to distinguish friendly and enemy vehicles from a heat signature radiated from the engines. With this training it was easier to ID and knockout many enemy threats with a hard-hitting .50 caliber.

Thermal IR Imagers
IR (Infrared) imaging is a less-common but effective tool when there is insufficient visible light. The military has incorporated IR technology into target acquisition systems, surveillance, and night vision. Thermal IR imagers convert heat energy into a spectrum of thermal radiation. The result is a system that shows a visual picture that captures moving targets in real time.

The color spectrum allows an observer to identify vulnerable points on a hard target, indicated by hot colors (i.e., yellow and orange). Referencing the picture on the thermal IR imager, the shooter can quickly locate the weak point on a vehicle or threat behind a wall and disable the source of the heat with a shot.

Like FLIR technology, thermal IR imagers are able to see through smoke, locate persons during search and rescue operations and detect the base of fire from a coordinated attack.

Tactics
Humans naturally have poor night vision, so technology is vital in winning a night operation. The tactical use of a large caliber rifle with an NVD means that offensive maneuvers are more flexible and the standoff distances enabled by the rifle’s range places the enemy in a compromising situation.

If it is determined that a target is not equipped with NV technology of its own, the use of IR systems expands the tactical advantage of a night operation. An active IR system that sends an IR light source is undetectable to the human eye and can be used to covertly illuminate or target a threat. If a target is known to have NV, a passive systems system without IR is useful during reduced light conditions without having to compromise one’s position.

IR lasers are an effective tool, particularly due to the fact that it may be difficult to accurately determine range at night. During daylight hours, a shooter can use a day filter on the NVD and sight in at a practical range for engagement at a known distance. When this range is estimated at night, the IR laser will increase the operator’s first-round hit probability.

Many IR devices are beginning to feature a strobe tool that can be utilized on a battlefield where many IR lasers are being used. In a squad setting where multiple troops are engaging targets with smaller calibers, the squad leader can utilize the strobe feature or manually activate his IR laser in a strobe-like manner to designate targets that need to be taken down. This tactic is a very effective tool for a small unit leader where hard target interdiction is necessary or radio communication is reduced.

Operators who wish to equip their rifle with an LED or “white” light can use these without giving away position on a battlefield. IR filters used in conjunction with white light sources can be used for signaling as well as lighting for extreme covertness. Filters are a cost effective and time efficient alternative to a standard white light bulb replacement. Any operator will find that IR filters greatly enhance all generations of night vision use and tactical advantage.

Final Notes
Darkness is camouflage. It can hide an insurgent or protect you from enemy detection. A DM or sniper armed with a high powered rifle often is detailed to work in a reconnaissance role, where missions can be better accomplished at night if that operator is equipped with the ability to see in the dark. Large caliber rifles with extreme range and accuracy are particularly suited for combat roles where distance becomes the enemy’s handicap. And with this handicap, NV can work in tandem with the effective firepower from a Barrett to reduce the risk of casualties and putting a quicker end to a firefight.