WASHINGTON, Oct. 16, 2009 – Moviegoers were captivated as they watched a metallic assassin morph before their eyes in “Terminator 2.” The villain turned to liquid before assuming new forms capable of squeezing through narrow openings and transforming its arms into bladed weapons and solid metal tools.

Scientists at the Defense Advanced Research Projects Agency were wowed too. Now they’re working to deliver that same kind of technology to support the good guys: warfighters on the battlefield.

He’s leading up the effort to develop “programmable matter,” which he calls “the ultimate adaptable material.” It will be capable of changing size and shape and taking on new properties for one use, he explained, then adapting to a whole different form for another use.

Zakin clarified that he’s not out to change warfighters themselves, just the equipment they use, the clothing they wear and the loads they carry.

“Warfighters carry an incredible amount of stuff and they don’t have any more room to carry more,” he said. “Yet they are facing much more complicated battle spaces. They’re going into caves and working in cities. They need more sophisticated tools to deal with these environments, yet they can’t carry them.”

The logistical challenge of getting equipment to remote areas such as Afghanistan exacerbates the problem, he said.

Enter the concept of programmable matter, a convergence of the fields of chemistry, information, mathematical theory and engineering.

Zakin envisions a day when warfighters will be able to reach into their kit, pull out a lump of programmable matter and form it into whatever they need.

Think of it as carrying a paint can with a bunch of particles inside, he advises anyone struggling to understand how it all would work. The particles could be different shapes and sizes, be made up of different materials and have different functions.

The same principle would work for uniforms, which could change their thermal insulating properties according to the climate: the deep freeze of the Afghan mountains, the blast furnace of summertime in the Middle East.

Fantastic as this all sounds, it’s on its way to becoming a reality.

Five university-led teams are participating in DARPA’s Programmable Matter program, and by the middle of next year, at least one is expected to emerge with a demonstration project. Halfway through the program’s second and final phase, all five teams are making convincing progress that it’s all possible.

The teams began the first phase of the program doing computer modeling, but got so excited by the project that they jumped headfirst into the second phase and began building actual prototypes, Zakin said.

By the end of the second phase, they’re expected to demonstrate that they can take a single set of building blocks and create five different geometric shapes with the strength of engineering plastic.

“Everyone is making progress toward meeting these goals in a very meaningful way,” Zakin said. “I’m confident that most, if not all the teams, will succeed.”

The ultimate benefit to warfighters would be mind-boggling. “Imagine the possibilities: an entire toolbox originating from a single material form, or flexible clothing or equipment that can adapt to the immediate and changing needs of the warfighter, perhaps even ‘smart’ bandages embedded with diagnostic sensing capabilities,” Zakin said. “The possibilities are endless.”

In the simplest terms, programmable matter would bring warfighters “maximum capabilities with minimum carry weight,” he said. “It would give them the ability to carry a little amount of stuff and do a lot with it. It creates a whole new paradigm in flexibility for the warfighter.”

But the implications go far beyond warfighting, Zakin said. Aircraft wings built of programmable matter could change in flight to provide the best aerodynamic properties. Everything from computers to televisions to cars could be programmed to automatically update themselves with the newest features and configurations. Clothing could morph into the latest fashion styles.

In a nutshell, nothing would ever have to become obsolete.

“This is not fantasy, actually,” Zakin said. “Aspects of this already are being done in this project.”

“Personal manufacturing” could take over. Consumers could go online, buy a blueprint for whatever they need, download the instructions, then feed them into a personal assembler that makes the product before their eyes, he said.

In some ways, Zakin said he’s been preparing for the Programmable Matter program since he first saw as a young boy the concept depicted in the 1950s sci-fi movie, “The Blob.”

“Most of my programs come out of the movies or comic books,” he said. “It’s what I do for a living.”

Decades later, he said, it’s gratifying to be at DARPA, where he’s on the leading edge of helping bring fantasy to life.

“It allows us to do something very, very important, and something no one else has ever done before,” he said. “It’s very DARPA-like.” 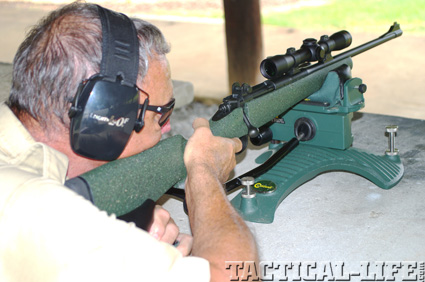 WASHINGTON, Oct. 16, 2009 – Moviegoers were captivated as they watched a metallic assassin…