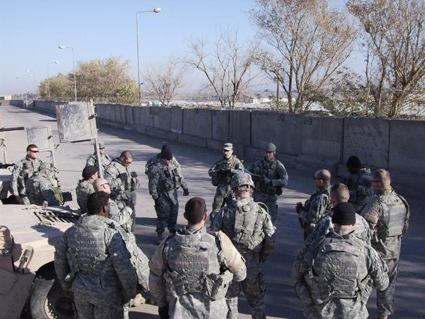 FORT MONMOUTH, N.J. – The four man sniper team hardly dared to breathe. For two days and nights they had waited for the right situation, and it was finally here.

To Sgt. 1st Class Brandon McGuire it seemed that all his prior experiences such as serving on the 82nd Airborne Division’s marksmanship team, being a sniper and reconnaissance platoon observer and shooting sniper weapons for a scout platoon, had prepared him for the moment.

“I even managed to talk an Explosive Ordnance Detonation unit out of their sniper rifle since they didn’t know how to use it,” laughed McGuire.

A platoon sergeant in 3rd Battalion, 509th Parachute Infantry Regiment, McGuire had deployed for Operation Iraqi Freedom nine months earlier and was stationed at Forward Operating Base, Iskandaryia, in Iraq.

Four days before his current mission, McGuire’s platoon had been ordered to the western sector of their area of operations (AO) to locate and destroy an enemy mortar team.

“Losing trust in us to take care of the situation could prompt the locals not to help us anymore, and that only makes for more enemies,” said McGuire. “This was also a mission we welcomed since it was a crucial one and not what we called a ‘Groundhog Day,’ which is a regular everyday patrol.”

During the mission, two of McGuire’s Soldiers had been wounded by an Improvised Explosive Device (IED); one critically.

The road they were on had been the backdrop for numerous Americans getting attacked and killed, which prompted McGuire and his platoon leader to decide enough was enough. After evacuating one Soldier to Baghdad and the other to their medical unit at the Forward Operation Base (FOB), they began formulating plans to end the problem once and for all.

Heading to a location they called the “tractor factory” which had many vantage points, McGuire assumed his post in one tower while his platoon leader headed for the other.

Although it was night, the men knew they had an excellent view of the road in question and a wall around the factory provided protection for their vehicles.

Windows were quickly camouflaged and a platform built for the sniper weapon system, an Improved Target Acquisitioning System (ITAS). “Best of all, no one knew we were there,” added McGuire.

Because dismounted radios could not reach back to the battalion tactical operations center (TOC), a communications platform was also assembled. “Commo,” according to McGuire, was their best weapon in addition to individual Soldiers retrieving information.

Combined observation reports provided excellent clues to enemy behavior and operations. And because they were usually outnumbered during missions, contacting the TOC and aircraft for additional help was their lifeline.

In keeping with the military tradition of carrying a special good luck item along with the rest of his military gear, McGuire had packed away a family picture.

His hope was that should he be kidnapped, realizing he had a family might earn him some leniency.

For the next two days and nights all eyes focused on the road that had been declared “black,” meaning no one was allowed on it unless they had route clearance.
His crew of four to five Soldiers rotated every so often, but McGuire stayed in the tower occasionally taking time to sleep and eat.

“You have to sleep sometimes or you become ineffective,” said McGuire. “And to pass the time we played this game called ‘if.’ Everybody takes turns making up a fantasy about where they would most like to be right now. The obvious answer is home and family so that’s not allowed. We wanted to hear about sensational places with good food and company to go with it. The other rule was that everyone had to take their time describing the scene to make the hours pass more quickly.”

Sunrise on the third day brought McGuire and his crew the prey they had been stalking. The target was walking on the canal which ran east and west of their position. For over an hour they watched his suspicious behavior which included digging an item out of the canal’s embankment.

Agreeing it was a mortar tube McGuire contacted the battalion TOC and requested permission to engage. Receiving an affirmative answer, the team quickly arranged the spotter’s scope while McGuire set up behind the SWS.

The range finder indicated the insurgent was over 1,300 meters away, a precarious distance for even the best of snipers. And a high wind required the crew to do wind calculations. Despite the problems McGuire’s “cool” attitude prevailed. Too much was at stake to fail now.

“You only get one shot,” said McGuire. “That means you have to keep your self-control because if you miss your position is uncovered. I also reminded myself that if I was successful, my Soldiers as well as other Americans and the people we’re trusted to protect would finally be safe.”

McGuire’s sights bore down on the rebel for another hour as he carried his tube up and down the canal.

Because it was a rolling terrain, he kept dropping in and out of sight. Several times McGuire had the insurgent’s head in focus, but didn’t believe he could shoot accurately with so much distance between them.

He was also unsure about the wind and his calculations, not to mention the adrenalin rush that was penetrating his entire body.

Suddenly, the target area McGuire desperately wanted appeared. Called the “triangle measurement,” the rebel’s throat down to his upper chest, was now in plain view.

Hearing the spotter yell “fire!” McGuire pulled the trigger. He was immediately lost in the smoke from the weapon’s powerful outburst in the small building.

Scrambling for another attempt, McGuire already knew it would be too late. There was only a cloud of smoke where the rebel had been.

McGuire’s spotter, however, had kept his visual and was yelling, “Tango down, Tango Down, he’s gone!”

McGuire had accomplished the near impossible. Though the rebel was nearly a mile away, he had successfully made what came to be known throughout his unit as the “million dollar shot.”

“They even put that in my record,” laughed McGuire.

After high fives and congratulations the team quickly turned its attention back to the mission. Now they realized the wind had been a blessing by muffling the sound of the shot. No other insurgents would be able to learn their location.

The battalion TOC was quickly notified and a request made for the Iraqi Army to retrieve the body. A firefight on their arrival made it impossible for the Soldiers to acquire the target. The rebel, however, was identified a few days later by a local Iraqi official.

“We weren’t sure what happened to the mortar tube, but about a week later we captured a truck with a similar one so maybe that was it. More importantly, after our platoon’s engagement there were no more mortar attacks on that road,” said McGuire.

While the “million dollar shot” earned much praise for McGuire and his sniper team, he insists the driving force for their success was their injured battle buddies and other Americans hurt on the road.

“Camaraderie is what keeps your Soldiers together and at their best,” said McGuire.

“Platoon Soldiers become lifelong friends. You share so many experiences together which you can never explain to someone else. They would never get it. However, you always have your fellow Soldiers to go to. Just to give you an example, my platoon leader left the service, but we’re godparents to each other’s children.”