by Fred Pushies
in Uncategorized
0 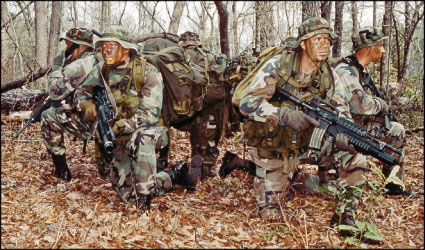 The day is overcast as a group of Force Recon Marines maneuvers through the woods to their objective. Today’s exercise will take these Leathernecks over the river, through the woods and across the marshland of Camp LeJeune, North Carolina. They are not on their way to grandma’s house, but rather on a direct action mission. From SATCOM (satellite communication) to SOFLAM (special operation forces laser marker) and an assortment of weapons, the small six-man team shares the load of the wide assortment of mission essential equipment.

Once on site, the team settles in, security is in place, the Marines quietly and quickly set up the SOFLAM and then the SATCOM. The men of Force Recon are experts in reconnaissance providing the MEU(SOC), USMC expeditionary unit (special operations capable), commander or combatant commander with the necessary intelligence from deep into enemy territory. While some missions require them to avoid contact, other direct-action missions place them directly into harm’s way, as they take the war to the enemy.