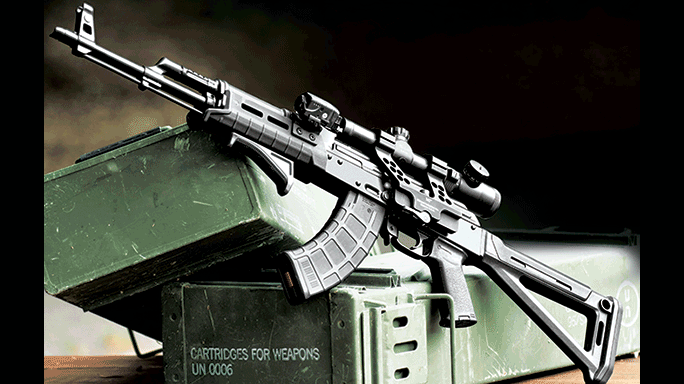 1 of 6
AmerAKan Steel: Destructive Devices Industries’ DDI-47 Rifle
Sporting Magpul furniture and a matching PMAG, the 7.62x39mm DDI-47 looks as great as it shoots. Shown with a Hi-Lux CMR-AK762 riflescope and a Crimson Trace laser. 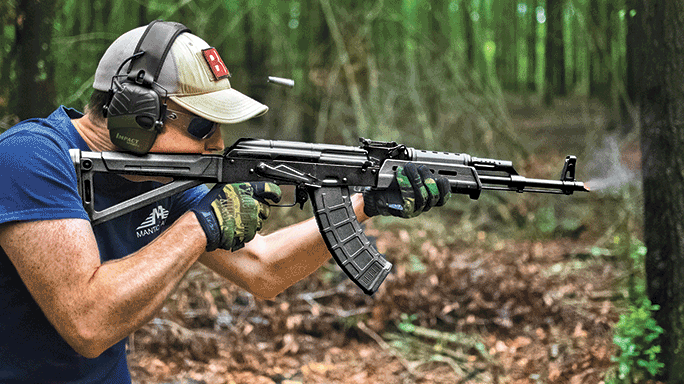 2 of 6
AmerAKan Steel: Destructive Devices Industries’ DDI-47 Rifle
Despite the carbine’s light weight, felt recoil was minimal during testing, making it easy to get back on target for lightning-fast follow-up shots. 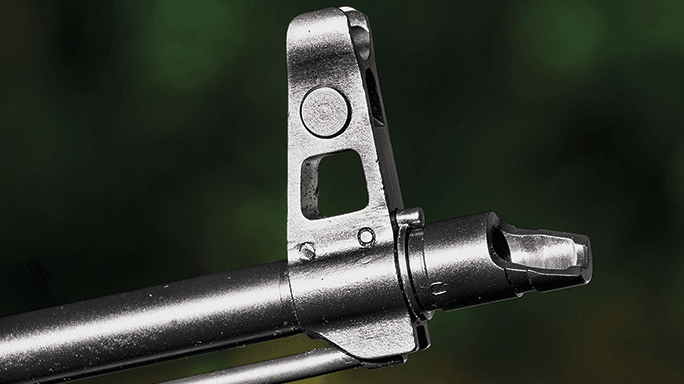 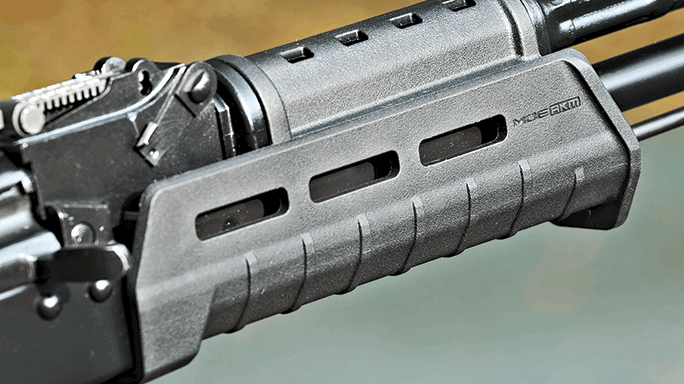 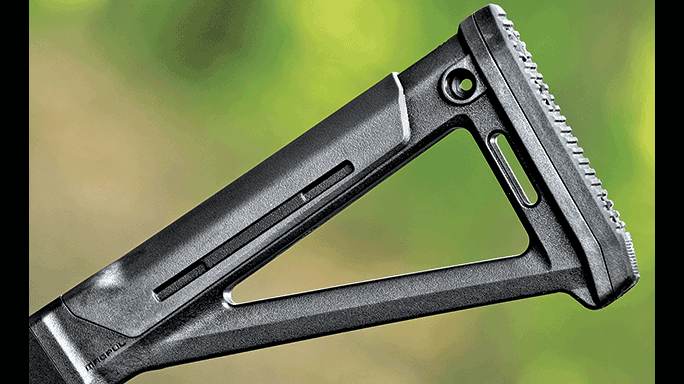 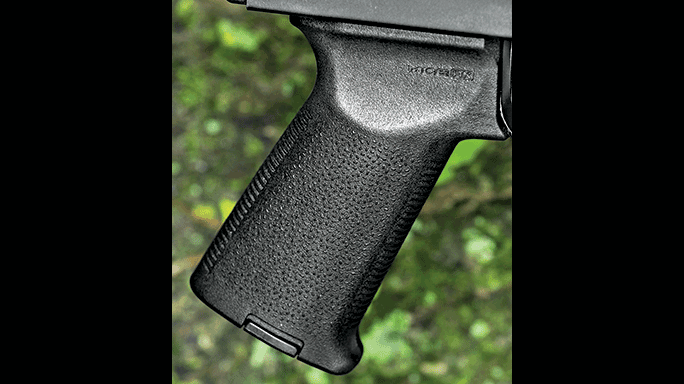 6 of 6
AmerAKan Steel: Destructive Devices Industries’ DDI-47 Rifle
The polymer Magpul MOE AK grip is textured for a positive hold, and it can also be used as a storage compartment. 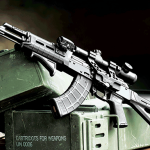 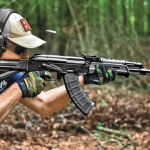 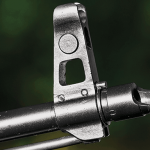 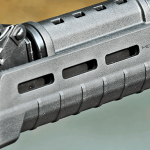 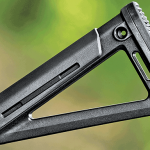 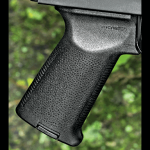 Inaccurate, crudely made relics of the Cold War enjoyable for plinking but impotent by comparison to the AR platform. This has been the general (and unfair) consensus on AK-style carbines within the shooting world for decades. Certainly, pockets of resistance in the form of collectors and enthusiasts existed, but for the most part, semi-auto AKs served the role of cheap, knock-around rifles for countless farmers, plinkers and other budget-minded shooters.

While these statements are hyperbolic, the average AR-15 still runs circles around the AK in terms of accuracy. At least that was the case until a relatively unknown arms-maker, Destructive Devices Industries (DDI), unleashed its take on Mikhail Kalashnikov’s namesake—the DDI-47.

Chambered in the Warsaw Pact intermediate-power 7.62x39mm, the DDI-47 is a true-to-form stamped AKM clone. It includes many familiar features found on other AKM carbines, like adjustable post and notch iron sights, an oversized safety lever and the iconic slant muzzle brake. The brake covers standard 14×1 LH threads, so shooters can use any muzzle device designed for use with standard AKM/AK-47 carbines.

My test model of the DDI-47, specifically the “DDIAK47SFMM,” ships with some less common, though mil-spec, features, such as its steel, ventilated gas tube. Some aftermarket parts include the Tapco G2 trigger assembly, which helps the rifle achieve 922r compliance. This same trigger setup also prevents the “trigger slap” associated with some semi-auto AK rifles.

Other preferable features include the dimpled magazine well, bayonet lug and included cleaning rod. While only the dimples affect the rifle’s performance, the inclusion of a bayonet lug is a welcomed addition—one that AK enthusiasts would bemoan if absent.

Like all civilian avtomat rifles, the DDI-47 is a rotating-bolt, gas-operated, long-stroke piston-driven, semi-automatic carbine that feeds from detachable box-type magazines. This robust operating method is renowned for its reliability, simplicity and incredible durability. It’s also partially responsible for the persistent myth of inaccuracy that plagues AK-style rifles and carbines.

Where short-stroke piston-driven rifles separate the piston from the bolt, long-stroke models combine the two. While this makes for a remarkably reliable setup, it’s also detrimental to consistency and thus accuracy. This is because the hefty combination of bolt carrier group and piston violently travels back and forth in the rifle during the operating cycle. Since the piston rides in a gas tube that makes contact with the barrel, it alters the harmonics of it whenever it moves.

Several solutions exist for this issue, but they are not without their downsides. For instance, one solution would be to install a heavier barrel that would be less affected by this movement. The downsides would be vastly increased weight and a forward-shifted point of balance.

Another solution is to simply create a more accurate, rigid barrel. That way, the system will still influence the consistency of the rifle, but by starting off with a more accurate carbine, the effects won’t be as drastic. DDI accomplishes this by using a high-quality, American-made barrel coated in a proprietary nitriding finish known as Fennocite. While the exact details of the process are a trade secret, it offers unparalleled corrosion resistance and heat dispersion. The results? In my experience, one of the most accurate AK carbines on the market. Paired with Hornady 123-grain SST ammunition, the DDI-47 produced groupings that rival those of most mil-spec AR-15s.

Upon handling the DDI-47, I noticed that the rivets were perfect, the sights were arrow straight, and there were no undue gaps between the furniture and receiver. DDI achieves these results the best way possible—by assembling every single rifle by hand.

This attention to detail is evident the second a shooter picks one up. The finish is perfectly even, and the carbines feel rock solid without being needlessly heavy or imbalanced. Their choice of furniture is unorthodox, but in practice an excellent decision. Collectors may scoff at the notion of putting American-made Magpul pistol grips and handguards on a factory AK, but pragmatists will be impressed. In fact, Magpul’s new MOE AK furniture—including the handguard, stock and pistol grip—gives the rifle even greater tactical flexibility. The handguard on the DDIAK47SFMM features M-LOK slots that allow shooters to attach accessories or rail segments without using an ungainly railed, metal handguard.

The pistol grip features an integral storage compartment that can accommodate spare batteries or a broken casing extractor, for example. The Magpul buttstock features dual sling attachment points—one for a QD sling, the other for a traditional one. It’s also markedly lighter than standard Warsaw Pact versions and is all but impervious to the elements.

The aesthetic departure from more traditional designs demonstrates that DDI isn’t concerned with simply creating another AK clone, but a better one. This is further reflected in the rifle’s use of a rugged combination of KG GunKote and Fennocite versus a standard enamel coating over some form of Parkerization.

In testing, the DDI-47 tore through four different varieties of 7.62x39mm ammunition without so much as a hiccup. While it showed a clear preference for Hornady SST ammunition in terms of accuracy, more budget-minded loadings from Wolf, Tula and Red Army Standard were still more than combat accurate.

To squeeze every last ounce of performance from the carbine, a Midwest Industries 30mm scope rail was used in conjunction with a Hi-Lux CMR-AK762 scope. The pair was mounted on the DDI by means of the included mil-spec side rail. This combination provides one of the lowest possible mounting solutions for any AK/AKM carbine.

It also proves that DDI can build a rifle with a laser-straight rail, since the margin of error for successfully mounting the Hi-Lux is very narrow. This is demonstrative of the level of precision employed in the DDI-47’s construction.

Since AK magazines can vary greatly in dimensions and tolerances, I tested the DDI-47 with several makes of common magazines. Romanian steel magazines wobbled ever so slightly during testing, while polymer magazines locked up without issue and did not budge once inserted. Commercial steel magazines from Korea ran at 100 percent but did experience some magazine wobble, as they appeared to be out of spec. The magazines locked up without excessive force, and the DDI-47’s mil-spec mag release was easy to engage.

The DDI-47 didn’t suffer any malfunctions regardless of magazines used. This includes Red Dawn Bakelite magazines, Bulgarian Circle 10 polymer magazines and, of course, the Magpul AK PMAG included with the rifle. The DDI-47 was relentlessly reliable.

Shooters familiar with AK rifles will find no surprises with the DDI-47’s felt recoil. It lands somewhere between a hot 5.56mm round and a light .30-30, neither of which are terribly powerful or unmanageable. Compared to standard wooden-furniture AK rifles, the DDI-47 has slightly more felt recoil due to its reduced overall weight, but the rubberized buttpad on the Magpul stock easily compensates for this.

The slant muzzle brake also aids in recoil reduction, but not to the same extent as compensators found on later AK models such as the AK-100 series. Still, since it uses a common thread pitch, shooters can swap out the slant brake for whatever muzzle device they desire. Whether shooters decide to install a more aggressive brake or utilize the included one, they’ll find that the AK’s reputation for recoil is greatly overstated by shooters with little or no familiarity with the platform.

In terms of practical application and accuracy, the DDI-47 makes both an excellent plinker and ranch rifle. The 7.62x39mm is a very capable cartridge, but within its known range limitations. Assuming a 50-yard zero, the 7.62x39mm round will drop a full 6 feet at 450 yards—approximately the height of an average man. This is why the Soviets developed 7.62x39mm BDC-equipped optics for use with the cartridge—optics like the PS0. Unfortunately for modern shooters, the optical clarity of this series of scopes may not be up to their standards. The good news is that more optics makers have begun to offer scopes with 7.62x39mm bullet-drop-comensating reticles, and existing scopes designed for the 300 BLK can also be used.

Overall, the DDI-47 is a high-quality, affordable AK. It may not be adorned in traditional wooden furniture or have a mil-spec finish, but it aims to be much more than just an average Kalashnikov clone. Whether you’re looking for a first AK rifle, a survival carbine or a plinker that doesn’t quit, the DDI-47 is a great choice. 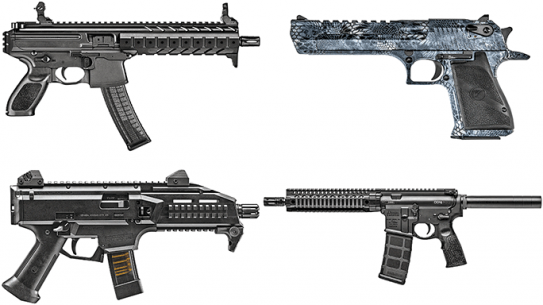