0
SHARES
138
VIEWS
Share on FacebookShare on Twitter
Caldwell’s Shootin’ Gallery provides hours of shooting fun and training for new shooters, and it helps old hands with a quick tune-up for fast-moving small game targets, too.

Early-season squirrel hunting is a warm-up in more ways than one. A week into the season and temperatures were still hitting daytime highs in the triple digits. The only way to get some relief and comfortably catch bushytails feeding in the hickories was to hunt in the mornings.

I had a new .22-caliber Marlin XT-22 bolt-action and a Trijicon 1-4X AccuPoint scope that needed a new partner, so it made good sense to mount it for squirrel hunting. After bore sighting, I loaded the magazine with Winchester Dynapoints and made final adjustments to strike dead-on at 40 yards.

The next morning found me sitting at the base of a hickory tree that had produced its share of bushytails over the past three years. Still dark, I heard frantic gnawing overhead as shards of hickory nut began hitting the leaves just feet away. A couple of minutes later, I heard the unmistakable sound of leaves rustling overhead as another squirrel landed in the canopy overhead from an adjacent tree. By the time I had enough light to see to shoot, four squirrels were feeding within range. Two quick shots had the same number of squirrels in the bag. A third made a break for it and I put the post on him as he paused in an adjacent tree.

By the time I had enough light to see to shoot, four squirrels were feeding within range. Two quick shots had the same number of squirrels in the bag. A third made a break for it and I put the post on him as he paused in an adjacent tree.

Nearly 20 minutes passed as I sat there not moving, not even retrieving the squirrels I had shot. Another squirrel moved through the canopy toward my hickory. When it settled in and started to feed, the limb-hugging tree rat I had in my sights relaxed enough to start moving and feeding again. I put the tip of the Trijicon’s illuminated post on the squirrel’s head and squeezed the trigger. I worked the bolt and switched to find the newcomer in the scope before the other one hit the ground, tagging my fifth bushytail.

The morning warmed quickly and the action slowed with it. To pick up the pace, I started stalking and listening for feeding squirrels. The Marlin XT-22 carries well, as I spent the next two hours covering ground. The local squirrel population had other food sources: white oak acorns and walnuts. Instead of feeding in the canopy above, they seemed to prefer the deeper shade of the forest floor to find fallen mast. That made them easier to hear than see. I had to slip into close range to find them sorting through the duff for acorns amid thick brush. Most shots were less than 15 yards, but the AccuPoint picked them up well and allowed the Marlin to nail three more with headshots. The temperature made me call it quits, since skinning and getting my game on ice were my now at the top of my to-do list. 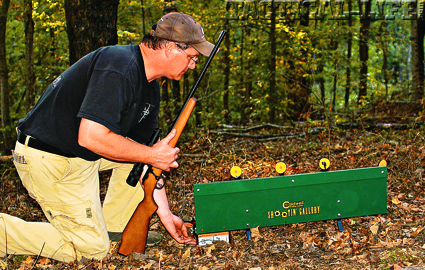 Marlin’s simple hardwood stock on the XT-22 helps keep the cost low on what should become a great starter gun for youth and novices alike. 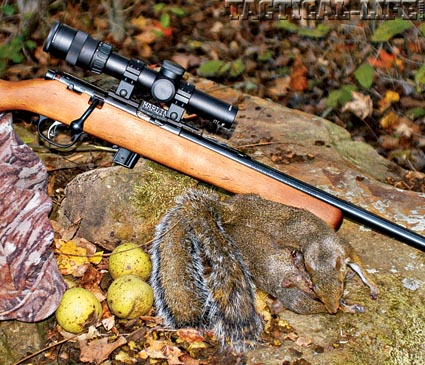 The XT-22 is plenty accurate. Langston found that for bagging the daily limit, the Marlin was more than adequate.

All-Around Rimfire
Introduced at a recent gun show, Marlin’s XT line of rimfire rifles is perfect for target practice and small game hunting. They come in several different models, with four- or seven-shot clip magazines or 12-shot tube magazines; synthetic, hardwood or laminated stocks; ramp sights, hood sights or fiber-optic sights. All of them have Marlin innovations like the Pro-Fire adjustable trigger and Micro-Groove rifling. The XT-22 series comes chambered in .22 Short, .22 Long, .22 Long Rifle or .22 Winchester Magnum Rifle (WMR). The Marlin XT-22 I was evaluating was the seven-shot model with a hardwood stock.

I have long found Marlin’s Micro-Groove rifling quite adequate for producing good groups on paper, but my favorite part of this rifle its trigger. The Pro-Fire adjustable trigger is similar in design to the Savage AccuTrigger and produces a crisp let-off. I shoot a Savage AccuTrigger frequently on centerfire target rifles, so I’m used to their feel. The Marlin’s Pro-Fire trigger felt familiar and broke predictably. Checking the trigger pull, it measured 3.13 pounds out of the box.

A couple of weeks before squirrel season opened, I started my search for a set of mounts for the new .22. The Marlin XT-22 has traditional tip-off grooves to mount 0.75-inch scopes, but thoughtfully, Marlin also drilled and tapped the top of the receiver to give shooters the choice of better quality mounts. I started surfing and located Diversified Innovative Products, Inc., from Post Falls, Idaho. They offer a solid, one-piece mount featuring a Picatinny rail that fits this rifle. With this setup, the choices for mounting optics increase exponentially.

The DIP 15014 easily converts the bolt-action rimfire rifle’s dovetail so you can use just about any Picatinny- or Weaver-style ring and accessories. The Picatinny rail allows you to use quick-release rings so you can swap scopes between rifles. The two additional slots past the end of the receiver help with mounting long eye relief scopes for shooting from the prone position. The DIP mount is made from tough aircraft-grade aluminum and then black anodized for a durable finish. This mount installs easily with the four supplied #15 Torx screws for drilled and tapped receivers, but it fits a .22 dovetail so tightly that it can be used on a non-drilled and tapped receiver with four set screws. The model I installed had “MARLIN” laser-engraved inside the ejection port. All of DIP’s products are made from solid U.S. billet, instead of Chinese extrusions. Additionally, DIP offers a 25-MOA mount to allow a 300-yard zero for long-range shooting. 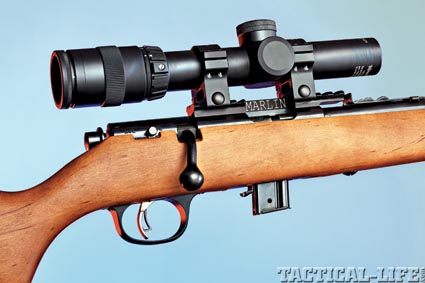 A .22 for you! The Pro-Fire adjustable trigger adds to accuracy by helping to provide a crisp and clean trigger pull. 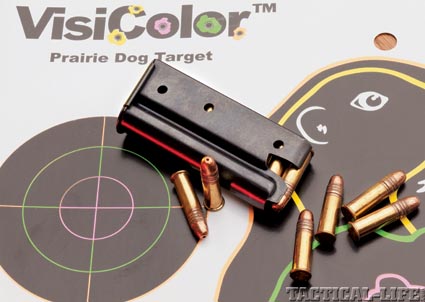 The XT-22 comes with either a four- or seven-shot magazine, or a 12-round tube mag. The seven-round mag worked well. Oleg Volk Photo

Feeding The Little Beast
Evidence in hand of the XT-22’s adequacy as a squirrel killer, I wanted to spend some time with a few different loads to see what it preferred. Working with ammo on hand, I shot three “economy” loads and one subsonic load I had left over from testing another rifle. I fired five-shot groups at 50 yards with the Trijicon AccuPoint 1-4X scope set at its highest power setting. Testing was conducted from a sturdy bench with a Bulls Bag rest. Since I ran the test with a low-power scope, it can be assumed that using an optic with a higher magnification could yield tighter groups.

Winchester’s Dynapoint .22 LR was the first load tested. I sorted the ammo into groups based on rim thickness. Since the .22 rimfire round headspaces on the rim, it makes sense to raise accuracy by sorting ammunition that headspaces the same from shot to shot. Measuring rim thickness with a device such as the Hornady’s Lock-N-Load Rimfire Thickness Gauge will show that rim thickness commonly varies up to 0.0025 inches. When I sorted ammunition with the Hornady gauge, I categorized each round according to its largest measurement around the rim’s circumference. Since the thickest part of the rim will contact the chamber mouth first, that’s the reasoning behind my preference in the ammo sorting process. This load produced a group average of 0.961 inches, while the smallest group measured 0.350 inches.

The Marlin XT-22 is a fine plinking rifle. I’ve had a lot of fun with Marlin’s newest rimfire, and its accuracy is well within my minute-of-squirrel-skull minimum for a handy woods rifle. Rest assured, the hunt previously mentioned wasn’t my last hunt with this rig—not by a long shot.