The farther away we are from the enemy, the bigger the hammer we can use on the bad guys. Thus, handguns grew to be considered merely the weapon of the military police and staff officers making fashion statements. Not anymore. The current war is increasingly up close and personal, set in an urban environment with battles raging down to a few feet rather than hundreds of yards. But since training commands are usually a step behind the evolving battlefront, the military is increasingly looking outside for assistance in training its troops how to use handguns as an effective weapon. Enter Gunsite.

Gunsite has a long standing training relationship with the military, particularly the Spec Ops community. With the increased demand for more realistic training, more units are using Gunsite’s facilities and staff to enhance their pre-deployment training.

Gunsite owner Buzz Mills, Director of Operations Ed Head, and their range masters are clearly very pleased to hear of their students’ successful engagements. But their dedication to our warriors goes much farther. Starting with the War on Terror, Buzz and Ed decided to offer free handgun and carbine classes to our returning veterans as a gesture of thanks for their service. Recently, I was honored to join such a group, as an observer/student for a Handgun 250 (Gunsite’s Basic Handgun 5-day class).

In Good Company
I claim neither special skills nor talents as a pistol shooter and was ready to learn, yet the most memorable part of this class was not the shooting, but the company I was honored to be in. Troops from Army Special Forces, the Rangers, Navy EOD and men from the Wounded Warriors Project filled the class roster. Our three representatives from Special Forces were understandably very cautious in opening up and interacting with the rest of the class. When the class started and I introduced myself as a writer, these three characters did their best to melt into the woodwork to avoid publicity of any kind. Yet when my faulty knee gave out on me on the fourth day of class, the first assistance I received was from our very gentle SF medic and another to-remain-nameless SF member. I cannot describe how protective yet amusing these two men became as they examined my knee and gave me my marching orders for protecting it for the remainder of the class.

Our Ranger students exemplified the contrast between the Special Forces persona and that of the Rangers. Boisterous and hard-charging, the Rangers showed more enthusiasm and energy than the remaining entirety of the class as they pushed themselves to be faster, smoother, and more accurate. Yet despite the raucous good humor of the Rangers, it was the Wounded Warriors Project team that captured the attention and admiration of the entire class.

Heroes With Handguns
The Wounded Warriors Project is just one of many service organizations that assist our wounded veterans as they return home to military hospitals. The wounded veterans of our class enthusiastically endorsed this particular organization for their amazing efforts. Master Sergeant Daniel Robles, a double amputee and thoroughly kick-ass Senior NCO, had nothing but praise for the Project. In his experience, the Project made the most concerted effort to truly know each of the wounded soldiers and to help them in every way possible. Even the Project chaperone, Ryan Pavlu was a disabled veteran. A remarkable man, Ryan has worked for and with the Veteran’s Administration so he knows how to guide the veterans thru the system. Every day of the class, he would drive the group in and hang around to help them.

Rather than stay at a local motel, I chose to commute to Gunsite everyday from my home in Flagstaff along with my brother and another veteran. Although the conversations during the hour-long drive varied, we never failed to discuss the wounded veterans in the class. Admittedly, I am a wimp who cries at Disney movies, but my brother is a gang prosecutor who has seen more than his fair share of horrors. Still, when we spoke of our wounded classmates, all of us were awed by their indomitable spirit and had trouble controlling our emotions.

Despite their obvious pain and clearly serious injuries, our wounded classmates were all heart. They never complained, they rarely slowed down, and they always demonstrated an amazing sense of humor. As a supervisor once commented that I “had all the tact of an advancing Mack truck,” I felt free to inquire about their circumstances and joke with them about their injuries and how it should affect their shooting abilities. Fortunately, these guys took my comments as intended and joked back while being completely candid about their situations. Other students were also talking openly with them. My observation during these conversations gave me the impression that more important than the shooting, our wounded classmates simply enjoyed being among their fellow warriors once again, especially as they were treated as equals. Personally, I never treated them as equals for they were not my equals, they were my seniors. As such, I hope I always showed them the respect and deference they deserve.

Respectful Is As Respectful Does
And speaking of respect, it is about time I mentioned our Gunsite instructors, Chris Weare, Larry Landers, and Bill Young. The staff of Gunsite has always had the been-there-and-done-that resumes. This cadre was no different. Chris Weare is a Vietnam Marine Force Recon veteran and a 30-year veteran of the Orange County, California Sheriff’s Department. De­­spite years of playing with “suspicious packages” as a bomb technician, Chris still has all of his fingers and toes. In demonstrating particular drills, Chris proved his abilities as a shooter and as a world-class instructor.

Did you know the average life expectancy of cops who work long-term undercover assignments is significantly lower than most cops, due to the incredibly high level of stress they constantly operate in? You would not know that by working with Larry Landers, an Arizona Dept. of Public Safety cop for more than 30 years. With a lot of under­­­­­­­cover experience, Larry is still managing to work full days as a Gunsite instructor in the 100-plus degree Arizona desert, where his “real world” experiences help to reinforce lessons for his students.

Our final instructor, Bill Young, was not a traditional Gunsite instructor in the sense that he did not work in law enforcement. However, he has been a Gunsite student and instructor for many years and he has proved his mettle as a two-time terminal cancer survivor. Despite his horrific medical history, Bill kept up the pace out on the range and was always showing his appreciation for the veteran students with his gracious sense of humor.

The Meaning Of Heartfelt
Almost all of the Gunsite staff found the time to stop by the class and thank us for our service. This was always a humbling experience because their military and/or law enforcement service was equally, if not more, impressive than ours. One special guest was Bill Mahn, a WWII Marine Raider who also served in Korea at the Chosin Reservoir. After leaving the Corps, Bill continued on to a distinguished law enforcement career and as a martial arts master. This legend was so humble that he did not even mention his background when visiting the class; he just shook hands with each student while thanking us for our service, and then tried to disappear. Fortunately, Rangemaster Chris Weare intercepted him before he escaped and told us about Bill’s personal history. In the service, I was never impressed by brass stopping by to screw up my schedule — but men like Bill are a completely different story.

Outside of Gunsite, several vendors also expressed their gratitude by sending donations to the class along with letters of thanks.

The most generous gift of all was from our instructors and Gunsite. The time and effort that they put into this class was on a without-pay basis. Additionally, Ed Head announced on the final day of class that the Wounded Warriors Project would be welcome to join any class at anytime and always for free — a very generous offer that clearly expressed the respect that all of us involved in this class felt for the Project and the wounded veterans. I wish to add my thanks to Gunsite and to all of our veterans, particularly those who will live with the constant pain of their injuries and carry the scars of their service for the rest of their lives. Thank you. For more information visit: WWP; woundedwarriorproject.org or Gunsite; gunsite.com. 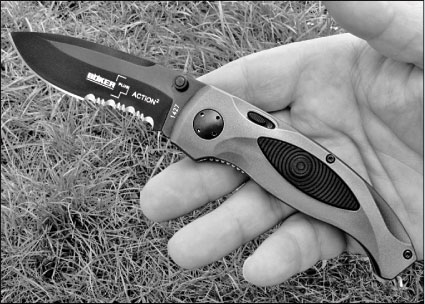 The farther away we are from the enemy, the bigger the hammer we can…