WASHINGTON – Defense Secretary Robert M. Gates yesterday charged his department to develop plans to take action on 64 of the 95 recommendations for changes to the U.S. military reserves made by a congressionally mandated commission earlier this year.

The department already has acted on 18 of the recommendations made in January by the Commission on the National Guard and Reserves, which was convened in 2004 to review and recommend changes needed to move the reserve-component force from a Cold War-era strategic reserve to an operational reserve fully integrated with its active-duty counterparts.

“The Congress, the commission and the department all recognized that the National Guard and Reserves are integral to the total force and have assumed a greater operational role in today’s force,” Gates wrote in a memorandum he signed yesterday. “The department greatly appreciates the support of Congress and the diligence of the commission for its comprehensive review and recommendations for improving the National Guard and Reserve.”

The onus now falls mostly on mostly the chairman of the Joint Chiefs of Staff, the service secretaries, the undersecretaries of defense for policy and for personnel and readiness, the chief of the National Guard Bureau and other senior leaders to develop plans to implement the recommendations. Gates has given them 25 days to come up with their plans.

“I would characterize the timelines as very aggressive, and certainly the secretary wants to turn this over to the next administration with all of the actions in place and moving,” Thomas F. Hall, assistant secretary of defense for reserve affairs, said in an interview at the Pentagon last week.

Key actions that will come from the plans will be further clarification of the reserve components’ role in homeland defense and civil support, the institutionalization of their operational role in future combat, improved personnel management and enhanced support for Guardsmen and reservists, their families and their employers.

“The Guard and reserve will continue to have their civil defense missions and this is a recognition of the importance of these missions,” Pentagon spokesman Bryan Whitman told reporters today.

Whitman pointed out that since the global war on terror started, 200 provisions in law have affected the reserve components. “The commission’s recommendations are largely in line with what the department broadly was doing on a couple of pretty important fronts,” he said. “The commission’s report basically validates the direction in which the department has been headed for a number of years.”

The first front is changing the reserve components from a strategic reserve to an operational force. “As a result, we have greatly increased funding for the reserve components, and we’ve rebalanced the Guard and reserves.” During the Cold War, for example, there were a large number of artillery battalions in the National Guard. Those soldiers have been shifted into more critical units, such as civil affairs and military police.

“As part of making the reserves part of the operational force, we’ve instituted the one-year mobilization with a minimum 90-day notification [of deployment],” Whitman said. In fact, the average notification now is 270 days.

With regard to funding the reserves as an operational force, Gates drew attention to commission recommendations 29 and 43 in his memorandum. Recommendation 29 called for the services to budget for, and Congress to authorize funding for, readiness requirements for both reserve homeland defense and overseas missions. Gates has called on the service chiefs to develop plans for funding reserve component operational readiness requirements not already included in their budgets to be considered in the fiscal 2012 budget review.

Recommendation 43 called for DoD accounting of reserve-component procurement and funding and the ability to track the delivery of equipment to reserve units. Gates said no consensus has been reached on how to add this to the DoD system. He has called on the service chiefs as well as the Defense Department’s acquisition, technology and logistics office, the comptroller’s office and other senior officials to develop a plan for accounting and tracking reserve-component equipment.

To improve personnel management, the commission recommended that DoD implement a combined pay and personnel system. From the start of its heavy deployments in both wars, the National Guard, especially, has found itself foundering with pay problems and personnel glitches as guardsmen moved from a state-based pay system to the federal pay system and then back.

The department is now in the process of launching the Defense Integrated Military Human Resources System, which promises an integrated, multi-component personnel and pay system. The Army is slated to implement the program in March, followed by the Air Force in October. The date for the Navy transition to DIMHRS has not been set, and the Marine Corps already has an integrated pay and personnel system.

Officials said they hope the system will provide a seamless transition between active-duty and reserve status. Once on line, the Web-based system can be accessed anywhere and will have all personnel data loaded electronically, they said.

To ease those pay problems, the commission proposed slashing the 29 duty status codes reserve forces use to calculate pay and benefits to just two: on or off duty. But, because pay and benefits for reservists are tied to the different status codes, reducing them to only two could cause a pay hardship, officials said.

Streamlining the pay codes has fallen to the Defense Department’s office of personnel and readiness, along with the service secretaries, the chairman of the Joint Chiefs of Staff, the National Guard Bureau chief and other top leaders to resolve. Hall estimated that they likely will be narrowed down to about eight status codes that will not affect pay or benefits for reservists.

“Will we ever get to two – on duty and off-duty? Probably not,” Whitman said today. “But certainly, we would like to simplify and make this continuum of service not so complicated.”

In health care reform, the secretary has ordered a comprehensive review of customer service and availability of the Defense Department’s Tricare health care program, especially the services provided to those who do not live near a major military hospital. Many reservists live in outlying areas, sometimes hundreds of miles from the nearest military facility. Hall said more local doctors, clinics and hospitals need to accept Tricare as a provider.

Gates also called for the department’s personnel and readiness office to assess the feasibility of allowing both active and reserve servicemembers and their families who do not live near a military hospital the option of enrolling in the Federal Employee Health Benefits plan used by the department’s civilian employees. DoD officials also are looking at possibly paying a stipend to the reservist who does not elect to use Tricare as a provider. It likely would not be greater than the cost of providing Tricare access, they noted.

Also, the commission called for, and Gates supported, additional funding for reserve-component family support programs, extended transition assistance, and a standardized reintegration process for all servicemembers returning from deployments.

The 11 recommendations that Gates did not support dealt primarily with personnel management and accounting.

Hall, who led the DoD working group, called its efforts “exhaustive” as it examined the recommendations that affected reserve component funding, equipping and organizing.

“I’m very pleased with the process,” he said. “It was all-encompassing. We took everybody’s view and produced a document that is remarkable for its consensus.”

Hall said the implementation of these recommendations brings the traditional reserve role of the “weekend warrior” to an end and moves the U.S. military closer to a true total force.

“It means transition from a strategic reserve to an operational reserve — mission almost complete,” Hall said. “I say it’s almost complete because this is a major milestone in that transition.”

Hall called the past seven years a historical time for the military, and said more than 200 provisions in the law that affect the reserve components have changed.

“We have truly made our Guard and reserve operational forces working with the active duty. We simply cannot meet the mission of our nation without that 46 percent in the Guard and reserve. They perform magnificently,” he said.

The chairman of the Commission on the National Guard and Reserves, retired Marine Maj. Gen. Arnold L. Punaro, praised the decisions by Gates in statement released yesterday.

“The winners today are the men and women in uniform, their families, their employers, and the citizens of the United States,” Punaro said. “All will benefit from Secretary Gates’ landmark decisions.” 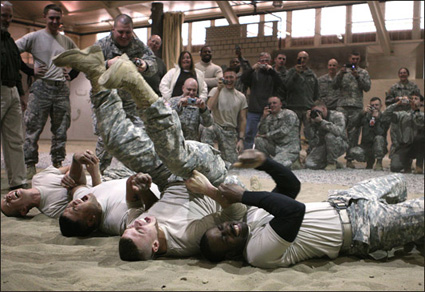