“If approved, I think it will change the way we manage the Department of Defense,” Hale said during a Pentagon briefing.

The budget includes $533.8 billion in the base budget and $130 billion to support overseas contingency operations, primarily in Iraq and Afghanistan.

The budget, 4 percent more than that for fiscal 2009, is 4.3 percent of the U.S. gross domestic product.

The proposed 2010 base budget represents an increase of $20.5 billion over the $513.3 billion enacted for fiscal 2009. The 4 percent increase represents 2.1 percent real growth after adjusting for inflation, Hale said.

The budget is firmly rooted in taking care of the department’s most precious resource – its people. “This is the highest priority for our nation,” Stanley said. “It’s strongly supported by all the service chiefs — clear recognition that the strength of our nation is based on the ability of our people to go forward and defend our way of life.”

The $663.8 billion request proposes a 2.9 percent pay raise for servicemembers and a 2 percent raise for Defense Department civilians. There will be more servicemembers, too. The budget fully funds the increase in Army and Marine end strength and halts decreases in the Navy and Air Force.

The request also takes care of military families. It fully funds the military medical accounts with $47 billion, and provides $11 billion to fund military housing and support programs for single and married servicemembers.

The budget also provides $3.3 billion for care for wounded, ill and injured servicemembers and their families. If approved, this money would go toward creating an expedited disability evaluation system, 12 more Wounded Warrior facilities and help for servicemembers with post-traumatic stress disorder and traumatic brain injuries.

Gates wants to reshape the force, and this budget begins the process. The aim is to build a military to fight the wars America is most likely to fight – irregular and unconventional. Gates has said the nation needs a balance of forces, and the Defense Department must modernize with this balance in mind.

The proposed budget includes additions to help to build partnership capability and train and equip allies. The budget request seeks to add 2,400 special operations forces who are key to irregular and unconventional war.

Helicopter aviation is a premium in the wars today, and the budget calls for training 150 more crews starting in fiscal 2010. The budget calls for buying littoral combat ships and a joint high-speed vessel that will serve well in irregular warfare.

“And we’ve stopped the growth of Army brigade combat teams at 45, rather than going to 48,” Hale said, “to fully man these units within a given end strength, so that they’re ready at a moment’s notice to fight.”

Modernizing conventional capabilities is also important. The budget ends the F-22 fighter jet program at 187 aircraft. “We believe that is enough of these high-capability aircraft to meet the high-end threats,” Hale said. The budget also ends the C-17 airlifter program at 205, which, with the C-5 Galaxy aircraft, provides enough lift for the force, officials said.

The department will beef up cyber-defense capabilities and increase intelligence, surveillance and reconnaissance capabilities. “We’ll make a variety of increases; for example, in our unmanned aerial vehicle programs,” Hale said.

The comptroller said he hopes the pending Air Force aerial refueling tanker purchase will remain on pace for contract award by spring 2010.

The Army’s Future Combat System will be restructured, with its technological spin-offs in network-centric warfare going to all units, but the vehicle portion being terminated, Hale said. “The Army will relook at that program and start it again at some point, with that thought in mind and taking into account the more than $25 billion we’ve spent buying mine-resistant, ambush-protected vehicles,” he said.

The budget gets away from asking for emergency supplemental funding for operations in Iraq and Afghanistan. “We’re asking for $130 billion to fund wartime activities in fiscal year 2010 [in the base budget],” Hale said. Eighty percent of it or so is for operations – added tank miles, paying mobilized reserves and so on.

“This request is where you’re going to first see the swing of not only dollars or resources, but [also] combat capability, from the Iraq theater into the Afghan theater,” Stanley said. “Actually, you’ll see in this request that the money requested here, about $65 billion for Afghanistan, actually exceeds the $61 billion that we’re requesting for Iraq.”

Supporting troops in the field is the backbone of the budget request. Building an all-terrain vehicle version of the mine-resistant, ambush-protected vehicle for operations in Afghanistan is part of the $130 billion war-funding portion of the request.

Another $7.5 billion is slotted to train added Afghan soldiers and police. The overseas contingency operations fund also has $1.5 billion for the Commanders’ Emergency Response Program, and $700 million for the Pakistani Counterinsurgency Capabilities Fund.

The budget calls for reducing the percentage of contractors working in the department from 39 percent today to 26 percent, Hale said. The budget also funds more manpower positions for contracting officials. 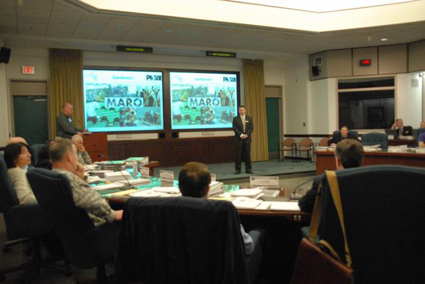