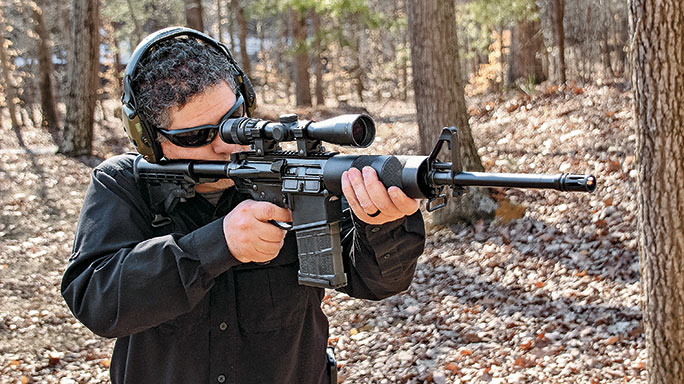 1 of 7
Photo by Rob Jones
DTI .308: Del-Ton’s Heavy Hitting Rifle
On the range, the Del-Ton DTI .308 handled well and was light on recoil despite weighing only 8 pounds, which is considered lightweight for a .308/7.62mm rifle. 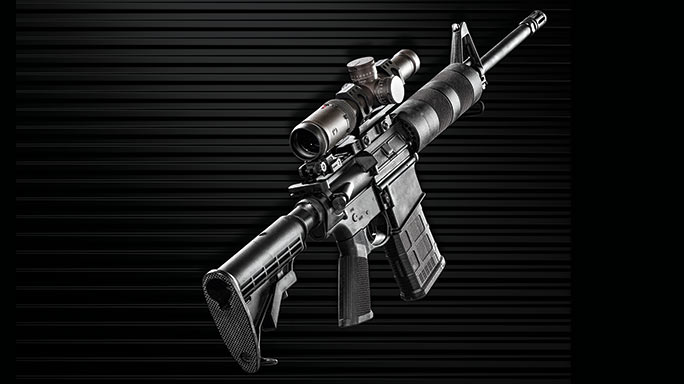 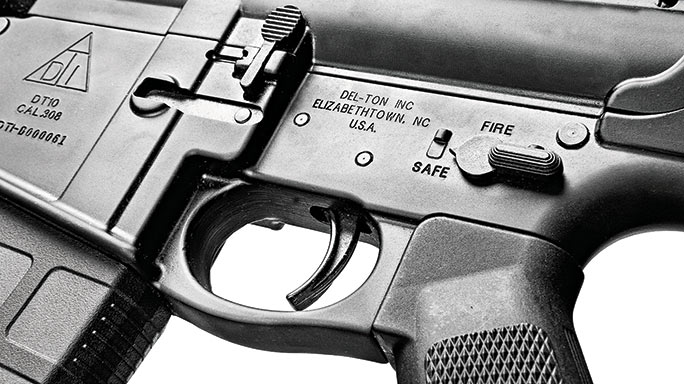 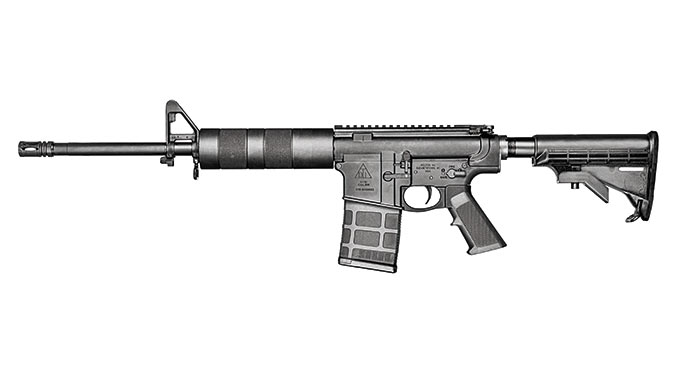 4 of 7
Photo by Rob Jones
DTI .308: Del-Ton’s Heavy Hitting Rifle
With its optics-ready top rail and round, free-floating, aluminum handguard, this Del-Ton rifle was built to appeal to hunters, but it can easily be adapted to a tactical role, too. 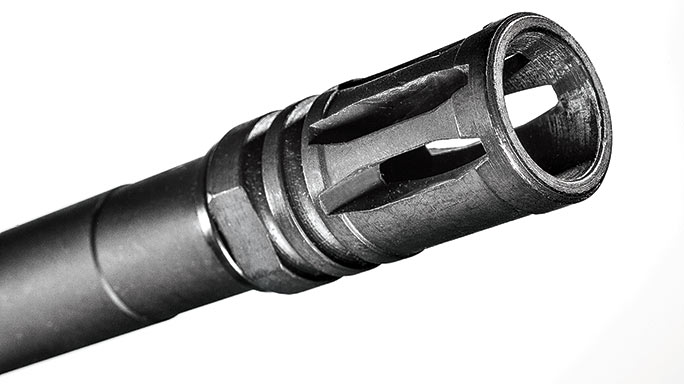 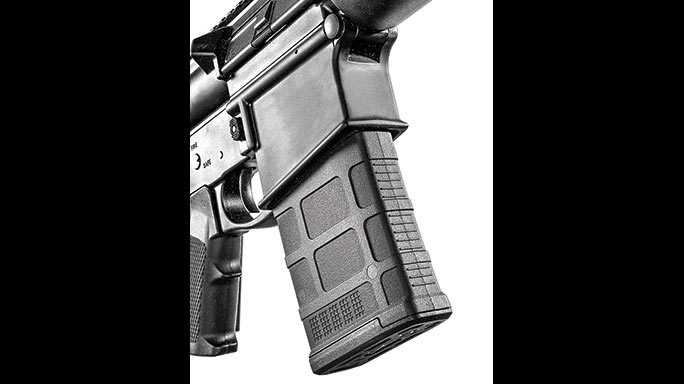 6 of 7
Photo by Rob Jones
DTI .308: Del-Ton’s Heavy Hitting Rifle
Del-Ton built the DTI .308 to accept a number of popular magazines, including those from Magpul and Lancer. One reliable 20-round Magpul PMAG is included with the DTI .308 rifle. 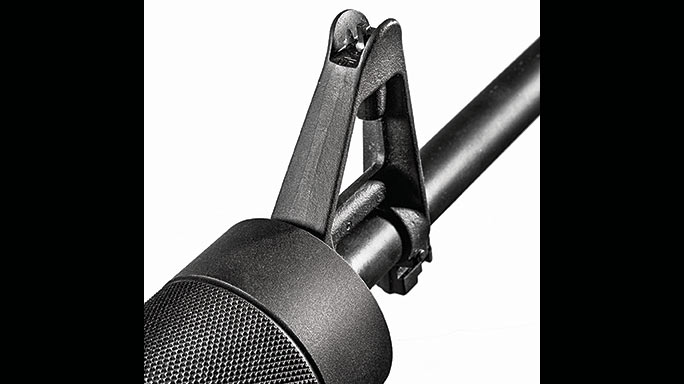 7 of 7
Photo by Rob Jones
DTI .308: Del-Ton’s Heavy Hitting Rifle
Del-Ton equips the DTI .308 with an elevation- adjustable A2-style front sight post that should be familiar to many shooters. 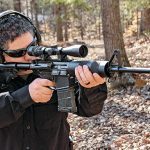 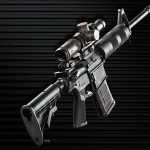 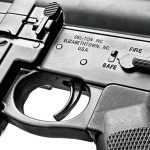 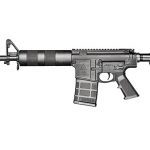 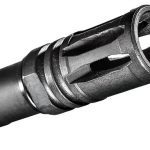 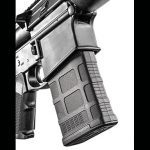 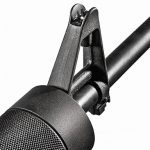 I have had the good fortune of testing and reviewing several AR-platform rifles from Del-Ton over the years, and they have several things in common: impeccable build quality, solid accuracy and absolute reliability. They were also all chambered in 5.56mm NATO—that is, until now.

The new Del-Ton DTI .308 rifle is the company’s first foray into the big-bore AR market, and the company has done so with the intent of appealing to hunters and those who want more power when it counts. It is a fact that the number of AR rifles chambered in .308 Winchester/7.62mm NATO has exploded recently. However, the 7.62mm AR has not been embraced by the military to the point of standardization, and as a result there is no such thing as a mil-spec 7.62mm AR like there is for the 5.56mm variety.

The result is a mishmash of different designs with non-interchangeable parts, but the industry does seem at least to have settled on some basics, and Del-Ton’s DTI .308 thankfully fits firmly within these unofficial standards. With a few exceptions, the vast majority of 7.62mm ARs will accept Magpul and Lancer magazines, and the Del-Ton is no exception.

Parts interchangeability was one of Del-Ton’s priorities in building the DTI .308, and the rifle will accept many parts that fit standard and plentiful 5.56mm ARs, including buffer tubes, stocks, grips, triggers and safeties. This rifle also follows the now-common DPMS Gen I pattern for 7.62mm ARs, for which several manufacturers now produce aftermarket parts such as handguards.

Like most AR owners, I like to try and use my rifle as much as possible, including for hunting. ARs, despite the way they are portrayed in the media, are gaining in popularity as hunting guns more and more thanks to their versatility and ease of use as well as accuracy. Unfortunately, some states—including Virginia, where I live—require hunters to use calibers larger than the .223 Remington for big-game hunting. This makes a .308/7.62mm AR-type rifle a great option.

Del-Ton fielded enough calls for a 7.62mm AR for hunting deer, hogs and bear that the company decided to follow through. The new rifle maintains clean lines and a basic design with features that should appeal to these users, including a short overall length and a light weight for its class, making the DTI .308 easy to lug to your stand. But these same features make it also ideal as a tactical-style rifle as well if so desired.

The DTI .308 is a semi-automatic, carbine-length rifle that uses the direct gas impingement operating system. The 16-inch, chrome-moly-vanadium barrel features a heavy profile and a 1-in-10-inch twist rate to handle a wide variety of bullet weights. As a carbine, the rifle also has a carbine-length gas system. The muzzle is threaded and topped with an A2-style flash suppressor that can be removed and replaced with a different-style muzzle device or a direct-thread suppressor.

The barrel assembly features a durable and weather-resistant manganese-phosphate finish, including under the front sight base/gas block, which sometimes gets overlooked on lower-quality builds. The elevation-adjustable A2 front sight base includes a sling swivel and a bayonet lug (just in case). At the rear of the barrel, Del-Ton made sure to include M4 feed ramps to improve reliability and feeding.

Del-Ton has also done a smart thing with this rifle’s handguards. Instead of a heavy and unnecessary tactical quad-rail, the company has installed a circular aluminum handguard with an aggressively knurled texture. This design allows the barrel to remain free-floating, improving accuracy while keeping the rifle’s weight down to a minimum. The texturing also helps keep the rifle firmly in the hand even under inclement conditions. Frankly, you don’t want to add a bunch of unnecessary accessories to a hunting rifle, though the Del-Ton DTI .308 is still very amenable to customizing for more tactical uses.

The forged 7075-T6 aluminum upper receiver features a Picatinny top rail that is almost 7 inches long to comfortably mount an optic. The rifle does not come with a backup rear sight, but these can be easily installed. The charging handle is robust and easy to operate even with an optic mounted, and the upper receiver also includes a fully functional forward assist as well as a steel dust cover to keep dirt and debris out of the action when in the field. Both the upper and lower receivers are hardcoat anodized black.

The lower receiver, also forged from the same mil-spec aluminum, features an enlarged, integral triggerguard, which makes gloved use (especially on those cold mornings) much easier.

The beveled magazine well makes for easy magazine changes if needed, and the rifle features all the standard AR controls, including the magazine release, bolt catch and safety selector. The safety selector is not ambidextrous—although one could be easily installed—but it does have “safe” and “fire” markings on both sides to easily identify the rifle’s status.

The furniture on the DTI .308 is also very much mil-spec, with an A2 grip and a collapsible, M4-style buttstock. These are functional, but with so many high-quality and frankly more comfortable aftermarket grips and stocks available, I would likely upgrade these two areas. Fortunately, the buffer tube has the mil-spec diameter for a 5.56mm rifle and will readily accept any stock designed for a 5.56mm AR. It also features a heavy buffer to compensate for the heavier recoil and bolt carrier.

The bolt carrier itself is made from durable phosphated 8620 steel with a 9310 steel bolt. Both have been heat treated and plated, and the carrier interior is chrome lined for durability and corrosion resistance. The carrier key is also chrome lined and secured with Grade 8 screws that have been properly staked and sealed.

The mil-spec, single-stage trigger is not bad as far as these triggers go, and my test model’s broke at 6 pounds with quite a bit of travel. Fortunately, the rifle’s design allows for the use of any of a number of drop-in trigger assemblies for a lighter pull or a two-stage unit. This is one upgrade that is well worth the investment in terms of more comfortable shooting and enhanced accuracy capabilities.

On the range, the DTI .308 was relatively lightweight and easy to handle. At only 8 pounds unloaded, this is an impressively lightweight AR for its chambering. You certainly notice the difference in recoil between this and a standard 5.56mm AR, and the rifle requires a more aggressive forward-leaning stance in order to keep your balance during rapid-fire drills. The recoil is not at all uncomfortable or difficult to manage, however.

I tested the DTI .308 right out of the box over two days of shooting with no maintenance performed in between. I did experience two failures to eject during this process, but that is well within any break-in period and running the rifle dry. Most direct-impingement ARs prefer to run with a good supply of lubricant on the bolt and bolt carrier. This is especially the case with 7.62mm ARs in my experience.

To measure the DTI .308’s accuracy, I fired it from a sturdy benchrest at 100 yards using a Trijicon 3-9x40mm AccuPoint scope with a mil-dot reticle. Unlike other illuminated optics, the Trijicon’s reticle is fed by fiber optics and ambient light so no battery is needed. I tested three different types of ammunition to gauge the rifle’s capabilities and preferences, from a 155-grain match load to a 180-grain soft-point (SP) hunting load.

The average five-shot group size at 100 yards across all types of ammunition was under 2 MOA, which is very good for a carbine of this type. The rifle did exhibit a slight preference for the lighter 155-grain ammunition, with my best five-shot group measuring 1.16 inches. Match-grade ammunition is typically not recommended for hunting, and my preferred hunting load, the Federal Fusion 180-grain SP, still averaged just over 2 MOA.

As a dedicated hunting rifle, the DTI .308 has much to recommend, not least of which is that Del-Ton has succeeded in keeping the retail price below $1,000—something that’s not easy to do for a .308/7.62mm AR. The rifle also comes ready for use with a 20-round Magpul PMAG. And, if you are looking for an affordable .308 AR for tactical uses, the DTI .308 definitely deserves a close look.

Del-Ton started out selling AR components and accessories before it began offering complete rifles. As such, the company has a great deal of experience in customizing rifles and knowing what features will prove the most useful and popular. The Del-Ton DTI .308 is an outstanding American-made rifle with a lifetime warranty for the original purchaser. 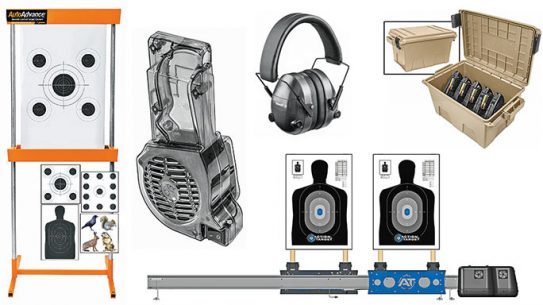 8 Pieces of Next-Gen Training Gear For the Gun Range

Top equipment to help you get the most out of your trigger time on...