0
SHARES
15
VIEWS
Share on FacebookShare on Twitter
Del-Ton put together a civilian legal version of the M16A4 rifle, modeled after the preferred battle rifle of the United States Marine Corps.  The M16A4 is a serious rifleman’s tool, and to genuinely appreciate its merits a shooter must be trained in the art of the rifle—concepts familiar to any Marine. The 20” barrel is fitted with a NATO-spec “birdcage” muzzle brake/flash suppressor.

United States Marines are a stubborn lot, a fact that has served them well in defending this nation for the last 200-plus years. Case in point, when the U.S. Army was racing to change over to the M4 carbine, the Marines clung to their M16A2 rifles. After the attacks on 9/11 and the beginning of the Global War on Terror, the Corps relented a bit and authorized an improved/upgraded version of their beloved M16A2. (Full disclosure/disclaimer: the author is a former Marine Infantryman, turned military contractor and small arms and tactics instructor. Any reference to the Corps is biased by experience. Semper FiBrothers!)

The Colt manufactured M16A4 rifle is a select-fire, or BATFE Class III weapon—making it a bit difficult to come by for those outside of military channels. Understanding that fact, I went for the next best thing. Del-Ton Incorporation (DTI) put together a civilian-legal version of this rifle for me to review herein. 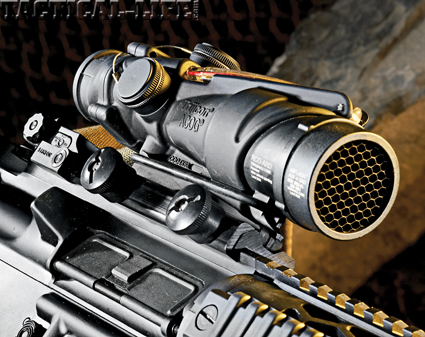 The fixed carrying handle has been replaced by a flattop receiver with removable handle, which allows for the mounting of the Marine version of Trijicon’s ACOG sight

As you would expect, the primary difference is the lack of a three-position selector lever. This Del-Ton rifle has only two settings— safe and “kill,” as my leatherneck brothers like to say. Aside from that fact, the DTI version is a pretty faithful replica. 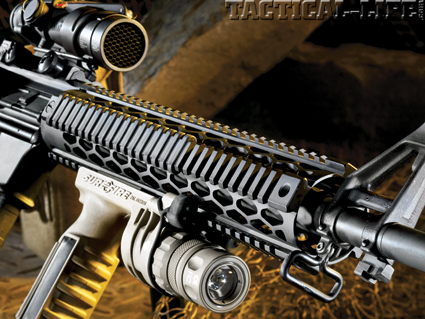 SureFire’s Vertical Foregrip LED WeaponLight M900V has right and left pressure switches with a positive on/off switch located at the base.

Starting at the top, the fixed carrying handle (don’t every let a Drill Instructor see you using it as one) has been replaced by a flattop receiver with removable carrying handle. The Corps also authorized the replacement of the standard plastic handguards with an aluminum 4-way rail system. This rail system allows the addition of battlefield-critical gear, such as visible and IR laser target designators, vertical grips (not critical but useful) and white/IR combat lights. The standard A2 front sight housing is still present with ¼-click adjustable front sight post.