With such a wide spectrum of guns, it’s sometimes difficult to classify one type as being iconic. However, that rare air is often reserved for the sub-machine gun, and even within that category one rises above the rest—the integrally suppressed submachine gun.

The king in that class is the Heckler & Koch MP5SD. For decades, this submachine gun was the cornerstone of counter-terrorism units throughout the world. Easily recognized by even rookie gun aficionados, the MP5SD is the gold standard for full-auto-capable, pistol-caliber weapons. For many reasons, this gun has gone largely unchallenged. But that has changed, as Desert Design & Development, or D3, has introduced what it believes to be a superior integrally suppressed submachine gun. Say hello to the D3-9SD.

Dubbed the “ultimate urban carbine,” the D3-9SD is a short-barreled rifle built on an AR platform that’s primarily chambered for the 9mm. The engineers at D3 have created a suppressor unit that shrouds and integrates with the barrel, creating an especially quiet weapon. The major upside to the AR platform is its familiarity of operation and ease of use. There’s almost no learning curve for using this weapon, as the manual of arms is based on the standard AR-15.

As a bonus feature, the gun runs on standard Glock-style magazines—a move that shows design vision. Glock handguns are the most popular pistols carried by law enforcement personnel across the country. This carbine is designed to complement existing Glock handguns and give law enforcement officers the tactical advantage of carrying a magazine of one caliber that can be shared between a pistol and carbine. Shooters can quickly load the extremely quiet and accurate D3-9SD carbine with the same magazines they’re already running in their G17s, G18s and G19s, for example.

The AR-15’s customizability also translates to the D3-9SD. The weapon is designed so it can use standard drop-in AR triggers, aftermarket safeties and other AR-platform furniture. The gun’s overall length ranges from 23 to 29 inches depending on the stock used. The unique lower is milled from a billet of 7075-T6 aluminum and is dedicated to the Glock-style magazine. Although some companies insert blocks into the magazine well to make that happen, the D3-9SD is a dedicated weapon. The billet-crafted lower receiver also sports a hardcoat anodized finish.

While D3 is currently developing an even shorter “K” version, the D3-9SD features an integrally suppressed barrel that is only 14 inches long, making it a nice small package for easy carry and use. And although it’s built as an AR-style weapon, designers have included an enhanced bolt carrier and a 9mm-specific brass deflector.

The D3-9SD comes with a 9-inch-long Aero Precision handguard featuring rails on all four sides or KeyMod slots for accessories like lights and lasers. My test rifle came with the quad-rail version. Completing the furniture set is a Magpul MOE-K2 grip and a collapsible stock that rides on two rails.

Although the D3-9SD is primarily chambered for the 9mm—like my test sample—D3 also offers variants set up to run .40 S&W, .45 ACP and 10mm ammunition. My gun weighs about 7 pounds unloaded, which is close to the standard weight of a full-sized M4 rifle. Some might question the weight, but it’s important to remember that this includes the suppressor. It’s a manageable weight that makes the gun easy to carry and also helps absorb felt recoil.

For those quietly grumbling about the long, drawn-out process of obtaining a suppressed, short-barreled, select-fire rifle, D3 feels your pain. Along with a version designed for the military and law enforcement worlds, the company also offers a semi-auto rifle for everyone else. National Firearms Act (NFA) rules obviously still apply, but this gem is obtainable. 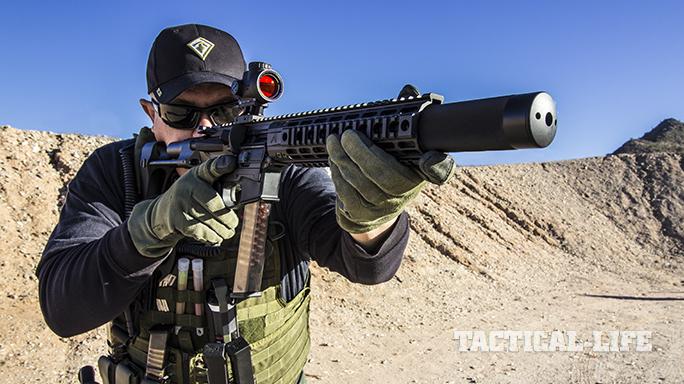 Making the claim of being superior to the HK MP5SD is pretty bold, so I scheduled a test of the D3-9SD. As mentioned, the gun I received was a select-fire version chambered in 9mm. My first impression was that it was light, well made and showed great attention to detail. The gun’s fit and finish are not an accident. And the designers at D3 understand that if they’re going to make a claim, they need to back it up. The only addition I made was a Trijicon MRO sight.

The range testing was enjoyable. First, I shot the gun for groups. Although they aren’t known for their superior accuracy, sub-machine guns are much more capable than some believe. For this test, I used three types of FMJs from Aguila, Federal and Remington. I fired five-shots groups from a bench with a bag supporting the weight of the weapon. This created a stable testing platform. Each load performed well in the D3-9SD. The best five-shot group at 25 yards—1.5 inches between centers—came with the Remington ammunition.

Of course, even during the accuracy portion of the evaluation, the focus was on the gun’s sound signature. D3’s claim of exceptional suppression held true during the testing. The gun was very quiet, even with standard ball ammunition. When using subsonic ammunition, the gun was almost comically quiet. I loaded a few magazines with subsonic 147-grain Magtech FMJs, and the gun became one of those silent weapons you’ll see in movies. The rifle was already hearing safe, but the introduction of subsonic ammo created a dramatic decrease in signature.

For the final ammunition test, I loaded several magazines with various duty and personal-protection rounds. Although it wasn’t as quiet as the subsonic ammo, the hollow-point ammunition was still hearing safe and ran well with no malfunctions. This was one of the more critical tests, as the gun can serve a dedicated duty weapon, and reliable functioning is the top priority in any test. 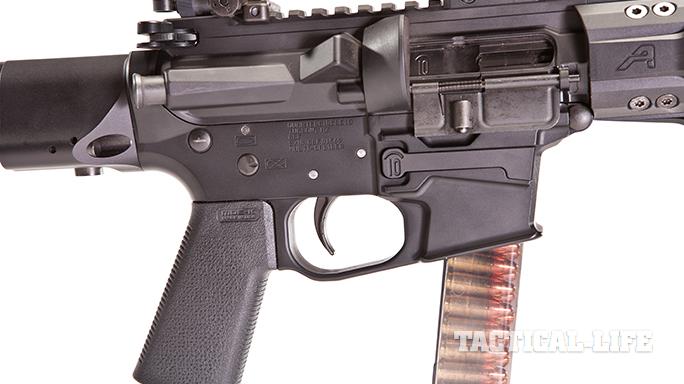 The shooting bench is not native territory for a submachine gun, so I let the D3-9SD off the leash and ran it as intended. That’s where it really began to shine. The gun was comfortable and easy to run. Unlike its German counterpart, the gun’s controls—including the safety—were easy to operate without changing my grip. The trigger on the demo gun was a standard mil-spec version, meaning it was a bit stiff, but that could be quickly remedied with a new drop-in trigger. The cyclic rate was well balanced, and the muzzle rise was negligible. My groups opened up as expected, but the accuracy still remained much better than that of other weapons. The gun’s 7-pound weight, combined with low-recoiling 9mm ammo, allowed me to quickly engage steel from super-close-quarters distances to 75 yards without any issues.

The gun gained extra stars when it came time to reload. The dedicated Glock magazine well allowed for fast, effortless reloads. The small size of the weapon made it feel as if I were reloading a large pistol instead of a rifle. My reloads were fast and smooth, letting me get back into the fight with only a momentary break in the action. To that end, the Trijicon MRO was a great choice for the gun, as its large, clear aperture made for quick target engagements. The gun and sight worked well from various non-traditional positions and around various barricades. At the end of the testing, I stood over a pile of brass, impressed with the rifle. 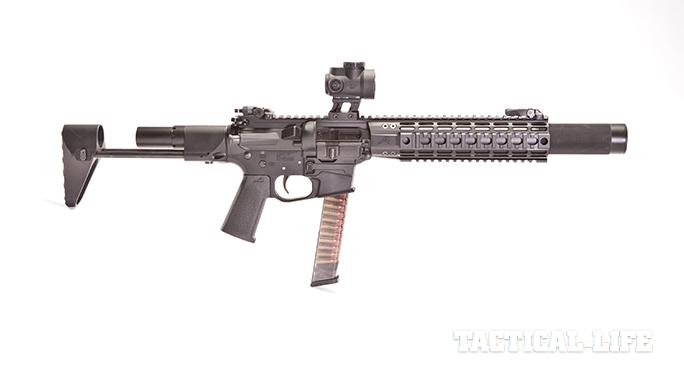 As a submachine gun instructor, I have a special place in my heart for the MP5SD and its magical standing in the gun world. That instructor responsibility, though, has let me see the challenges students face with operating the MP5SD. The D3-9SD, however, has addressed many of those challenges by taking the magic of the HK and putting it into an AR platform. It’s a brilliant move—one I support. Although the company isn’t currently a giant player in the firearms world, Desert Design & Development has fired a suppressed salvo that will be heard around the world.