The first Desert Tactical Arms (DTA) rifle my eyes gazed upon was handed to me in the field while taking a long-range shooting class at Sniper Country in Utah. It was the SRS model chambered for the .338 Lapua Mag. I became intimate with this unique rifle over the next five days and developed a tremendous amount of respect for the level of precision it delivered as well as its ruggedness. As cool as this rifle was, the DTA rifle that really caught my attention was the SRS Covert, a 7.62mm less than 28 inches long. 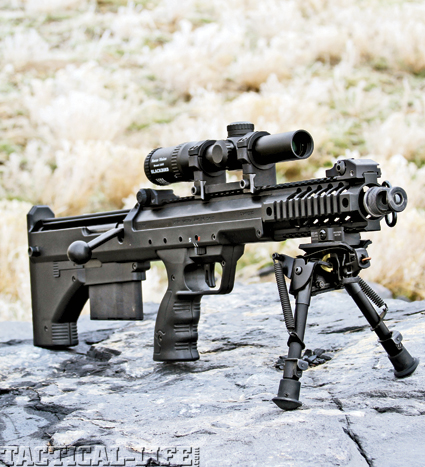 The SRS Covert bullpup sniper rifle’s full 16-inch barrel can quickly be changed out for other calibers, letting operators adapt the long-range weapon as the mission changes.

Nick Young with DTA told me, “The Covert rifle was obviously based off DTA’s original SRS rifle platform. We saw a growing trend among Special Forces operators using 16- and 18-inch-barreled rifles as their primary sniper weapons. So we did some measuring and figured out that if we put a 16-inch barrel on our SRS we could just barely meet the minimum overall rifle length of 26 inches. Any shorter would have placed this rifle in the short-barreled-rifle (SBR) category and would have required Class III licensing.” 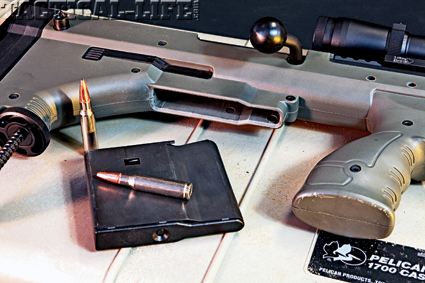 The Covert’s mags drop away easily and load reliably. Each mag holds five rounds, and shooters can learn to reload without changing positions with practice.

To understand how a 16-inch-barreled rifle could be so short only takes one look at the SRS rifle platform. Unlike a conventional bolt-action rifle, this rifle is a bullpup, meaning the action is behind the trigger mechanism. The rifle’s unique design makes this possible. By essentially building a stock around a barreled action and utilizing a creative trigger mechanism, DTA was able to position the pistol grip and trigger forward of the magazine and actually under the barrel. 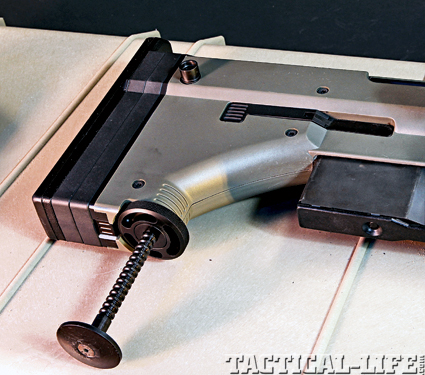 A built-in rear monopod extends about 3.5 inches from the base of the stock. Operators can do fine tuning adjustments to find the perfect support and get the perfect shot.