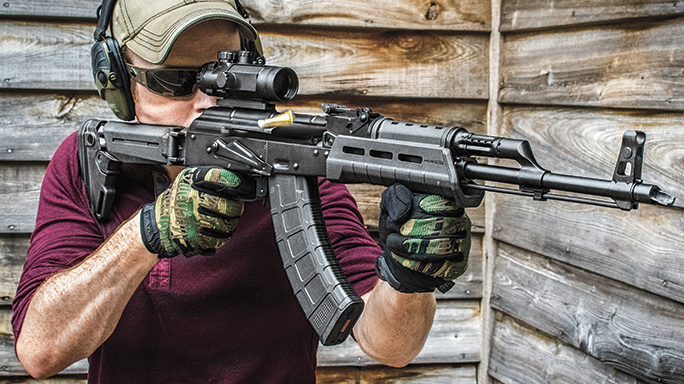 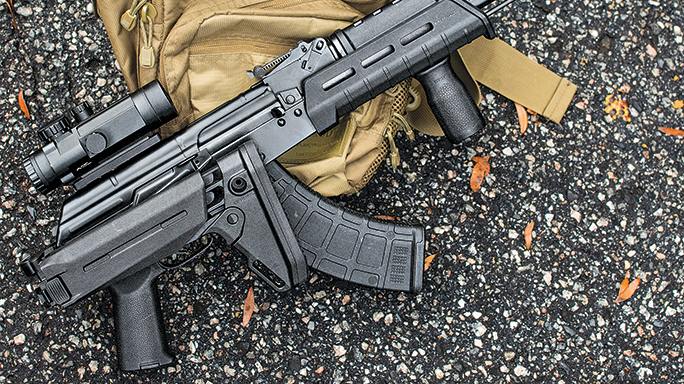 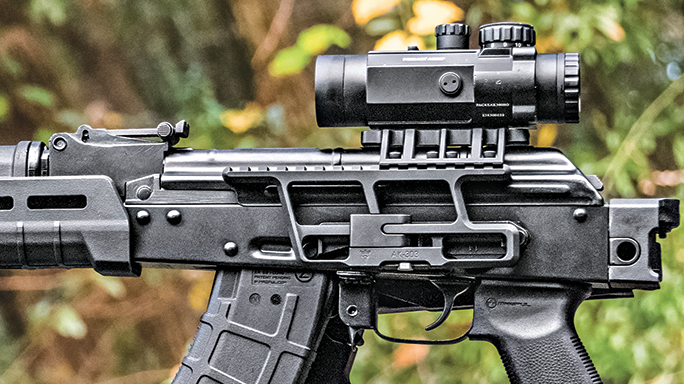 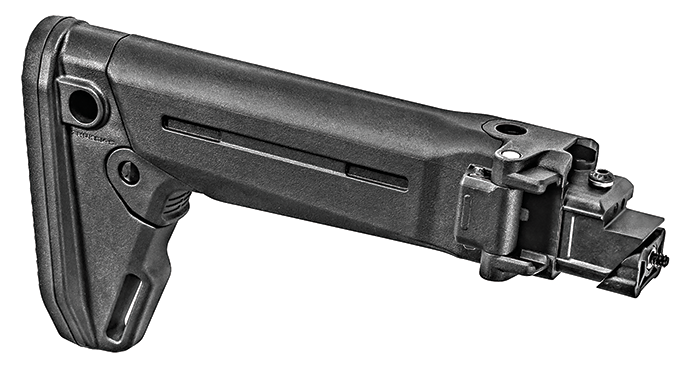 4 of 4
AmerAKan Steel: Destructive Devices’ DDIAK47SFMZM
The DDIAK47SFMZM features a few Magpul upgrades, including the lightweight polymer Zhukov-S buttstock. Note the sling loop on the toe. 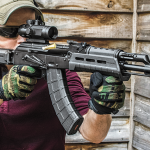 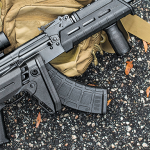 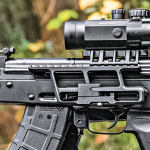 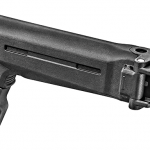 Shooters trying to divine the next big thing in AK carbines need only look at the AR-15. Just like that of the little black Armalite in years past, the AK market is experiencing meteoric growth, both in terms of aftermarket support and numbers of builders. While the ramifications of this are overwhelmingly positive, there are a few downsides: It is increasingly difficult to distinguish between junk and gold with such an oversaturated industry. One of the newer builders belongs in the latter category, making waves in the crowded trade: Destructive Devices Industries, or DDI. Nothing shows the company’s dedication to quality better than its new DDI-47.

Chambered in 7.62x39mm, the DDI-47 is a semi-automatic, rotating-bolt, long-stroke-piston-driven carbine that feeds from standard AKM/AK-47 box-type magazines. These mags are available in a dizzying array of capacities ranging from five to 100 rounds, though the more capacious magazines can more than double the rifle’s weight when fully loaded. But the DDI-47 saves weight thanks to DDI’s elimination of wooden furniture on this model in favor of polymer Magpul-made offerings.

At its core, DDI offers two main products: a milled AK-47 and a stamped AKM. The remaining models are simply variations of these two firearms with different furniture or finish options. For example, the precise model name for the AKM in this article is the DDIAK47SFMZM. No, it doesn’t really roll off the tongue. Which is unfortunate if only because it makes telling others about your rifle somewhat difficult.

Cryptic nomenclature aside, these rifles are excellent examples of what a builder can achieve when not concerned with purists. Instead of installing a prohibitively expensive rear trunnion designed for either Soviet or Bulgarian side-folding stocks, DDI chose Magpul’s new Zhukov-S stock for this model. It has the same side-folding functionality of its mil-spec cousins at less than half the price. Though the Zhukov-S has more than just economic advantages over mil-spec offerings, it also carries practical and ergonomic benefits as well.

New shooters attempting to better their marksmanship appreciate a properly fitting stock. Stocks that are too short can be adapted to, but if a stock is too long, it might require an improper stance or shooting technique. So while standard Warsaw Pact AKM stocks fit most shooters OK, an adjustable one is nearly always better. This is one of the primary advantages of the Zhukov-S stock. Not only can it fold to the right side for ease of storage and portability, it’s also fully adjustable for length of pull out to an extra 2.6 inches. Better still, because it’s smaller than Warsaw Pact stocks in its fully collapsed state, it fits more shooters than any other AK stock made.

Additionally, it includes a quick-detach sling mount in the perfect spot so tactical shooters can attach a single-point sling. This is just forward of the folding stock release button, which itself is conveniently oversized. This is ideal because it provides tactile feedback when searching for it in low- or no-light conditions. Lastly, the stock also includes a rubber buttplate with aggressive serrations that prevents the stock from sliding off a shooter’s shoulder during use, while soaking up felt recoil.

Unlike mil-spec Russian or Bulgarian folding stocks, the Zhukov-S interfaces with the receiver by means of a mil-spec AKM rear trunnion. This simplifies things and allows shooters to install any mil-spec buttstock they desire, like surplus wooden ones.

The DDI uses KG GunKote with a phosphate undercoat or on top of previously Parkerized parts. The advantages of this finish show as soon as a shooter toggles the safety lever a few dozen times. The bottom line is that the KG GunKote finish tolerates use and abuse much longer than a more traditional AK finish.

Another feature of the DDI is the TAPCO G2 fire control group, which is necessary for the rifle to meet 922r compliance. An industry standard, the G2 is a drastic improvement over earlier trigger options as it totally eliminates the notorious “trigger slap” on some earlier AKs available here.

Beneath the trigger is a Magpul AK MOE pistol grip constructed of the same ultra-durable, high-impact polymer as the buttstock. The Magpul grip makes a great alternative to military-surplus Bakelite or new-production polymer as it better fills the shooter’s hand. This in turn better positions the shooter’s index finger on the trigger for more consistent trigger pulls.

Above the trigger and pistol grip is a very important but often overlooked component crucial to building a better AK: the side rail. Unlike their Western counterparts, AKM rifles never truly evolved into optics-centric weapon systems. As such, the compatibility with optical gun sights revolves around the side rail mount.

Ensuring compatibility with existing optics, mounts and other accessories is pivotal. This is why DDI installs mil-spec Bulgarian-type side rails. While specs exist for AKM side rails, some countries have slight variations in dimensions and tolerances. Bulgarian-style mounts are among the most compatible type, however, fitting every AKM-specific side rail accessory I have tried.

Shooters looking to stretch the legs of their DDI-47 can truly appreciate these rails, since the iron sights on AK-pattern rifles and carbines don’t do a marksman any favors. The post and notch configuration and relatively short sight radius make precision work at distance challenging for all but the most eagle-eyed shooters. Even still, the DDI-47 is more than capable of effective hits out to 300 yards with only iron sights.

With quality optics installed, the AK is capable of potentially doubling this range out to 600 yards, but shooters looking to do so need to invest in optics with 7.62x39mm BDC reticles. While useful with any cartridge fired at longer ranges, it becomes more crucial with the 7.62x39mm round due to its dramatic ballistic arc. Again, thankfully more AK-centric optics are hitting the market every day and, thanks to the DDI-47’s rail, can be easily mounted.

Under the cover it’s a pretty standard AKM series affair, with one important exception. Instead of the shepherd’s hook retainer capturing the trigger and hammer pins, the DDI-47 utilizes a retention plate. This is a godsend for anyone who intends to either fully disassemble their rifle or install a different trigger. Reinstalling the trigger group on a standard AKM is obnoxious at best. It’s twice as frustrating if done without the proper tools. The retention plate can be installed or removed with one hand. While most shooters will never take their avtomat down to this level, it’s a welcomed addition for those who do.

Another great addition to the rifle is the Magpul AKM MOE handguard. Like all MOE handguards, the AKM variant supports M-LOK accessories. This allows shooters to mount either M-LOK rail segments or M-LOK-compatible accessories directly to the handguard without the need for an expensive, hefty, railed aluminum handguard.

Another benefit of the MOE over metallic offerings is heat dissipation. The polymer Magpul handguard does a much better job of keeping the shooter’s support hand comfortable during extended firing sessions. Despite back-to-back magazine dumps during testing, the MOE handguard was lukewarm, and far from uncomfortably hot.

But the DDI-47 is more than simply an exhaustive list of desirable AK features. While any chef will confirm a recipe must have great ingredients to be great, the way they are combined is nearly as important. Thankfully, DDI employs experienced, talented builders to make each rifle by hand. Quality components, an excellent finish and a superb fit—but does it all actually pay off?

The DDIAK47SFMZM I tested had arrow-straight sights and an even finish throughout. Furthermore, the internal rails-to-carrier fit is tight but smooth, like a thoroughly broken-in military bolt gun. The action doesn’t snag at various points of travel like more crudely built AK carbines, and the safety lever has positive but reasonable stiffness. In testing, the DDI-47 ran flawlessly across all types of ammunition and magazines, even when devoid of lubrication. While not advisable on any sort of long-term basis, it’s valuable to know if a firearm can run under less-than-ideal conditions.

I ran the rifle with several magazines, including common Romanian steel 30- rounders, Hungarian steel 20-rounders, Bulgarian polymer magazines of various capacities, Romanian and Chinese drum magazines, Russian Bakelites and others. This makes fully seating them in the rifle difficult if its magazine well isn’t properly built. Despite this, the DDI-47’s magazine well is generous enough to accommodate all standard AKM/AK-47 magazines without any wobble or fitting too tightly.

The carbine’s recoil was minimal regardless of the round fired. While ballistically similar to light .30-30 Winchester rounds, the rifle’s slant muzzle brake, rubber buttpad and long-stroke action soaked up most of the felt recoil. Ultra-recoil-sensitive shooters can further reduce this by installing a more aggressive brake.

The AK rifle continues to evolve in much the same way the AR-15 did a decade ago, with better ergonomics and increasing modularity. The biggest difference is that the AK directly benefits from the countless billions of dollars and millions of hours poured into similar refinements to the AR-15/M16.

The DDI-47 is a forward-thinking step in this exponential product refinement and growth. It bridges the gap between cutting edge and contemporary. Combining battle-tested operating methods with modern, lightweight, mission-adaptable furniture hones the AK rifle to a razor’s edge. It may not be the most contemporary design or the most modern, but shooters looking for an ultra-reliable carbine that can accept a variety of accessories and ammunition won’t find a better choice than the DDI-47. 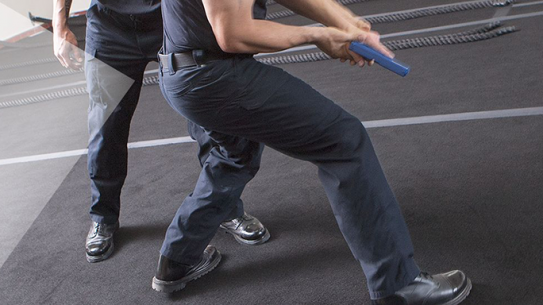 Made for both men and women, the all new Tactix Series Tactical Pants from...