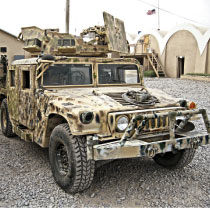 Planning Systems, Inc., part of QinetiQ, highlights recent in-theater evaluations of the latest addition to its “Ears” Gunshot Localization System product family known as SWATS (Soldier Wearable Acoustic Targeting System). They indicate that all members of the acoustic sensor family utilize a common  “palm-sized, 6.4-ounce sensor can be coupled with an individual operators’ interface or used in vehicles and at fixed locations. It responds with the direction and distance in less than a tenth of a second from the first gunshot being fired, without being confused by surrounding sounds, to accurately locate snipers in a 360 degree view, even when in use on a vehicle moving at speeds over 50mph.”

According to A. Donald Steinman, III of Qinetiq’s Technology Solutions Group, the Army’s “evaluation deployment” of SWATS started in January 2008 and placed “less than 50 systems” into those regions that had been experiencing sniper problems.

“That was the first man wearable deployment,” he explained.  “But the ‘Ears’ vehicle system has been in theater since August 2007.  It has primarily been in with SF [special forces] and we are getting very similar feedback from the SF.  As a matter of fact, some of your ‘best SF forces’ are very engaged with the capability and very excited about the capability.” The acoustic sensor detects the shockwave of the round passing as well as the muzzle blast out of the weapon, pairing those data to derive a range and a bearing to the sniper.  An integrated GPS and inclinometer allows the system to calculate a grid position for that shooter.

“We can provide that in MGRS (Military Grid Reference System) UTM satellite data,” Steinman said.  “And if you had some other derivative grid system I’m sure we could write the code to cross that over as well.” Steinman highlighted the ability to rapidly convert the man worn SWAT system to vehicle applications. We have a number of specific ‘mainline’ Army units that have gone and are employing the vehicle mounted systems,” he said.  “And the real value is that I can take this package off the man wearable, I pull it out of this sleeve, and with the same sensor I would have a fully functional vehicle system.  So if I’ve got the vehicle kit already installed, it’s three minutes from the soldier to the vehicle, and the vehicle has operational capability.  I can install the vehicle kit ad hoc–from vehicle to vehicle–in about 10 minutes.  If I want to do a ‘nice and pretty install’ it’s about an hour.”

In early October, QinetiQ announced receipt of a $9.95 million order from the U. S. Army’s REF (Rapid Equipping Force) for additional SWATS to be deployed to U.S. Army troops in both Iraq and Afghanistan this year, with the deployment expected to be completed by early next year. The company characterized the event as “the Army’s first large-scale deployment of any warfighter-wearable gunshot and sniper detection solution. The soldiers gave us feedback [from the evaluation deployment] and we acted on it,” Steinman said. “The result is a powerful, rugged, and lightweight gunshot localization system that helps the individual warfighter rapidly respond to dangerous situations.” Contact www.qinetiq-na.com for further information.