by Gary Paul Johnston
in Uncategorized
0

0
SHARES
2
VIEWS
Share on FacebookShare on Twitter
This U.S. Marine loved the D&L PPC and the SureFire 60-round mag shown here. He will soon deploy and wishes he could take both with him.

Quite alive and well, the old slogan “buyer beware” pertains to, well, everything we buy. A life-long, daily risk management drill, you ask? You bet, and firearms are certainly no exception. Take the AR-15 platform, but don’t try to count all the clones or you may hurt your eyes, as they can run the gamut of the good, bad and the ugly. Did you hear about the small quantity of aftermarket ARs last year that were equipped with bolts made in Turkey? Except for the bolts, the guns were fine. Sure, you can cut corners, but not at the corner of “bolt and carrier.” When you do, a big accident is waiting to happen. 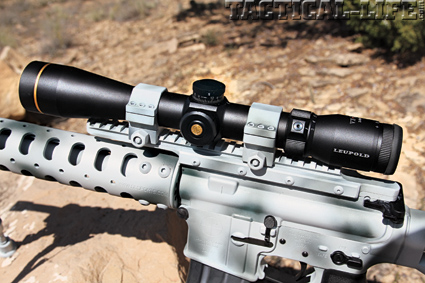 Case in point, an accident occurred while in the hands of a police officer who was the (short-lived) proud owner of the new AR clone. Fortunately, God was at the range when all six lugs sheered off, allowing the bolt to blow rearward without rotating. The upper receiver was destroyed and all other upper parts, except the barrel, were ready for a dirt nap. The lower suffered no damage and, most importantly, the police officer suffered only a face speckled by tiny aluminum shards, with his glasses saving his eyes. Yes, you can get what you pay for, but sometimes it’s worth less than the asking price. 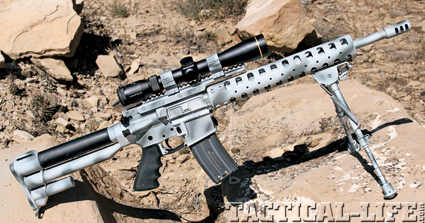 Even without its winter plumage, D&L’s Professional Perimeter Carbine would stand out in a crowd. Many of its features are unique to D&L Sports, including its aluminum stock, free-floating, ventilated handguard, and muzzle brake/flash suppressor. The scope tested with the rifle was a Leupold 3-9x42mm.

When compared with some, the AR-15-type rifle is a highly technical rifle; not only in design, but also in the mil-spec requirements assuring that it is made of the finest materials to the highest quality control. It isn’t rocket science, but it is vital to the operation and safety of rifle and operator. 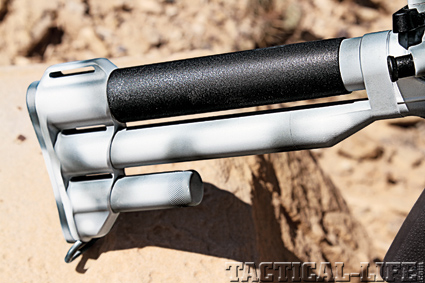