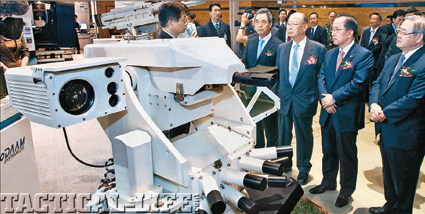 Korean government officials listen to a briefing on the Super aEgis II at a military trade show featuring an exhibit of the prototype weapon with a 40mm grenade launcher installed.

Few places on earth are more forbidding than the Korean Demilitarized Zone (DMZ), which divides the Korean peninsula roughly in half to separate The Democratic People’s Republic of Korea (DPRK) from the Republic of Korea (ROK), usually known as North and South Korea, respectively. Although most people assume the DMZ is on the 38th parallel, the boundary set after World War II between Korean zones of occupation by the Soviet Union and the Allies that became North and South Korea in 1948, the line actually runs 160 miles on an angle, with the western end near Seoul below the line of latitude and the eastern terminus above it. Both ends of the DMZ extend into Yellow Sea to the west and the Sea of Japan on the peninsula’s eastern side. 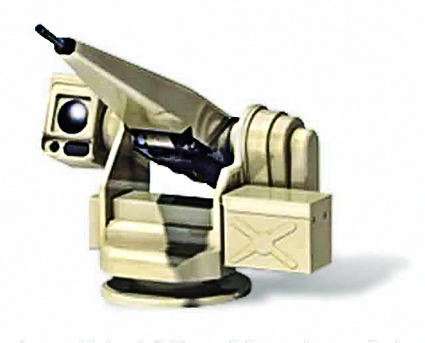 A prototype of the Super aEgis II weapon shows its sensor system and gun mount, offering a tremendous advantage in the area of fixed perimeter security.

On land, about two million troops stand at guard on either side of the border, and history has shown that North Korea has consistently been the aggressor, conducting raids in the South, digging huge tunnels for troops to move quickly into the South and firing artillery barrages. The potential for danger to soldiers in the DMZ is immense, placing ROK and U.S. forces stationed nearby in jeopardy—making them easy targets while they hold exposed positions and keep weapons at the ready. 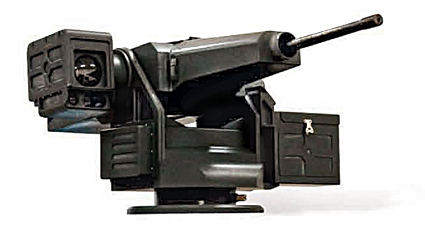 This is an example of the Super aEgis II perimeter security system that may already be in service on the Korean DMZ. The United Arab Emirates also is reported to have purchased the system for area security missions.

The situation hasn’t changed much in nearly 60 years. The DMZ is about 2.5 miles wide, with Northern and Southern Limit Lines created when both sides agreed to move forces back 2,200 yards from the location of the front in the DMZ’s center, known as the Military Demarcation Line (DML). Since negotiators signed the Armistice Agreement on July 27, 1953, the DMZ has consistently been the most heavily fortified and tensest border in the world, with huge armies—including nearly 30,000 U.S. military personnel— amassed near the border. 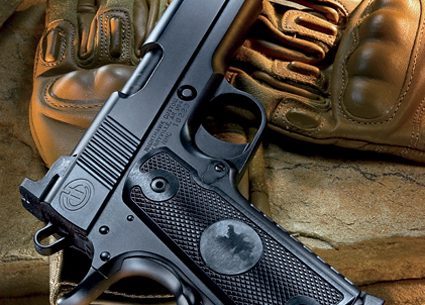