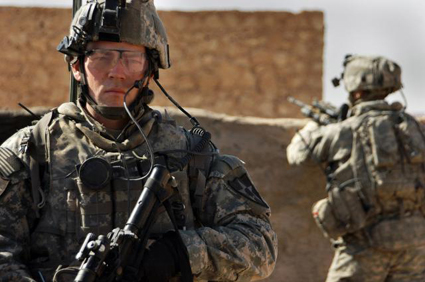 FORT BELVOIR, Va.– “Keep Up the Fire,” a new documentary produced by the Army’s Program Executive Office Soldier, tells the story of the first infantry unit deployed to Iraq with the Land Warrior system.

In 2007, the 4th Battalion, 9th Infantry Regiment, deployed to Iraq to help bring peace to a region paralyzed by war. With them, the battalion brought a vital system called Land Warrior, the most advanced piece of infantry technology ever fielded.

The Soldiers entered a brutal combat environment, where insurgent attacks numbered in the hundreds each week and American forces faced the mistrust of the people they had been sent to protect.

Despite the difficulties they faced, the battalion was remarkably successful during its deployment. Land Warrior, an advanced navigational and network communication system worn by Soldiers was a key to that success. Land Warrior consists of a wiring system, joystick-like control unit, a computing unit, and flip-down monocular eyepiece.

In its role as a navigation device, Land Warrior shows a Soldier’s location on a tactical map. Similarly-equipped Soldier and vehicle positions are constantly updated within the system, greatly increasing the situational awareness of the dismounted Soldier.

“Land Warrior gave me confidence as I planned to coordinate for a blind hit at night for the first time in this area,” said Capt. Brandon Kint, who used Land Warrior with the 4th Bn.

As a networking device, Land Warrior enables communication among Soldiers, vehicles, and commanders through one system. Additionally, Land Warrior creates organic networks between equipped units as they move into and out of contact with one another. Digital information can be exchanged between these equipped units and throughout the networks. For instance, Soldiers can place markers on the digital maps called “digital chemlights,” which will appear on the map of every other Land Warrior-equipped Soldier within seconds.

Originally developed in the early 1990s, Land Warrior was canceled just before the unit was set to deploy. By special request, the system was supported for the duration of the deployment to Iraq. Before and during their deployment, the battalion worked closely with the developers of Land Warrior to make changes to the system, increasing its effectiveness and usability.

The success and innovative work with Soldiers led to renewed interest in the program, so much so that a Stryker Brigade Combat Team will take an improved system to Afghanistan this year.

“It’s one piece of equipment that we won’t leave the (field operating base) without anymore,” said Master Sgt. (P) Marc Griffith, who deployed with Land Warrior and the 4th Bn. to Iraq.

FORT BELVOIR, Va.-- "Keep Up the Fire," a new documentary produced by the Army's…