by Len Waldron
in Uncategorized
0

5
SHARES
2
VIEWS
Share on FacebookShare on Twitter
Relentless and high-tech. This modern working dog, a Belgian Malinois, is wearing a K-9 Storm Intruder vest that includes an integrated camera, communications package and Kevlar side panels.

Evolutionary biologists tell us that our modern-day domestic dog can trace its roots back most directly to the gray wolf. Dogs and man have lived, fought, hunted and died with one another for thousands of years. In a remarkable testament to their ongoing ability to adapt and form close relationships with their handlers, working dogs now accompany humans on law enforcement patrols, jump from military aircraft and track everything from lost children to improvised munitions. The complexity of modern-day law enforcement and military missions calls for an evolved and stable dog that can adapt to constantly changing threat levels and respond proportionately with skill and courage. 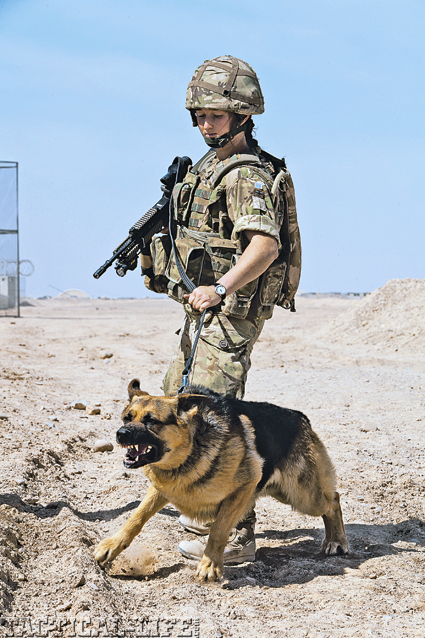 Making the Cut
Modern working dogs typically come from a small number of preferred breeds (German Shepherd, Belgian Shepherd, Belgian Malinois, and Labrador Retrievers are some of the most common), and of those, few make the cut for ultimate selection. For both military and law enforcement duties, nearly 30 percent of candidates are eliminated for reasons such as unstable temperament, lack of courage or poor athletic ability. Erich Grasso, a trainer and breeder of working German Shepherds in Connecticut, stresses the value of proper breeding and selection programs. “Between 24 and 36 months old, the dog’s character is fully formed. We have to see strong nerves, which means an ability to handle stress. These dogs must go from boats, to patrol cars, to planes and all the while be around people. They have to have a balance of fight, drive and sociability. Show dog lines or dogs bred simply for profit without quality control often result in weak-nerved dogs that will bite from fear or fail to handle a dynamic environment.” Such skills and characteristics do not come cheap. Over time, a healthy dog can be expected to serve for eight to 10 years. 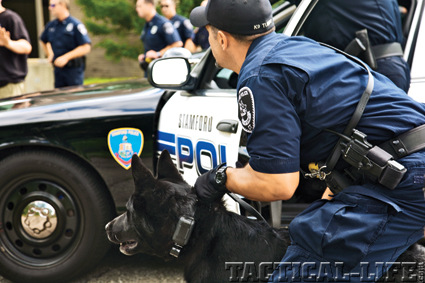 A Stamford, Connecticut, PD officer and his canine partner stand ready to engage a suspect in a high-risk traffic stop training exercise.

Raising the Warrior
So how does a dog go from a sock-chewing puppy to a street and battlefield warrior willing to HALO from a high-performance aircraft or accompany a law enforcement officer down an alley behind a crack house? The first step is environmental conditioning. “You would be surprised at what will upset a dog, get his mind off the task at hand, and thereby put everyone in danger.” says Grasso. “We take our dogs to parking garages, put them in shopping carts and push them around where people are coming and going, slamming doors, honking horns, kids are screaming and tires are squealing. The cart is rattling, the dog is not in control of where it is going and there is a lot to adjust to. Fairly quickly, it’s all just a fun game, but they can’t be expected to adapt if all they have seen is a manicured backyard before they hit the street. Sometimes adaptation is totally out of context, but the habit of stabilizing themselves in strange environments is what we are trying to instill.”