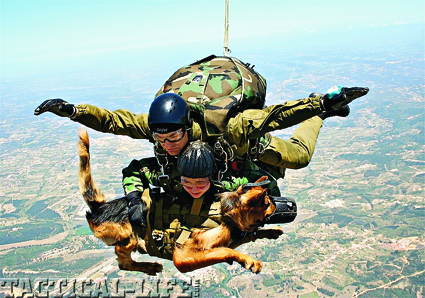 Highly trained bomb-sniffing dogs can skydive into action with their handlers. Muzzles are worn for protection and dogs are calm when jumping as they don’t perceive height as humans do.

During WWI dogs were used for a wide array of tasks. In addition to the traditional duty of guarding installations, dogs searched for casualties in “No Man’s Land,” carried messages when telephone lines had been cut and hunted for rats in the trenches. From WWII through Afghanistan and Iraq, U.S. military working dogs have acted as sentry dogs, patrol dogs, explosives dogs, and narcotics dogs. And, of course, thousands of dogs have acted as military mascots offering unconditional love to troops far from home.

One of the most common uses of military working dogs today is as sentry dogs that patrol installations and warn of intruders. On command or if their handler goes down, these dogs will attack an intruder. Sentry dogs are widely used by Air Force and Naval security units to patrol the expanse of a military base. Many dogs are also used as scout or patrol dogs to warn of nearby enemy, to protect their troops from ambush. Many of these dogs are trained as trackers as well and can be used to track enemy such as those who have planted IEDs. Scout dogs have also warned of snipers or other dangers out to 1,000 yards. Because of their sensitive hearing, some dogs can also detect a mortar or rocket attack before the soldiers with whom he serves. Military working dogs have also proven very useful in crowd control.

Multi-Mission Sniffers
In Iraq, many dogs are deployed as explosives dogs that are trained to warn of explosive devices nearby, or which may be used to check vehicles or buildings for explosives. Narcotics dogs are generally used in the LE role to check if troops have drugs hidden in their barracks or if vehicles are being used to smuggle drugs. Narcotics dogs and handlers may also be supplied to friendly forces to help in drug eradication efforts until they have their own trained drug sniffers. Note that many, but not all, explosives dogs are cross trained both as police dogs that may be used for security duties or crowd control, and explosives detection dogs. Some military explosives dogs, such as those USMC dogs based at Quantico or USAF dogs based at Anderson AFB, aid the Secret Service by carrying out searches related to Presidential security. 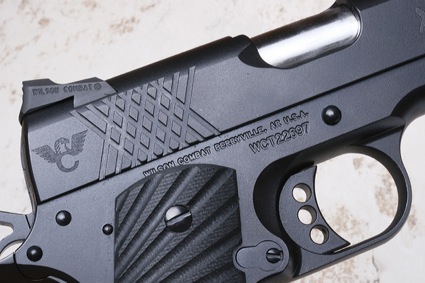 Highly trained bomb-sniffing dogs can skydive into action with their handlers. Muzzles are worn…