0
SHARES
4
VIEWS
Share on FacebookShare on Twitter
These three 6mm Berger bullets (from left to right) have a BC of .511, .486 and .391. Note the longest bullet has the highest BC and needs the faster twist of 1-in-8 as compared to the 1-in-9 and 1-in-10 twist rate needed by the two shorter bullets.

The uniqueness of handloading your own ammunition is that you can create ammunition that offers performance not commercially available from factory-loaded ammo. This performance can be in the form of better accuracy, different terminal performance or even better external ballistics. Often, handloaders select bullets with extremely high ballistic coefficients (BCs) in an effort to develop loads that shoot flatter and faster.

A bullet with a higher BC is better at bucking the wind and cutting through the air. This lets these bullets shoot flatter when fired at the same velocity as a bullet with a lower BC. Because bullets with a high BC cut through the air more efficiently, they retain their velocity better. This means they shoot flatter and arrive at the target sooner.

A bullet’s BC is a product of its shape. Although the actual BC is a number that is relatively complicated to determine, bullets with a high BC share a common theme: they are long and sharp and often have a boat tail on the backside. In simplest terms, they look sleek and more aerodynamic than bullets with lower BCs. 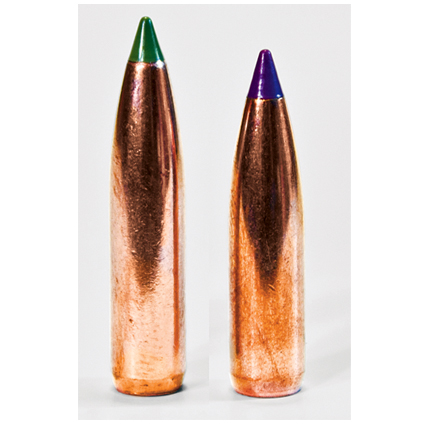 These two 6mm Nosler bullets weigh the same, but one is a slight bit longer than the other. Longer enough that it needs a twist rate about 20 percent faster than the shorter bullet.